The perforation (from latin perforare literally for "pierce") or perforation is the piercing of hollow or flat objects. The regular arrangement, quantity, shape and size of the holes play a role, especially in technology.

In addition to the many areas of application mentioned below, special perforations can also be found in industrial applications. In the area of ​​surface, filter and sieve technology, perforation is often the decisive factor. The perforation, in terms of size, shape and arrangement, results in particular from the goods to be processed or the behavior of the medium to be processed or used in a process. Solids generally behave completely differently here than liquid media. In the case of solids, it is usually a matter of sieving or separating the goods or the medium using different or adapted special perforations. Like there are flour, sand, dust, powder, small parts, grain, round vegetables and fruits, or the separation of soil, like with potatoes, or chaff with grain.

Surface technology is a special area. Here in particular the heat treatment of metals, coating and painting or in the area of ​​electroplating.

Here a company from Menden began to investigate the properties of the different perforation geometries in the mid-1990s. The result was the patented sickle and sinus perforation, which has been further developed to this day. In the meantime, these perforations, some of which are patented, have become the standard in the field of surface technology and heat treatment. 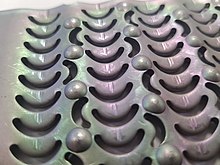 Perforations in a sheet metal

In the context of film and photography , perforation is the regular punching of photographic films and cinema films for the purpose of transport and positioning.

With cine film there is no perforation hole for the height of each individual picture , with 35mm film there is eight for the width of each picture.

Dickson first used the perforation on roll films for his cinematograph in 1893, allowing 70 mm film, cut lengthways, to run horizontally in the apparatus. The Lumière brothers also used a perforating machine for their 35 mm film , but they let it run vertically through the machine.

In photography , Oskar Barnack first used cinema film in 1914 to develop the original Leica , which was then marketed as the first modern 35mm camera from 1924.

Slit and hole punching in paper or cardboard for separating a sheet or part of a sheet. Manufacture in continuous printing (e.g. with dot matrix printers) also with letterpress (such as the Heidelberger Tiegel - platen printing presses) or generally perforating machines , sometimes also in offset printing machines by gluing the perforation lines to the impression cylinder and using the blanket as a counter-form. A perforation is measured in teeth (see also leaf shape: spreading edge ) or inches .

In medicine , a perforation refers to the breakthrough or penetration of tissue that encases a body cavity. The term is used in a variety of ways:

In anatomy, for example, the veins that connect the deep and superficial venous system on the leg are called perforating veins . These vessels pierce (= perforate) the fasciae of the legs on their way .

Perforations can also occur in accidents involving sharp objects. Falling on a point is called a stake injury . Even after knife attacks or gunshot wounds, perforations must be ruled out or repaired.

Iatrogenic perforations are unintentionally created by the doctor during a therapeutic measure. When scraping the uterus, for example, there is occasional unwanted perforation of the uterine wall. This can spread germs into the abdominal cavity and cause peritonitis . The dentist speaks of a perforation if, for example, the maxillary sinus was opened during a root canal treatment .

The problem with chemical pressure impregnation is that the most important construction timber, spruce, is very difficult to impregnate. The shallow penetration depths of usually just a few millimeters are generally not sufficient for effective protection of wooden components. In order to improve the impregnation of spruce wood, perforation has been used since the 50s of the last century. This method consists in making slots or holes in the wood surface in a relatively narrow grid, that is, "perforating" the wood to a desired depth. The perforation of the wood increases the absorption of the wood preservative.

The perforation is the point at which the conveyed material (crude oil or natural gas) flows into the conveyor system.

Leather as a cover material for furniture is partially perforated for better ventilation.