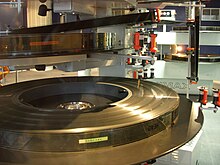 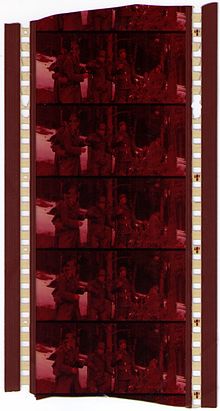 70 mm film (or 65 mm film) is a film format for motion pictures . Corresponding 70-mm roll film is also used in medium format - Photography used. This film format is only rarely used for feature films, and if so, then often only for special recordings or parts of a film. Film strips that are more than 35 millimeters wide are generally referred to as wide film.

Compared to the normal image ("Academy") on normal film with a size of around 350 mm², the image on 70 mm film offers more than three times as much area and thus more richness of detail and scope for larger enlargements, ie larger screens. The aspect ratio of 2.2: 1 is similar to that of CinemaScope without the need for anamorphic lenses.

For processing, a 70 mm positive is usually made from a 65 mm negative. The negative can be narrower, since only four magnetic sound strips have to fit on the positive . In early processes such as Alberini Panoramica or Fox Grandeur , 70 mm negatives were used in Europe and the USA. In the former Eastern Bloc countries , however, the combination of 70 mm original and 70 mm copy was retained (e.g. DEFA-70 and Sovscope-70 ). The currently available 65/70 mm processes are Super Panavision 70 , Ultra Panavision 70 , CineSpace 70 ( Todd-AO ) and Arriflex 765 .

A special feature is the special venue process 70 mm 8/70. This format uses 70 mm film with an image through eight perforation holes with vertical film travel. This results in the aspect ratio of 1.26: 1, which is shown in special cinemas with flat or slightly curved screen walls ( 180-degree cinemas in Omnivision).

DTS is the only system that includes a 70mm digital audio format. It thus offers a replacement for the expensive and maintenance-intensive 70 mm magnetic sound for both copy machines and movie theaters . This offer was not able to establish itself on the market despite a possible considerably better sound quality for the cinema-goer.