This article deals with the multichannel sound system. For further meanings see Dts .

DTS (originally: D igital T heater S ystems ) refers to a multi-channel sound system from the Californian company of the same name, DTS, Inc. , which can be used in the cinema as well as on laser discs , DVDs , Blu-ray discs , special audio CDs and on D-VHS is used, whereby the versions for cinema and end users differ fundamentally from a technical point of view.

DTS Inc. was founded in 1990 by scientist Terry Beard and several investors. The first film produced with DTS was Jurassic Park (1993), which DTS supported with just five employees. Within six months, 876 DTS systems were installed in cinemas worldwide. In 1996, devices that could play DTS became available to private consumers for the first time.

DTS discs from "Lord of the Rings"

The DTS film sound is located on one to three CD-ROMs , depending on the length of the film, and is data-reduced with the APT-X100 at a data rate of 882 kbit / s. The CD-ROM carries five discrete channels. The LFE is not a separate channel, but is transmitted in the surround channels. During playback, the surround channels are split at 80 Hz and distributed to the subwoofer and the surround speakers. 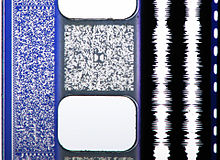 Different audio formats on one 35mm film. The DTS timecode can be seen on the far right

The sound is synchronized with the film by means of a time code (consisting of dots and lines similar to a barcode ), which is located between the optical sound track and the actual image and is read out with a small scanner. The sound is tracked even if the film is torn or pictures are missing. If the time code fails or is illegible, the sound is played from the CD for about three seconds before switching back to a replacement sound source. This is usually the optical soundtrack (now mostly in Dolby SR), but depending on the configuration it can also be another digital sound source such as Dolby Digital or SDDS .

Usually, a SMPTE time code modified for the DTS system is recorded on film copies with 30 blocks per second, in which the number of hours serves as the roll or act number. The maximum time code length is limited to 36 minutes and 24 seconds and is therefore completely sufficient for a single act.

In order to prevent the wrong CD from being played, the timecode of the film copy and also the DTS CD contain a serial number which is checked for consistency during playback and the inserted CD will only play if it is the serial number of the copy acts. A block containing serial replaces a regular timecode block on the film copy at certain intervals. Later, the number of serial blocks that occurred was used as encryption, which prevented a CD from being played on the DTS processor only coupled with a time code generator and an unauthorized copy being made.

The first DTS decoders had two CD-ROM drives, later three, which increased the maximum total film length from 206 to 309 minutes. A DTS system basically consists of a 386 - PC with two or three SCSI CD drives and two special decoder cards.

In contrast to SDDS and Dolby Digital, with DTS the surround delay is already integrated on the CD and cannot be changed.

Another development is the DTS effects channel. With this, controlled via the time code, up to six effect devices ( stroboscopes , smoke machines , etc.) can be controlled in the hall. In autumn 1997, the Rear Window Captioning System was introduced for the film The Jackal , a further addition to the DTS standard. Subtitles for the hearing impaired are stored on the CD . These are then mirrored on a light line in the back of the hall. If you want to read the writing, you can hang a mirror (provided by the cinema) on the seat of the person in front and read the subtitles.

Shortly after Dolby introduced the 6.1 expansion Dolby Digital Surround EX with Star Wars: Episode I , DTS offered a similar system with DTS-ES. In contrast to the home versions, the cinema versions of the expansion are compatible between the two manufacturers. DTS-ES CDs have a 5-digit serial number starting with 6.

DTS can be retrofitted to all common cinema projectors . It is the only common digital sound system that is also suitable for 70 mm film . A scanner only needs to be mounted on the corresponding projectors for playback . In the commercial cinema , however, the 70 mm film format has hardly caught on.

Digital cinema according to the standard of the Digital Cinema Initiatives only provides uncompressed pulse code modulation for the sound , so that classic cinema sound systems such as DTS or Dolby Digital are no longer necessary there.

DTS is marketed as an alternative to Dolby Digital and, like the competing system, uses compressed audio data that is generated using a lossy process. The data rate used for laser discs and CD is 1234.8 kbit / s, with DVD up to 1509.75 kbit / s is possible, but this is rarely used.

The bit rate of DTS audio tracks on video DVDs is either 754.5 or 1509.75 kbit / s. The data rates are thus significantly higher than with Dolby Digital. The soundtrack is a LFE channel contains the only responsible for the low frequency response subwoofer served. The full-frequency channels range from 20 Hz to 22 kHz, the bass channel ranges up to 80 Hz (with Dolby Digital 5.1 up to 120 Hz). The coding method used is called Coherent Acoustics.

DTS CDs can be used to produce multi-channel sound on CD .

The DTS system for the end user has been further developed and supplemented many times: