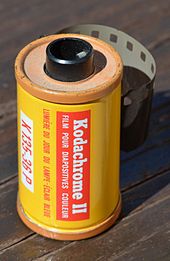 A photographic film is the light-sensitive recording medium of an analog camera (camera for photography) or an analog film camera . The term is derived from the original meaning of the term film as a thin layer on another material.

Originally, film was only used to refer to the thin layer of photo emulsion with which the surface of a photo plate was coated. With the invention of celluloid and its use as a film carrier, a change in meaning took place. Today, film is understood to be a transparent film made of tri-acetate or polyester coated with a photo emulsion .

Film was the leading method of analog photography (image recording), but has been supplanted by digital recording methods in most areas since the beginning of the 21st century.

Film material describes the physical carrier of the medium film, i.e. a photographic film strip in a defined recording format .

Film material includes, among other things:

After the film is exposed in the camera, the film must be developed . Standardized, automated processes or manual processing according to various recipes can be used for this.

During development, the latent (hidden) image is made visible. Germs in the light-sensitive emulsion created by light are catalytically reinforced by the development process. The stronger the exposure, the more elemental silver grows in exposed areas. A negative is created.

When reversal film , the z. B. is taken for slides, in the context of the so-called reversal development , a negative development is also initially carried out, namely as a black-and-white image. The developed film is then exposed to diffuse light, the silver salt not yet exposed during the exposure being exposed. In the subsequent color development with a special color developer, the oxidation products of the developer substance and the color couplers contained in the film emulsion form the three dyes yellow, magenta (purple) and cyan (blue-green). The water formed in both silver development processes is now in a bleaching bath converted back to silver salt which is removed at the same time a bleach-fixing bath or in a subsequent. All that remains are the dyes that generate the positive image on the basis of subtractive color mixing . As a final step, the film must not fixed , are provided, as is usually the case today, no bleach-was used. Fixing removes the remaining light-sensitive substances and thus prevents the image from darkening when exposed to light.

Subsequent rinsing removes the remains of the chemical substances in the (bleach) fixer (final rinse).

Wetting agents are often added to the water in the final wash in order to achieve streak-free drying. Finally, the film is dried in a drying unit or by hanging it up.

according to the way the light is processed

In the case of a negative film, all colors are reversed; for example, in the case of black and white negative films, white is black and black is white, the corresponding gray values ​​are converted accordingly.
In the case of color films, complementary colors are shown.
The reversal is not reversed until the film is copied onto photosensitive photo paper, other film, or electronic media.

With slide film, the colors are displayed according to the original photographed after the development process.

Black and white negative films can be turned into a slide using a special development process. Films for which this is offered commercially are the Agfa -Dia-Direkt (discontinued), the Agfa-Scala and the Fomapan R (eversal). There were also black-and-white reversal cine films e.g. B. from Agfa in two sensitivity levels: Isopan-F reversal film (15 DIN / ASA 25) and Isopan-ISS reversal film (21 DIN / ASA 100), each made up as 8 or 16 mm narrow film. There are various methods, including a. an approach developed by Klaus Wehner, Paderborn, to produce black and white slides from almost every ordinary black and white film.

In principle, silver salts are mainly sensitive to blue. The photographic layer can, however, be sensitized to other color components of the light. The conversion of the colors into gray values ​​depends on this - as well as on the use of appropriate filters. Orthochromatic films are relatively insensitive to red light, panchromatic films are also sensitive to red light and reproduce the brightness levels more naturally. Individual films often show an increased sensitivity to red (hyperpanchromatic).

Film formats that are no longer available are:

Film can for the completely new daylight color film Perutz C 18 (18 DIN) in 1958. The resulting slides were considered to be particularly pure and color-saturated.

The films are available in different light sensitivities (so-called film sensitivity ). With increasing sensitivity, the resolution of the film decreases, since the light-sensitive crystals become larger and larger and can also be seen in the photo as so-called grains .

More sensitive films have poorer color fidelity and a loss in contrast range. In addition, the higher the sensitivity, the higher the price. The sensitivity is given in DIN grades (German Institute for Standardization) and ASA values ​​(American Standards Association). The DIN information is based on a logarithmic scale. A number higher by 3 means a doubling of the sensitivity. The ASA values ​​are based on a linear series. A sensitivity of 24 DIN / 200 ASA has been the standard for color negative films since the late 1990s. Slide films are usually 21 DIN / 100 ASA. Most 200 ASA slide films are overlaid 400 ASA films, so they are visually and financially not worth buying.

For several years, the specification of the film speed has been standardized internationally in the ISO 5800 standard.

The resolving power of photographic films is given by the number of pairs of lines just separated per millimeter. Since the photographic resolution depends on the contrast, black and white lines are chosen. In terms of quality, one also speaks of coarse-grained and fine-grained films. It depends on the properties of the film, particularly the sensitivity of the film material, and the developing conditions. In general, a highly sensitive film has a coarser graininess. Commercially available 35mm films have a resolution of 40 to 150 line pairs per mm. With black and white document films, significantly more resolution can be achieved, reaching up to 1000 line pairs per mm. These are not originally films for pictorial photography, but very high-contrast films for the reproduction of documents that have to be processed very carefully using special chemicals. Examples: Agfa Copex, 720 Lp. with negative image; Eastman ImageLink Films 5360/7360 and Kodak 2468 (now made by Eastman Park Micrographics), both orthochromatically sensitized, low speed direct reversal films, 900 to 1000 lp. Pure bichromate gelatine films resolve more than 5000 line pairs per millimeter, e.g. B. Orwo HF 53 (holographic film).

Decline due to digital photography and today's market situation

The following parts of the development of the film markets in detail seem since 2012 is out of date to be : Up to a terse statement that Kodak 2015 Ektachrome and Ilford has introduced in 2019 a new film, the detailed analysis includes the individual film markets only values up to 2012. How have the markets developed until today (2020)?
Please help to research and insert the missing information .

Since the peak of photo film sales, depending on the country in or around the year 2000, global sales have declined radically due to the success of digital photography , since 2004 by more than 20% per year compared to the previous year. An end to this trend was not in sight in 2012. Depending on the market, the decline between 2000 and 2012 is around 94% to 99%.

A consolidation of the film market has been evident since 2015. Manufacturers such as Eastman Kodak and Harman Technology, producer and distributor of the Ilford film brand, have already reintroduced old films, such as the Kodak Ektachrome E100 slide film. In 2019, Ilford launched the orthochromatic black and white film Ortho 25 for 35mm and medium format.

In Germany, sales of photographic films to end consumers peaked in 2000 with 191 million units and sales of 660 million euros. By 2011 this market had collapsed to 14 million units or 45 million euros, which corresponds to an average annual decline of 21%. A further decrease of 20% to 11.3 million films or 37 million euros was expected for 2012. This corresponds to 5.9% of the sales volume in 2000, so the film market in Germany would still be at a significantly higher level than, for example, in Canada or the USA (see below).

Film market in the USA and Canada

As things stand today (April 2014), these companies produce films for pictorial photography and in some cases also for cinematography: