This article is about Eastman Kodak , founded in 1892 . For the photo and document division, which was spun off in 2013, see Kodak Alaris , for the Kodak fortress see Kodak (fortress) . 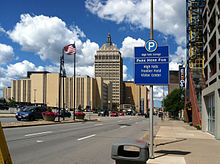 The Eastman Kodak Company is a multinational company that was founded in the 1890s and was formerly one of the world's most important manufacturers of photographic equipment, especially film material . Kodak was a leader in developing the amateur markets ahead of German and later Japanese competition.

Kodak "lost touch with the advance of digital images". The US company emerged as a specialist in digital printing from bankruptcy proceedings. "

Eastman Kodak was listed on the S&P 500 stock index.

The corporate headquarters is located in Rochester , Monroe County in the state of New York in the United States .

The following important information is missing from this article or section:
Kodak Pharmaceuticals - see
Help Wikipedia by researching and pasting it . 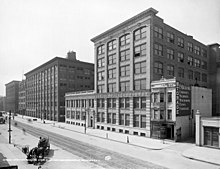 The company Eastman Kodak Company of New York was in 1892 from the Eastman Dry Plate Company indicates that of the inventor George Eastman was founded and the businessman Henry Strong 1880th Kodak is a fantasy name invented by George Eastman that should be short and to the point. The name should also be spoken in all languages ​​of the world and not have a negative meaning in any language. The name and logo were registered with the German trademark register on October 29, 1894 and registered on April 5, 1895.

Kodak produced roll films and from 1888 also industrially manufactured cameras , including the Kodak No. 1 , the Brownie and later the Instamatic , which could also be easily operated by amateurs; Kodak made photography a popular pastime in the United States.

Engagement in Germany between the world wars

In 1921 the subsidiary Eastman Kodak Ltd. (London) together with the Heidelberg gelatine factory Stoess & Co. GmbH under the name Chemische Werke Odin GmbH in Eberbach, the first German-American joint venture after the First World War. The company was dissolved on Christmas Eve 1939 after it had been placed under enemy property management at the beginning of World War II.

In 1927 Kodak took over the film manufacturer Glanzfilm AG in Berlin-Köpenick and, at the end of 1931, the August Nagel camera factory in Stuttgart-Wangen ; The cameras made in Germany therefore had the suffix Dr. Nagel - Stuttgart plant .

From the mid-1930s, Kodak advertised in brochures with statements such as “German the camera” , stated that “1,500 people were given work and bread” and processed “the best local raw materials” . From 1940, the Kodak plant in Stuttgart switched to armaments production . 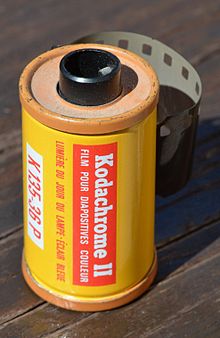 The color slide films of the Kodachrome series introduced by Kodak in 1935 set the quality standard for decades, but also required a complex development process . These films were first as 8mm cine film and, starting in 1936 as a 35-mm-mm film assembled . In the 1930s there was a competition between Agfa and Kodak to introduce the first color negative films suitable for the market. 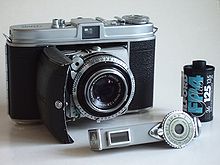 Manufactured in the Kodak factory in Stuttgart: Kodak Retina 1b

Brands for photographic films introduced later include the Ektachrome slide films based on the Kodak E-6 development principle, the Kodacolor negative films for paper prints and, at the end of the 20th century, the “color world” negative films.

The Instamatic films introduced in 1963 and the pocket films launched in 1972 proved to be very successful and each gave a powerful boost to amateur photography with color films. The Super 8 films presented in 1964 also achieved decades of success.

At Photokina 1976, Kodak presented instant cameras , whereupon Polaroid sued for patent infringement. The legal dispute was lost for Kodak, the production of instant cameras was stopped on January 9, 1986 and the cameras in circulation were bought back. For the Kodak PR 10 instant film , there were exposure devices from the Durst company to create paper images from slides, as well as an additional device for the Agfa Family Super 8 system (see Super 8 ). 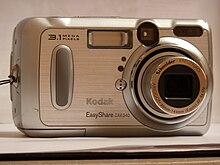 The Kodak Disc System, introduced by Kodak in the 1980s , became a failure: today there is no disc material, nor can it be commissioned to print from disc negatives. The background to the development of this negative format were considerations to simplify handling in the large laboratories: developing machines for the discs could be equipped more efficiently and were significantly smaller than developing machines for films. (see photo finishing ).

In 1987 Kodak manufactured the world's first digital SLR camera , the Canon New F-1 Electro-Optic Camera . As a result, other cameras based on Canon and Nikon reflex cameras appeared. 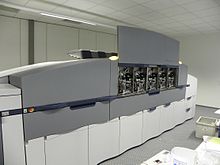 In the digital photo sector, Kodak was one of the pioneers with the Kodak Photo CD (1992) and later with the Kodak Picture Disc . Regardless, the company suffered severely from the sharp decline in sales of its analog films. In Germany, all of the company's large laboratories were sold in 2004 (sometimes followed by bankruptcy soon), and staff were cut worldwide.

In early 2004, Kodak announced the end of sales of Advanced Photo Systems (APS) cameras . They want to concentrate more on the market for digital photo devices. APS, only introduced by Kodak, Fujifilm, and some camera manufacturers in 1996 , was ultimately a failure. Also in 2004 the range of films was reduced and the further development of the film material stopped.

In late 2005, Kodak stopped manufacturing black and white photo paper . The increasing spread of digital cameras was cited as the reason for the - actually historical - decision . By 2008, Kodak had cut 12,000 to 15,000 of the 60,000 jobs at the time. Contrary to previous announcements, Kodak introduced new films again in 2007.

In March 2009, Kodak signed a licensing agreement with Sakar International under which Sakar would market cameras, photo and computer accessories under the Kodak brand. In 2009, after 74 years, the production of the world's first color slide film Kodak Kodachrome, which had been commercially successful for decades, was discontinued.

In the process of digitizing photography through 2010, Kodak had undergone several restructurings, sales of divisions and strategic realignments. The number of employees has fallen dramatically. Kodak has u. a. focused on the professional photofinishing and printing sector.

As of December 7, 2011, Kodak stock has been under one dollar. This threatened Kodak with exclusion from the NYSE , since the NYSE does not tolerate penny stocks, and with it the loss of further investors. Kodak rejected bankruptcy rumors as speculation, but filed for Chapter 11 bankruptcy on January 19, 2012 . On September 3, 2013, it was released from bankruptcy protection proceedings.

In 2012, Kodak stopped producing digital cameras, video cameras, and digital picture frames. The company wants to focus on the printer business. In 2012 the production of slide films was also discontinued; the online platform Kodak Gallery was sold to the competitor Shutterfly.

In 2012, it was announced that Kodak operated a neutron source for materials testing and neutron radiography in a basement of its Rochester headquarters between 1974 and 2006 . The facility contained 1.6 kilograms of highly enriched uranium.

At the beginning of October 2012, the production of the high-speed black and white film Kodak P3200 T-Max was discontinued.

On September 3, 2013, Kodak sold its photo film production and thus gave up the former core business. The new company Kodak Alaris was born. In October 2013, the company ran its European headquarters in Eysins (CH) as well as the inkjet demo facilities, which were previously located in Gland (CH), and the “Technology and Solutions Center” for Europe, Africa and, previously located in La Hulpe , Belgium the Middle East in one location.

Past and present products