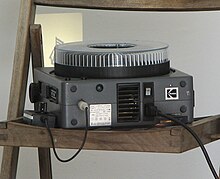 With Carousel will slide projectors indicated that a round magazine work. The best-known projectors based on this functional principle come from the Kodak company . Due to the widespread use of these devices, the term carousel has established itself as a generic brand name for projectors with round magazines.

Kodak projectors work with magazines for 80 or 140 35mm slides and have been built in many variants since 1961; the design was revised in 1963 by Hans Gugelot . The production was stopped in 2004 with the last slide projector series Ektapro . The Kodak devices were built with different features and lamp outputs. The projectors are still considered extremely robust today and are still widely used standard devices.

The round, ring-shaped magazine with the slides is placed on the projector and rotated step by step by a motor. The slide currently to be projected only slides down under its force of gravity into a slot between the projection lamp and lens. For the next change, it is lifted mechanically and the magazine is moved further to lower the next slide.

The slide change (one step forwards or backwards) can be controlled manually with push buttons on the projector itself or with a cable remote control.

The adjustable timer function can be integrated in the projector or it can be plugged into a socket on the back of the projector as a small, cube-shaped additional part of around 4 × 4 × 4 cm with several contact pins. In both cases, the frame rate can be set using a small rotary knob.

The slide change can be programmed using signal impulses on a tape track and a control unit so that the audio playback from the tape (or cassette) results in a synchronized multimedia presentation of picture and sound. Compared to the video (tape) recorder of earlier times, a more detailed and interference-free image quality could be achieved with a very permanent function.

Carousel slide shows run continuously on exhibition stands, in shop windows, museums and for art presentations. When projecting - space-saving - via a mirror and / or on the back of a translucent projection screen, the slides must be oriented accordingly in the magazine; however, the projector itself must always be roughly level. It is precisely the simple gravity drive of the slide movement downwards that makes the device so squeak-free and reliable. Only bent or gaping slide frames need to be straightened in order to "fall" freely. After a power failure, the device continues to run by itself.

Other companies, such as Rollei , also produced circular magazine projectors; in these, however, the slide was transported in the classic way, which led to limitations in the long-term usability.

Depending on the type, the magazines can hold 80 up to 3 mm (1/8 ") thick slides measuring 50x50 mm (2x2") or 140 thin (maximum 1.5 mm (1/16 ") made of cardboard (from Kodak) or To remove the magazine from the projector, turn it to position (compartment number :) "0". Exactly then the only blind compartment is above the slot in the sliding sheet metal base of the ring magazine, which then secures all up to 80 or 140 slides against falling out.

At the top, a likewise ring-shaped dust cap (or a retaining ring) closes the magazine. This cap made of transparent plastic can be put on in several rotating positions, i.e. just by feeling, the bayonet then clicks into place and the cap can be securely locked with 2 hands by turning it slightly to the right. In the box, the magazine can be stacked to protect it from dust, and in a box it can also be placed upright on a bookshelf.

The advantage of this principle is the simple and robust mechanical design as well as the possibility of continuous projection without a break for the return transport required for long magazines. The slides are secured in the magazine against falling out during transport. Disadvantages are the comparatively high costs for the complex magazines and the large amount of space required for storage.

Use in the theater

The musical production of Mike Batt on the subject of The Hunting of the Snark used 152 of the projectors, which were arranged in pairs and projected 12,000 slides in the course of the play.