Illumination system of a slide projector:
left: concave mirror to increase the amount of light; Lamp;
right: condenser , 2 lenses, heat protection filter in between ; Dia (not shown; its holder is usually just after the right condenser lens) 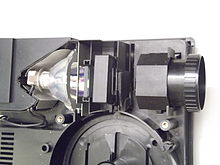 The lighting system determines the type of use of a slide projector. Criteria are the size of the slides, the required luminous flux and the uniformity of the illumination. On the imaging side, the focal length of the lens determines the size of the projected image and the projection distance to the screen . The beam path of the lighting system and the imaging lens form an interwoven beam path .

The lighting consists of the lamp, the concave mirror behind it and the condenser lenses. The light from the lamp shines through the slide and the luminous element of the lamp is shown in the lens. The lens projects the backlit slide onto the screen.

For smaller slides, an ellipsoid mirror lamp can be used instead of the condenser lens in front of the lamp. Here, too, there is an interwoven beam path and the luminous element of the lamp is shown in the lens.

The light source, the lamp has changed considerably from candles, kerosene light , incandescent lamps , halogen lamps to metal halide lamps . In the course of this series of developments, the achievable luminous flux (measured in lumens), the luminance of the light source and its color temperature increased towards daylight. The increase in the light yield, in the case of electrically generated light the efficiency of the generation of light from consumed electrical power, measured in lumens per watt, reduced the fundamentally undesirable radiation of heat (infrared) from the light source, which heats the slide through absorption. The process-related inevitable absorption of visible light, especially in the dark areas of the slide and the frame, leads to the slide being heated; thermal radiation (high temperature) arriving here is also absorbed and heats up the slide. Simple incandescent lamps only emit around 5% of their electrical power as visible light, 95% as heat. Part of the heat is dissipated via heat conduction (via socket and connecting wires), another part via convection of the ambient air or blown cooling air, the majority of the filament radiates outwards through the lamp bulb according to Stefan-Boltzmann's law .

The energy flow through thermal radiation is even higher with metal halide lamps than that through the proportion of visible light. Slides are made of plastic (or glass) and usually gelatine (the photo layer) and are therefore only temperature-resistant to a limited extent, as are frames made of plastic or cardboard. In glassless slide frames , the film material is not kept flat and, with one-sided exposure, typically bulges in the center of the image in the direction of the lens after a few seconds, since essentially the side facing the lens with the photo layer absorbs light and heat radiation and this side is gradually heated to a higher temperature .

Various strategies serve to reduce the thermal radiation to the slide:

All elements of the beam path, including the slide, are now cooled in parallel by a fan that is as quiet as possible. Blowing hard on the lens is not necessary because it sits on the cold end and because dust deposits are particularly undesirable here.

A small amount of ultraviolet in the light, which would have a particularly strong bleaching effect on color pigments, is readily absorbed by the glass elements (heat protection filter and condenser lenses).

Housings for projectors without fans were built higher to achieve a favorable chimney effect. Projectors with light from flames typically have small chimneys. Its bell-shaped end at the top serves to prevent the undisturbed laminar upflow of the hot exhaust gases with an inflammatory effect .

The projection lens is used for the optical-geometric mapping of the projection template on the screen. It is generally made up of 3 to 5 lenses in order to largely correct imaging errors.

The lenses are designed with a fixed focal length or with an adjustable focal length as a vario lens. Further designs are shift lenses and the CF lens (Curved Field), adapted to the curvature of a slide that is not framed between glass and that has heated up during projection.

When changing the focal length of the lens, the image field lens can be changed or used in a different position in the lamp housing to adapt the interwoven beam paths .

For focusing, the lens must be movable in the optical axis, for example by means of a coaxial thread guide.

The relationship between projection distance A and image size B on the screen results from the ratio of the focal length f of the lens to slide width b.

Remarks: It is assumed that the focal length f is much smaller than the projection distance. The nominal size of the slide is specified, for example, for the recording format as 24 mm × 36 mm, but the mask in the slide frame has a size of 23 mm × 35 mm.

The projected image is usually focused on the screen by turning the lens. This changes the distance between the lens and the slide. This set distance can change due to different slide frames. In addition, the slide is heated in the beam path during projection and bulges, it "jumps". The automatic focus adjustment corrects this change by moving the lens and restores the manually set distance.

In the case of projectors with manual slide feed, the framed slides are brought into the projection beam path individually using an interchangeable slide or via a chute.

Round magazines are particularly suitable for endless presentations. These magazines are also designed for different capacities depending on the manufacturer. In the case of magazines that are arranged horizontally like a carousel above the projector, the slides are guided into the lighting beam path from above; in the case of magazines that are arranged like an upright wheel next to the lighting system, the slides are pushed sideways into the beam path. Round magazines are also intended for slides of nominal sizes 3 × 3 cm and 5 × 5 cm.

The history of slide projection goes back to the beginnings of the magic lantern , described by Joh. Bapt. Porta back 1589. The first projected templates were shadow projections or drawn templates. Until the 35mm slides were made through photography, initially using coated photo plates , and then 35mm film, and the first 35mm slide projector from Leitz came onto the market in 1926.