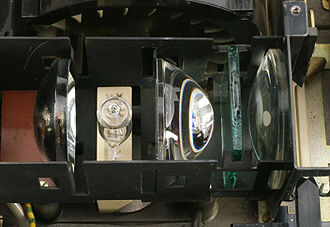 A condenser consists of one or two converging lenses and is used in the lighting device of an imaging optical device. Such devices that work with lamp light are projectors ( slide projector or enlarger ) or microscopes . The condenser has the task of introducing as large a portion of the light from the projection lamp as possible into the imaging beam path. It is also important to ensure that the image is evenly illuminated.

The condenser images the filament of the lamp in the opening of the imaging lens, so that instead of the filament, its enlarged image becomes the entrance pupil of the lens and a greater image brightness is created.

It is attached close to the object to be depicted. It thus remains a field lens (especially since field lenses are usually arranged at the location of an intermediate image) that does not affect the image of the object, but improves the image brightness.

The lighting system consists of a condenser lens (s) and a lamp, and usually a spherical mirror , which roughly doubles the amount of light involved in the projection. This often includes a heat protection filter , which is located between the two lenses when the condenser is two-part.

In order to save installation length and use more light from the lamp, the condenser is often built with a large opening angle (large numerical aperture ). This causes so-called aperture errors ( spherical aberration ), which can lead, for example, to uneven illumination of the image. The situation is improved by distributing the imaging function of the condenser to several appropriately corrected lenses. The double condenser then contains an aspherical and a spherical converging lens.