Beam path in a concave mirror

A concave mirror that is used to concentrate rays at its focal point (focus) (e.g. sun rays when using solar energy in solar power plants ) is called a burning mirror . 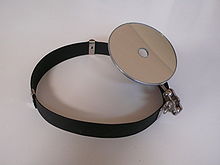 The head mirror is still, for example, to study the larynx used

The French doctor Pierre Borel , member of the Paris Académie des Sciences , used the concave mirror as an examination instrument in the 17th century. For the purpose of medical examinations and better illumination of body openings, he constructed a concave mirror to reflect and focus the light on the object to be examined. Slightly modified, concave mirrors are still used today as forehead mirrors or reflectors in medical diagnostics.

Analogous to spherical and aspherical converging lenses, there are also two designs for concave mirrors. The more complex and expensive design has the advantage of largely suppressing the spherical aberration .

Only with the parabolic mirror are all the light rays incident parallel to the optical axis bundled exactly in the focal point (focus). The parabolic shape, however, is somewhat more complex to manufacture than the spherical shape.

spherical shape as a section of a hollow sphere

A parabolic mirror can be approximated for small angles of curvature by means of a spherical surface, with an accuracy that is sufficient for many applications. A spherical mirror is much easier to manufacture than a parabolic mirror, so it is often preferred.

The optical property of the concave mirror is determined by the radius of the sphere, the wall segment of which it represents, the so-called radius of curvature. If you place an (imaginary) point light source in the center of the sphere , the mirror reflects the light from the source back onto it. If the light rays come parallel from infinity , the mirror reflects them to the focus (focal point). This is roughly halfway between the center and the mirror. The focal length of a concave mirror is half its circle radius. However, due to the spherical aberration , the combination of the light rays is only imperfect there: the light rays form a figure known as catac acoustics near the focus . (In contrast, this is avoided with the parabolic mirror.)

The considerations are made under the assumption that they take place in an angular range where the spherical and parabolic mirrors behave approximately the same.

Concave mirrors are used, among other things, as main mirrors in mirror telescopes , in optical spectrometers and monochromators, and as shaving mirrors . The satellite dishes for television reception or radar antennas also work on the same principle, but for the radio waves related to light.

Similar to the convex lens , a virtual image is created when the object distance is smaller than the focal length (see magnifying glass ). A typical example is the cosmetic mirror , which has only a slight curvature and thus a large focal length. The focal length is therefore greater than the distance between the observer (who in this case is the object) and the mirror.

The shape of the mirror is variable, with concave mirrors it is usually round, with a normal mirror often embedded on the back . The cosmetic mirror usually also has a frame so that it can be placed upright or hung up.

NoteAlthough no virtual image is created if the object distance is the same as the focal length, an observer can recognize an image because the eye can generate a real image on the retina from the parallel rays of each pixel reflected by the concave mirror. The eye has to be accommodated to infinity . The same applies to the magnifying glass when the object is in the focal plane.

In the magazine Der Spiegel there is a column on the penultimate page with the title Concave Mirror . There are funny, curious or involuntarily comical newspaper clippings, newspaper headlines, advertisements , clippings from operating instructions, etc. quoted.