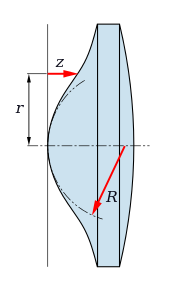 Arrow height with an aspherical lens

Formula according to DIN ISO 10110 Optics and Photonics - Creation of drawings for optical elements and systems , part 12 Aspherical surfaces with:

The paraxial behavior of the aspherical surface is only determined by the curvature of the apex .

Calculation on a plano-convex lens 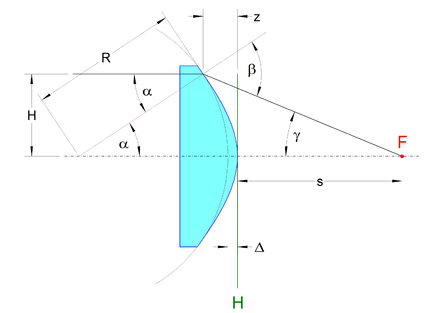 To the cutting length s in an optical image having a plano-convex aspherical lens having the principal plane H (green), the focal point F (red), the refractive index n = 1.5 and the radius of curvature R at a given incidence height H .

Using a plano-convex lens , the shape of the corresponding aspherical surface can be illustrated relatively easily. If one looks at an optical image from infinity with parallel, monochromatic light through such a lens with the radius of curvature at the height of incidence , the situation shown in the figure on the right results.

In order to calculate the aspherical surface, rays of light can be considered which, with the height of incidence parallel to the optical axis , fall on the flat lens surface on the object side. These are not broken when entering the optically denser medium of the lens material with the refractive index , since they strike perpendicularly . On the image side, these rays form the angle to the surface perpendicular of the lens in the lens and outside the lens the angle . These angles behave as described by Snell's law of refraction . The following relationships apply:

These rays then intersect the optical axis at the angle

For paraxial rays ( ) is an image-side gives back focus respectively focal length of:

where the radius is at the vertex of the lens on the optical axis.

The arrow height , measured from the main plane of the lens, can then be determined iteratively as a function of the height of incidence with the help of some auxiliary variables starting from and in steps of :

The following applies to the back focal length from the vertex of the sphere with the radius on the optical axis:

Finally, the vertex distance from the main plane results from the difference between this focal length and the focal length for paraxial rays : 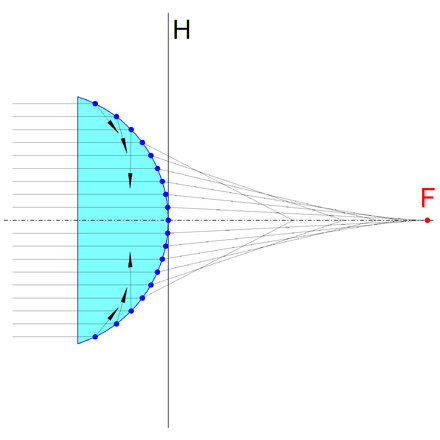 Design of a plano-convex, spherical lens with the heights of incidence H in steps of ten up to ± 90 with a refractive index of 1.5, a constant radius of curvature of 100 and a focal length of 200. With increasing height of incidence, the focal length measured by the main plane H continues to decrease, and Incident rays with heights of incidence of ± 70 and greater amounts are even totally reflected within the lens and therefore do not even contribute to the optical imaging. Only rays close to the axis intersect the optical axis in the vicinity of the focal point F.

Design of a plano-convex, aspherical lens with the heights of incidence H in steps of ten up to ± 100 according to the example table with a refractive index of 1.5, a radius of curvature at the vertex on the optical axis of 100 and a focal length of 200. The same results from the for all heights of incidence Main plane H measured back focal length, and all refracted rays intersect the optical axis at the focal point F.

The following table shows some example values ​​calculated in this way for , and the unitless linear dimensions and . As the height of incidence increases, the radii of curvature become larger and larger and both the centers and vertices of the corresponding circles move further and further away from the main plane on the object side.

Up to a height of incidence of 140, the convex surface of this lens according to DIN ISO 10110-12 (see above) without further aspherical parameters in the higher links corresponds relatively precisely to the relationship for a hyperboloid with the conical constant k = -2:

Aspherical surfaces can be made by a number of processes:

Grinding is the oldest, but also the most complex process for producing aspherical glass lenses. There have been camera lenses with such lenses for several decades, but until the molding process was ready for series production, they were limited to particularly high-quality and expensive lenses. Since the year 2000, machine technology based on CNC controls has developed so much that today (as of 2013) the use of CNC machines for the production of aspheres is common practice. CNC machining also enables quartz crystals or optics with large diameters to be machined, which cannot be produced at all or not in the required quality by means of molding.

This method, which is cost-effective for series production, is often used for camera lenses, condenser lenses and for laser pick-up optics, for example in DVD players .

As a magnetorheological polishing ( English Magneto Rheological Finishing , MRF) refers to a polishing method of optical components such as lenses. The method can also be used for local correction.

Ion-beam figuring (also called ion-milling ) is a surface processing process in which the material is removed by means of an ion beam , a sandblaster at the atomic level , so to speak .

The optics can be deformed during grinding by the application of force; it is then ground spherically. The spherical surface is demolded after releasing the tension and thus results in the asphere. An example of this is the Schmidt plate , which is deformed by a negative pressure and then ground flat on one side.

Alternatively, a spherical surface can be deformed into an asphere by the application of force.

Metrology plays a decisive role in the manufacture of aspherical lenses. A distinction is made between different measuring tasks depending on the manufacturing process and processing status:

A distinction is made between tactile, i.e. touching, and non-contact measurement methods. The decision as to which process to use depends not only on the accuracy but also on the processing status.

Tactile measurements are carried out between two grinding steps in order to control the shape of the asphere and to adapt the subsequent work step. A section over the surface is measured with a so-called button. Due to the rotational symmetry of the lens, the combination of several of these profiles provides information about their shape. The disadvantage of tactile methods is the possible damage to the lens surface by the button.

Interferometers are used when sensitive or completely polished surfaces are measured. By superimposing a reference beam on the beam reflected from the surface to be measured, error maps, so-called interferograms, are created, which represent a full-surface deviation of the surface shape.

Computer-generated holograms (CGHs) represent a method for interferometric determination of the deviation of the lens from the target geometry. These generate an aspherical wavefront in the target shape and thus enable the determination of deviations of the lens from the target shape in an interference image. CGHs have to be specially manufactured for each test item and are therefore only economical for series production.

Another possibility is the interferometric measurement of aspheres in partial areas, with minimal deviations from the best-fit sphere, and then combining the partial measurements into a full-area interferogram. These are very flexible compared to CGHs and are also suitable for the production of prototypes and small series.