Total reflection of light at an interface between glass and air

The total reflection is a phenomenon that particularly in connection with electromagnetic waves (e.g., visible light ) is known. It takes place at the interface between two non- absorbing media with different speed of propagation when the angle of incidence exceeds a certain value, called the critical angle of total reflection . A wave then no longer predominantly enters the second medium, but is almost completely reflected or “thrown back” into the source medium . Below this critical angle, the degree of reflection at an interface is not zero, since a non-negligible part of the radiation is always reflected at an interface.

The idea of ​​a total, i.e. complete reflection of a wave is an idealization , because in practice a part of the completely reflected radiation is always lost through absorption . For visible light, for example , the amount absorbed can be neglected in highly transparent materials such as water and glass. Nevertheless, the structure of the interface can lead to a reduction in reflection even with highly transparent materials. In such cases, one speaks of prevented total reflection .

Total reflection can be easily observed with visible light when it hits the interface with air in a transparent medium such as water or glass (see figure). At a steep angle of incidence, the light emerges refracted. Only a small proportion is reflected (around 4–5% for glass). If the angle of incidence exceeds the critical angle, the reflectance increases by leaps and bounds to almost 100% and is thus higher than with most mirrored surfaces.

A light beam that comes from an optically denser medium ( refractive index ) and falls on the interface with an optically thinner medium (refractive index ) is refracted away from the normal of incidence according to Snell's law of refraction - the angle of refraction is greater than the angle of incidence of the light . This case corresponds to the green beam path in the adjacent figure.

For angles of incidence larger, the angle of refraction would have to be larger than 90 ° according to Snell's law of refraction. This is in contradiction to the requirement that the refracted beam passes into the optically thinner material. The electromagnetic wave (e.g. light) can no longer penetrate the optically thinner medium and instead of the refracted beam is completely reflected at the interface (only applies to completely transparent materials, i.e. the extinction coefficient is zero in the corresponding wavelength range) . The angle of reflection (angle of reflection) is like the "normal", external reflection equal to the angle of incidence (red beam path). One speaks therefore of a total reflection.

Evanescent fields behind the interface with total reflection. The directions of propagation of the waves are shown in yellow.

The mechanisms of total reflection are somewhat different from, for example, reflection on metallic surfaces. From Maxwell's equations it follows that the electromagnetic wave cannot suddenly change its direction of propagation at the interface. A standing wave forms on the surface, which also penetrates the subsequent optically thinner material. The field strength of this wave in the following material decreases exponentially. The penetration depth (see also London equation ) describes the depth at which the amplitude of the decaying ( evanescent ) wave only has approx. 37% (more precisely: 1 / ) of the initial amplitude.

Description of the evanescent wave:

Another special feature of total reflection is a beam offset, the so-called Goos-Hänchen shift , observed in experiments . H. the origin of the reflected wave does not correspond to the point of incidence of the wave.

The physical description of total reflection makes some simplifying assumptions. The reflection on two infinitely extended, dielectric half-spaces (transparent materials) is considered, which of course does not correspond to the real processes. However, the approximations made are sufficiently accurate for most cases.

Some effects cannot be explained with these simplifications. For example, if infrared light is totally reflected at the interface between an (infrared transparent) prism and air, the spectrum of the totally reflected infrared radiation contains absorption lines of carbon dioxide and water vapor . The reason for this is the evanescent wave, which interacts with the optically thinner medium, that is, certain radiation components are absorbed by the optically thinner medium. These frequency and material-dependent absorption components (absorption centers of the second, optically thinner material) are visible in the reflected beam. One speaks in this case of the attenuated total reflection (Engl. Attenuated total reflection , ATR). This effect is used, among other things, in ATR infrared spectroscopy .

Another effect occurs when an optically denser material (refractive index comparable to that of the first material) is placed behind the optically thinner material. Depending on the distance to the interface at which the total reflection takes place, parts of the evanescent wave are transmitted into the third material. This leads in turn to an intensity attenuation of actually totally reflected wave why one of the hindered or frustrated total internal reflection (Engl. Frustrated total internal reflection , FTIR, not to be confused with Fourier transform infrared spectrometers and spectroscopy) or by optical Tunnel effect speaks. This effect is only clearly measurable when the distance between the first and third material is less than about twice the wavelength of the incident wave. 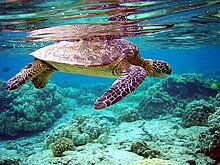 Green turtle with totally reflected reflections on the water surface

The sparkle of cut diamonds , the "white" color of sugar crystals or fibrous materials such as paper - provided they are not wetted by liquids - are largely due to total reflection. Rays of light enter the materials, but only come out of them again after a more or less large number of total reflections.

The water of the Toplitzsee in Ausseerland has an increased salinity from a depth of about 20 m due to natural brine inflows (see there ). At the haloclines at the transition from the optically denser medium (salt water) to the optically thinner medium (surface water with less salt), total reflection occurs to a large extent in various layers of water, reflected or scattered light rays remain “trapped” (as in a solar pond ), resulting in the well-known “black” Water ”of the Toplitzsee (which is not a moor lake ).

Double total reflection in a prism

In the visible light range, most materials have a higher refractive index than vacuum (or air). This is used, for example, in deflecting prisms and in optical waveguides . Here the total reflection occurs at the transition from the optically denser medium (prism, fiber core) to the optically thinner environment (air). In the glass fiber, the thinner "environment" is i. A. Another type of glass. In this way, light can be directed in a desired direction with almost no loss. Fiber optic cables can transport information in the form of light up to 20,000 meters without the need for amplification.

Another form of beam splitter can be implemented using the prevented total reflection. Here, two prisms are placed at a very short distance (in the range of one wavelength of the light) from one another, part of the wave is reflected and the other is transmitted into the second prism. The ratio between the two components can also be set via the distance. This principle is used, for example, in holography or as an optical switch for transmission using optical fibers.

The effects mentioned are also used in various ways in measurement technology. Attenuated total reflection has been used in infrared spectroscopy (more precisely ATR-IR spectroscopy) since the late 1960s . Due to the low penetration depth, thin and highly absorbent materials such as aqueous solutions can also be examined. Disturbing interferences, as can be observed when measuring the transmission of thin layers, do not occur. A similar advantage arises in fluorescence microscopy and especially in TIRF microscopy. The low penetration depth there means that significantly less material is stimulated to fluoresce, which results in a higher contrast. Furthermore, the mostly sensitive organic material is destroyed less quickly.

The refractive index of all materials is slightly less than 1 ( vacuum ) for X-rays , in contrast to the visible range, where it is almost always significantly greater than 1. Since the values ​​usually only differ after the seventh decimal place (i.e. 0.999999 (x)), this area is often specified instead . Typical values ​​for are in the range between 10 −9 and 10 −5 and depend on the quantum energy of the radiation, the atomic number and the density of the material.

This makes it possible to achieve total external reflection at the grazing incidence (θ against 90 °) at the transition from vacuum to matter (ie from “optically” denser to “optically” thinner medium). The total reflection of X-rays is used in X-ray optics ; for example, capillary optics are based on this principle.

An absorption of the material can also be represented in the refractive index . In this case the refractive index is a complex number, the imaginary part of which represents the extinction coefficient . This results in the display options (i.e. ). Most materials are almost transparent to X-rays, so the extinction coefficient is usually less than 10 −6 (but here, too, there are differences between the materials of several orders of magnitude up to 10 −14 ). (The point of the complex representation is that the amplitude of a wave can be formulated as.)