The numerical aperture (symbol , NA or nA , from Latin apertus , dt. Open ) describes the ability of an optical element to focus light . The term was introduced by the physicist Ernst Abbe . In the case of lenses , it determines the minimum size of the light spot that can be generated in its focus and is therefore an important parameter that limits the resolution .

Mathematical description and connection with the resolving power 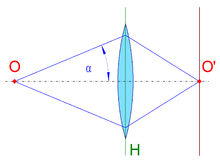 The numerical aperture results from the product of the sine of half the object-side opening angle ( acceptance angle ) and the refractive index n of the material between the objective and focus (see also immersion (microscopy) ):

The numerical aperture is therefore a dimensionless quantity , i.e. a pure numerical value.

An optical element, such as an objective, is characterized by its magnification , its numerical aperture, the optical working distance and the rear imaging distance. Mathematically correct, the opening angle is determined by a diaphragm in the rear focal plane of the lens, but the construction of the first lens is the limiting factor. This is also approximately correct, as explained in the context of Fraunhofer diffraction . It is noteworthy that the object under the microscope is so small that the lens, which is usually only 1 mm away, is in the far field, as the near field only extends over the range of a few wavelengths.

The maximum resolution is the minimum distance between two distinguishable structures . In microscopy, the size of the focus is limited by diffraction and is proportional to the wavelength of the light used and inversely proportional to the numerical aperture:

As a rule of thumb, there is the following relationship for estimating the maximum resolution:

In a vacuum or in air and with a large opening angle ( ) the estimate is:

Enlargement of the numerical aperture

Numerical aperture in the microscope: in air and for a medium with

In air (for example with a telescope) with the numerical aperture is always smaller than one. However, it can assume values ​​greater than one if the space between the sample to be microscoped and the microscope lens is filled with an immersion liquid whose refractive index is greater than one. Often water ( ), glycerine ( ) or oil ( ) is used. With microscopes, the numerical aperture usually increases with the magnification of the objective, the high-magnification objectives (90x, 100x, and with high-resolution objectives also 40x and 60x) accordingly need immersion liquid between the objective and the object (cover glass).

With optical waveguides , too , the numerical aperture is described by the sine of the acceptance angle (sometimes also the collimation / divergence angle) of the fiber and corresponds to the opening of the conical light bundle emerging from the end face of the fiber.

The resolution can be increased beyond the diffraction limit by utilizing non-linear reactions of the molecules, for example with the analysis methods STORM , dSTORM , STED or (f) PALM .