Calculated diffraction image in the far field behind a circular aperture. In the representation, the intensity is implemented logarithmically on the brightness scale . This comes close to the real impression by the eye.

Diffraction disks (also: diffraction rings ) are created when a light beam is diffracted by a diaphragm . If the diaphragm is circular, a central maximum is observed, surrounded by rings of decreasing light radiation intensity . In astronomy Airy disk are also called Airy disk (Engl. Airy disc ) called, named after the English astronomer George Biddell Airy . Non-circular diaphragms also produce diffraction structures that can clearly differ from a diffraction disk ( spikes ). The diffraction of light is mathematically described by the diffraction integral . 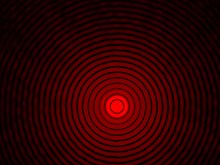 Even an instrument that is perfect according to the laws of geometrical optics , without imaging errors , can not image a point of light given as an object exactly on a point; instead, the diffraction of the light at the aperture diaphragm creates a blurred spot in the image plane. The shape of the spot depends reciprocally on the shape of the aperture, in particular its size is inversely proportional to the size of the aperture. In the case of a circular aperture, given for example by the round frame of a lens, the spot is also rotationally symmetrical, with a central maximum and weak, concentric rings. Since the size of this pattern also depends on the wavelength, the diffraction rings can hardly be seen in white light. The central diffraction spot is also called the Airy disk after the English astronomer George Biddell Airy .

Diffraction at a circular aperture

Intensity behind a circular pinhole

where is defined as follows:

is the bondage function of the first kind .

The light intensity ~ follows the function

The intensity goes to zero at regular intervals and contains secondary maxima that become weaker towards the outside. The size of the central diffraction disk results from the first zero of the function , which is at . 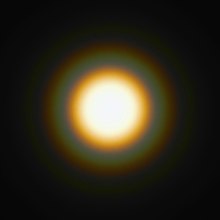 Diffraction pattern of a circular pinhole irradiated with white sunlight - the shorter the wavelength , the less the corresponding color components are diffracted.

The angle of the edge of the central diffraction disk results from the angle radius to:

If a lens images from infinity with the focal length , the central diffraction disk has the diameter

In practice, one often uses the following approximation formulas (for green light with a wavelength of 550 nm):

Diameter of the diffraction disk

Example: an aperture of results in a diffraction disk of diameter.

Example: an objective aperture of diameter allows an angular resolution of .

If the diaphragm deviates from the circular shape, the shape of the central maximum and the higher diffraction orders change. The picture on the left shows an example of a rectangular aperture. Their orientation is indicated in the upper left corner of the picture. The ratio of height and width is also reflected in the central spot, but with reciprocal ratios, since the aperture and diffraction image are linked via the Fourier transformation . The secondary maxima are most pronounced in the main directions.

The picture on the right shows diffraction disks (right) of different diaphragms (left). The ring-shaped brightness modulation that one expects from a circular aperture is superimposed by radial stars, the so-called spikes . They stand out particularly clearly with the triangular aperture.

If a dark diaphragm is used, a typical diffraction pattern with a Poisson spot in the middle is also produced in the shadow of the corresponding circular disk .

Unless otherwise stated, all considerations are made at a mean wavelength in the visible range of 555 nm (green).