In optics , diaphragms are devices that limit the cross-section of beams . Depending on the effect and design, panels are called differently.

Designation according to the effect

Depending on the effect, three pure forms of panels can be distinguished from one another:

The aperture diaphragm is located on the image side between the tips of the dark gray components.

A pure aperture diaphragm has a uniform effect on the brightness of the image by limiting the opening width (aperture) of the optical device. It does not affect the size of the image section. To do this, it must be designed in such a way that all radiation beams contain the same radiation flux in relation to the radiation power of the object .

In devices with only one imaging component (for example a lens or a main mirror ), the aperture stop is usually arranged in the vicinity of this component or implemented by the lens or mirror edge. In the eye, the iris acts as an aperture stop. In the case of more complex devices, such as camera lenses , the aperture diaphragm can also be arranged on the object side, on the image side or between the imaging elements.

The images of the aperture diaphragm are called the entrance pupil on the object side and the exit pupil on the image side .

In practice, almost any delimitation of a beam by an aperture diaphragm results in a beam that passes the diaphragm cross-section at a different angle being clipped in a different ratio. This usually leads to a darkening of the image near the edge, which goes beyond the Cos 4 law . This phenomenon is called vignetting .

A field diaphragm only limits the image section without affecting the brightness of the image.

The images of the field diaphragm are called the entry hatch (object side) and exit hatch (image side).

A pure lens hood is arranged outside the beam path and does not affect the brightness of the image or the size of the image section.

Designation according to the design

The diaphragm is inserted / pushed into the lens through a slot. Different hole shapes are possible. 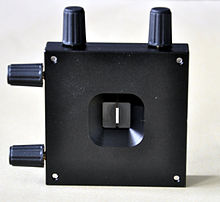 Slit diaphragm adjustable in two directions : mostly used as a field diaphragm (for example on a prism spectrometer )

Influence of aperture on exposure and depth of field

Photographic diaphragms are often designed as iris diaphragms ; they are adjustable aperture diaphragms for controlling the brightness and, indirectly, the depth of field of the image. A lens mount acts as a fixed aperture stop. However, since it often reflects scattered light, a fixed aperture ring is attached in front of or after it.

When enlarging negatives (working out photographs on film or plate), a right-angled snap frame made of four thin metal strips, two of which are usually adjustable, is placed over the photo paper to be exposed. This means that the paper is pressed largely flat onto the cassette (good for image sharpness and freedom from distortion), the image section is sharply defined and an unexposed, white edge is created on the paper. Contact copies of the larger glass negatives are often made in a wooden box with a fixed frame. Even the camera housing, with its film guide, mostly made of cast aluminum or plastic, creates a rectangular border of the exposed area on the film. Special features of the contour - dimensions, corner rounding, shadow of a thread of dust - provide researchers with information on the type of camera used or even the camera copy. With some films, the manufacturer not only imprints negative numbers but also separators (or frames) between the frames. Slide mounts form an optical frame around the slide film, which is typically somewhat smaller than the standard format (e.g. small picture 24 × 36 mm).

Panels with a strikingly shaped contour suggest a special perspective of the viewer in still or moving images. The classic keyhole perspective with a diaphragm made of a circle and connected trapezoid, which widens slightly towards the bottom, for an unobserved view through a door. Four squares at a short distance suggest a view through a barred prison window, many squares through a ventilation or duct inlet grille.

Small, often yellow-tinted hatches on the back of a roll film camera offer a view of the picture numbers printed on the paper strip and information on film transport and prevent light from falling on the film side. Some 35mm cameras allow this type of insight into the labeling of the film cartridge in order to be able to read off the film type.

Slit diaphragms usually restrict the beam path as field diaphragms only in one direction. In spectrometers and related optical devices, they are called optical slits , and they are usually adjustable both in terms of their width (order of magnitude 1 mm, when it comes to the visible spectral range ) and their height (order of magnitude 20 mm). They serve on the input side as secondary light sources of well-defined and easily usable form, on the output side, for example, of monochromators as selection means for certain wavelengths (ranges) and in turn as secondary light sources. The width of the gap is generally chosen so large that diffraction effects remain negligible.

In ophthalmology , a non-adjustable pinhole diaphragm (so-called stenopean gap ) is used as an aperture diaphragm for the differential diagnostic assessment of a reduction in visual acuity . The ENT doctor can see through the diaphragm of the inclined lighting mirror in the throat, nose or ear.