In photography, exposure is the term given to the effect of the different light distribution of a subject on the photographic film or the image sensor in order to obtain an image. It represents the amount of light contributing to the exposure and is therefore influenced by the lighting and reflection of the subject, the opening width of the lens and the shutter speed of the camera . The exposure is balanced, when lights and shadows in the image or drawing throttled and the light sensitivity can be matched of the film or the image sensor. With constant illuminance over time: in the photographic image, the exposure is as follows:

The exposure index is inversely proportional to the exposure: 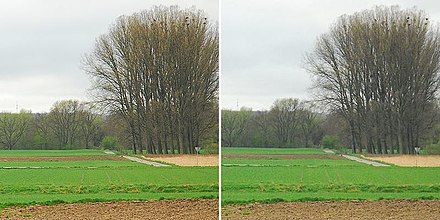 Contrast reproduction depending on the sensitivity

The light sensitivity of films and image sensors, as well as the exposure index of a photographic image, are now often specified according to the preferred values ​​of the technical standard ISO 5800 . The series of common values ​​is:

The ascending sequence of numbers not only means mathematically a doubling of the previous value, but a film with the next higher ISO specification is also twice as sensitive to light as the previous one, and half as light-sensitive in reverse order.

The choice of the exposure index depends first of all on the contrast of the subject . If the difference between light (not white) and shadow (not black) in the motif is very large, i.e. if it has a large number of finely differentiated intermediate tones, a high exposure index is chosen because it has a flatter gradation and thus finer details are reproduced in the Location is. Accordingly, if the subject contrast is low, a low exposure index is chosen because the gradation is steeper and includes less differentiated intermediate tones.

With increasing light sensitivity, however, the graininess of films becomes more visible, and with increasing exposure index the image noise increases with digital cameras . For this reason, values ​​should not be too high for a photographic recording. A low exposure index is recommended if, for example, documents are to be photographed or if, from a design point of view, only a few details should be reproduced with high contrast or if the recording light is strong. A high exposure value is useful when the shooting light is weak.

The exposure and exposure index do not depend on the sensitivity of the recording medium, but are determined solely by the amount of light absorbed, which can be influenced by the lighting of the subject as well as the set values ​​for aperture and exposure time.

Influence of aperture on exposure and depth of field

Aperture is an iris diaphragm, usually made up of thin individual lamellas, in the lenses , the diameter of which can be increased or decreased by turning a ring on the outside of the lenses or indirectly via a motor by setting the camera. Then the aperture ( number ) also means the ratio of aperture to focal length of an optical system. For example, a telephoto lens with a 50 mm free aperture (D) and a focal length of 200 mm (f) has the aperture D: f = 50: 200 = 1: 4, also written as f / 4. In contrast to other optical devices, the aperture itself is not specified for photographic lenses because it is of no further importance for photographic practice. Only focal length and aperture are mentioned, i.e.: 200 mm - f / 4, whereby the specified aperture (here 4) denotes the largest adjustable of the lens and thus its light intensity . Usual f-numbers are included in the f- stop series with the following preferred values:

Small f-numbers - i.e. large openings - can only be achieved with fixed focal lengths. Intermediate levels are possible; many zoom lenses have an initial aperture of f / 3.5, which corresponds to a level between 2.8 and 4.

Since the aperture is a reciprocal value, a large, wide-open aperture means a small f-number and a small, tightly closed aperture means a large f-number. In the order given, the light intensity of the lens and thus the exposure acting on the recording medium is quartered from step to step and quadrupled in reverse order. The difference in exposure that comes about by adjusting one aperture is called the aperture value, also known as the light value (EV). Thus, an aperture value corresponds to a level of light sensitivity. For this reason, an image that was exposed with ISO 400 and aperture 16, for example, can also be made with ISO 200 and aperture 11 with the same exposure result with the same exposure time.

The aperture is not only used for exposure control, it also determines the depth of field in the image. If the object to be photographed is to stand out against a blurred background, a large aperture is chosen. On the other hand, if you want to be equally sharp from the foreground to the background, a small aperture is used.

The longer the exposure, the clearer the traces of light from the car headlights become.

With an exposure of 15 seconds, the spray on the cliffs appears like a fog.

Exposure time is the duration for which the camera's shutter opens and the recording medium is exposed to the image projected through the lens. Usual exposure times are:

As with the aperture, the exposure acting on the recording medium is halved from step to step and doubled in the reverse order, so that the difference between two values ​​in the time series is also referred to as the aperture value or light value.

Because the exposure to light is halved in ascending order and doubled in descending order in both the aperture and time series, the values ​​for aperture and time required for correct exposure can be shifted against each other. The same exposure result is obtained if, instead of using f-stops 8 and 1/250 s, exposing with a wider f-stop 5.6 but shorter exposure time 1/500 s. Better cameras offer this shifting of the time / aperture pair as "Program Shift" or with similar names.

With exposure times shorter than about 1/1000 s and with longer exposure times over one second, however, this rule no longer applies without restrictions for recordings on photographic film, because in both cases more light than the rule is required for a balanced exposure. In the short term, one speaks of the short term effect , in the long term, according to its discoverer, of the Schwarzschild effect .

The correct aperture and time are determined with exposure meters .

Reflection of the light in 18% steps

All photographic recording media and measuring devices are calibrated to a so-called medium gray , which is possible because the brightness distribution of all colors can be reduced to the various tones of gray. This is based on the average light reflection indoors, which corresponds to the reflection of 18% of the incident light. The difference between this gray and ninety percent white, which just barely reproduces a bit of drawing, is two f-stops.

In the opposite direction, when measuring from the camera to the subject, it is an object measurement. The light reflected from the subject is measured. This type of light measurement can be found in all light meters built into the camera, but it is also an option for hand-held light meters, in which the cap is then pushed to the side. 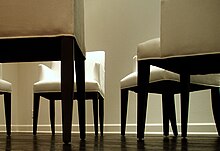 Targeted overexposure of an image part for aesthetic reasons

The object measurement is less reliable because it is not the uniformly incident light that is measured, but the reflected light, which can be reproduced very differently by the individual parts of the subject. The exposure meters try to compensate for this by taking the middle gray as a basis. However, if a subject is not average, but predominantly light or predominantly dark, the exposure meters, based on their calibration, assume the predominant part as medium gray and thus shift the grayscale of the subject in one direction or the other so that light subjects are underexposed and dark subjects are overexposed become. With snow, the beach, white house fronts, in deep forest and in similar situations, there is therefore the risk of incorrect exposure.

Possible errors in exposure measurement can be avoided in various ways. A series of exposures is simple with at least three exposures that differ by half or a third of an aperture value. It is also easy to measure a light or dark subject not directly, but to the side of the actual subject, where there is medium gray, and to pan the camera onto the subject using these values. It is reliable and easy to combine the two methods mentioned above. Measuring with a gray card is reliable but cumbersome .

Calibration of the measurement

The relationship between the light value , the f-number and the exposure time for the reference value for the exposure index of is as follows:

During a reflection measurement (object measurement), an exposure meter calculates the light value relevant for the camera setting from the measured luminance of an object using the following formula:

When measuring the incident light (light measurement), the light value is derived from the measured illuminance (measurement unit lux) using the following formula:

In practice, when measuring light, it is advisable to compare the exposure index of a digital camera using a reference measurement (gray card) with the external exposure meter, as the ISO values ​​for digital sensors specified by different manufacturers can vary considerably.

In the case of digital optical devices, the exposure measurement can also be carried out by the image sensor itself with which the image is to be recorded. In the live view mode, the user can even be shown on a screen or in an electronic viewfinder before the image is taken if there is overexposure, in that the overexposed pixels are identified by a conspicuous color or a zebra pattern:

As a makeshift, the exposure can also be made without measurement based on empirical values, as was the case with the old cameras before the light meters were introduced. In the time from two hours after sunrise to two hours before sunset, the following applies to ISO 100 and an exposure time of 1/250 seconds:

In the summer months it is necessary to fade down by half an aperture value in addition to the aforementioned information, and in the winter months to fade in accordingly. In extreme lighting conditions, a correction by an aperture value may also be necessary.