In photography, the motif is the essential content component of an image. The emphasis is mostly on a centrally represented object (person, building, part of a landscape or situation), but it can also - as sometimes in painting - be on an object placed near the edge of the picture. More rarely, but graphically often more interesting, geometric elements come into question as the main motif, e.g. B. screen diagonals , brightness or color contrasts, lighting or unusual line structures such as the course of building edges or bodies of water .

In artistic photography, the motivation of the photographer or that of the people portrayed is often the actual subject, e.g. B. in advertising . The choice of motif is usually particularly appealing to the viewer if it concentrates on a central topic and avoids strongly competing design elements. This is particularly evident in successful black-and-white photography, while beginners in digital or color photography often succumb to the temptation of the "too colorful". 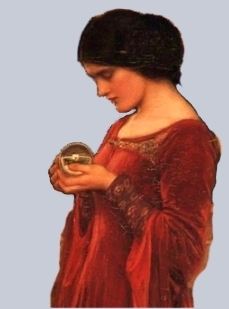 The image motif and the way it is presented are ideally those elements that spontaneously address the viewer . With a few exceptions, every good shot has a main subject . What is perceived as such can of course depend on the viewer and his current situation. The adjacent picture shows a “young woman”, but a seamstress could name the motif “dress” or “color”, a dealer “gift” or “can”, whereas pregnant women or orthopedic surgeons see the subject “posture” represented.

Some portraits have no clearly visible motive. What in photography is mostly a product of chance, lack of experience, or too quickly pressing the shutter release button can be entirely intentional in art . Suitable examples of this can be found among others. a. in impressionism and abstract art . For the viewer, the question of interpretation then comes to the fore.

The choice of motive depends largely on the motives of the person (s) involved and can have a wide variety of intensity. Important motivations include

With a snapshot or most vacation photos , joy or memory value dominate; the choice of motif is shaped by the current mood. Later on, such photos are often found to be meaningless. Today's digital photography often leads to a large number of pictures with little motif because they can be deleted anyway .

Better photos usually require a targeted choice of motif, but also other design elements. These include image detail , lines and perspective , incidence of light, time of year and time of day , depth of field adapted to the subject , appealing contrast (in addition to brightness and possibly color also thematic direction), suggestion of movements, suitable or unusual lighting, reflections, possible filters, etc.

A general motif is useful for creating sequences of images , for example “City Life”, “Landscapes”, “Professions”, “Faces”, “Children”, “Hobby”, “Light Effects”, “Clouds” or “Rainy Day”. In this context, the classic groups of motifs known from painting should also be mentioned, such as portraits , nudes and group pictures , religious art , forces of nature, water and other landscape motifs , architecture , travel , exotic objects and still life .

(Will be further processed soon, e.g. historical, cross-references to graphics, other specialist literature, web links and exemplary images. The stylistic devices of famous photographers and influences from / on the visual arts or advertising material would also be desirable).

History on the subject of image motifs

The photographic style and theme story begins shortly after the invention of photography in the early 19th century. It is related to that of the graphic , but an extensive topic of its own. The preceding developments can naturally only be traced in painting (and partly in graphic art).

The oldest surviving works of art in human history, the cave paintings , suggest personal motifs, but are primarily religious or cult motivated. In the following millennia, the development of the representational motifs (in the sense of this article) largely depended on the culture . The visual arts were predominantly commissioned art for religious institutions (temples and other places of worship), while graphics and drawing developed rather independently. They also served to represent what z. B. in the development of the portrait for the social upper class ( princely courts , nobility ) and finally the bourgeoisie shows.

In most cultures and periods, the artistic imagery is more or less subject to strict conventions that are / were shaped by the zeitgeist of the ruling class of society. In the European Middle Ages and the high Islamic cultures, the relatively uniform worldview is reflected e.g. B. reflected in the themes of the miniatures , in iconography and images of saints . Image cycles like sgraffiti and dance of death also had quite general schemes. On the other hand, the art of the Romanesque and Gothic gave rise to new religious and social motifs, which today often seem strange. Typical are depictions of poverty , handicrafts, biblical stories , death and the soul , the forces of the mind and nature . The development of topics with personal expression such as the joy of celebrations, suffering , everyday work, encounters or scenes of the Virgin Mary only began more clearly in the 16th century, but already shows parallels to the first photo motifs of early photography in the 19th century.

The bond to favorite motifs and rules that had prevailed up to around 1800 only loosened with the advent of “ free artistry ”, which can also be seen in poetry and the music of Viennese classicism at the same time . The increasing freedom, especially at the turn of the century , also brought excesses and conflicts with it. Typical examples of this can be found in nude photography and the works of Egon Schiele and extend to the pornography of our day. For drawn social criticism or caricatures , photographic technology was able to introduce new methods from solarization and contrast enhancement to digital image processing and exemption.

From a historical perspective, influences of design and technical elements on the photographic image motifs can also be determined. These include u. a. the discovery of perspective , different painting styles and materials. The emergence of an art that as an end in itself no longer served any special use (L'art pour l'art), in turn, changed the relationship between the photographer or artist and the work and society. Starting from the European cultural area, photography, graphics and painting often became the expression and the only “permissible” place of utopias or took on tasks of social policy . Today, higher priced photographic art is part of the global art market .