Close-up is a forwarding to this article. See also: close-ups .

In addition to film art and photography , setting sizes are also used in comic art. They are an important means of pictorial / cinematic storytelling and can set psychological accents. Usually the setting sizes are defined in the storyboard .

There are basically many different names and schemes for defining setting sizes. The boundaries between the individual settings are not strict, and there are regional differences (USA, Europe), as well as the personal handwriting of a director , cameraman or filmmaker . The more image content can be seen around the focused main content, the more total the setting. The settings are often divided into two main groups: the total adjustments ( Engl. Long shots ) and the related settings (close-ups) . The most important are briefly introduced: Super shot , long shot , medium long shot , American setting, Medium , Near , wholesale , Detail , Italian setting.

Changing the setting size while the stationary camera is running is called zoom . A change can also be made by moving a camera , which is much more common in scenic productions than a zoom. Since the perspective does not change while zooming (the camera location remains the same), this method of changing the setting size is considered flat and lifeless. It also does not correspond to the everyday viewing experience of the audience, which instinctively connects a change in the image section with a movement of the viewer. A special form is the dolly zoom , a camera movement with simultaneous opposite zoom. The setting size remains the same with a properly executed dolly zoom, while the change in perspective gives a feeling of dizziness.

In the super total , also called expanse , panorama or wide-angle view , a landscape is the content of the picture. Humans appear vanishingly small in it. It is used, for example, for establishing shots to show what is happening embedded in its surroundings. As a psychological accent it can express feelings such as loneliness, isolation, foreignness and / or danger, but also freedom and infinity. This setting is also suitable for emphasizing the depth of the landscape when people enter it or vehicles drive into it.

The setting is used when a person or group completely, so in their environment totally is to see the scenery but not represents the main image content. The person appears larger than in the super total, but still relatively unimportant. The long shot is often used for establishing shots . In films that consist mainly or only of long shots, the actors seem aloof. Total shots are more common in documentaries than in feature films. They are there to give an overview of what is happening.

The figures are shown from head to toe. This setting can be used well for groups of people or for physical actions, for example in slapstick comedy . In the medium long shot, body language is often more important than dialogue .

The full shot is a special form of the half-long shot. It only shows the people and little or nothing of their surroundings.

The figures are shown from the head down to the waist; the widest part of the hip is used here as a guide to cut into the person; the immediate surroundings can be seen in the background. A special form is the American shot (AS), in which the actors are shown up to about the knee. This shot size was often used in westerns to show the cowboys with their guns. 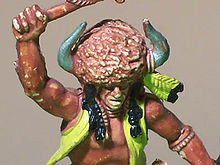 The figure is shown from head to waist. This setting corresponds to the natural visual situation and is therefore often used in dialogue scenes.

The half-close shot is also used in closed rooms and is referred to in German film production as half-close one , two or three , etc.

The figure is shown from the head to the middle of the torso. This setting is used, for example, in conversation scenes when facial expressions and gestures matter. In this shot, the viewer also sees where the character is looking and can draw conclusions about the progress of the action. In German film productions, the terms close to one or two are traditionally used.

It is also known as a talking head or talking head shot . It is used in news, sports and documentaries. The person sits about 3–4 meters in front of the camera and looks directly into the lens. In documentations, the person then speaks reflectively about the events shown. Only a camera and a few light sources are required for this. 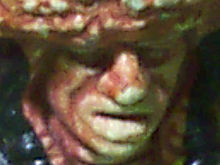 The figure's head and part of the shoulders are shown. Often parts of the filmed object (hats, etc.) are cut off. The facial expressions are clearly in the foreground here. The setting size can be used to show feelings as they arise, or actions that are only done with the hands. 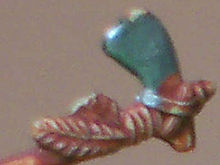 Only a section of the overall picture is shown, for example only the eyes or the mouth of a person or other important details of the scene, such as the words that are typed on a computer.

The viewer's attention is drawn to a small section of the image. The intense image effect conveys intimacy or creates a repulsive effect.

Special kind of detail shot in which only the eyes of the protagonist are shown. A well-known example can be seen in Sergio Leone's western C'era una volta il West ( Play Me a Song of Death ) in the scenes of the duel between Henry Fonda and Charles Bronson .

Meanings of the settings

Each type of setting is particularly suitable for specific purposes. Changing the settings is also an important source of information. Stylistic features and the handwriting of the director can be recognized from it. Different film traditions and cultures also traditionally use very different changes in the settings.

Action films or documentaries often have a high proportion of long shots because facial expressions and non-verbal forms of expression are less important for these films, rather entire processes are captured. The required acting skills are comparatively low for these types of film. Also quasi documentary films often contain many complete settings and betrayed hereby their origins from the documentary. Films that focus on character relationships and feelings contain many close shots.