from Wikipedia, the free encyclopedia
This is the spotted version , flagged on January 31, 2019 . There are 2 pending changes that have yet to be viewed.

This article or section needs to be revised: The text seems rather irrelevant in places and the selection of images in terms of number and selection is in need of improvement. You can also take part in the discussion . - XRay Disk. 12:33, Sep 11 . 2018 (CEST)
Please help to improve it and then remove this mark.

Long exposure of a train (25 seconds)

The sky appears to revolve around the North Star (30 minutes).

In photography, long exposure is an exposure time of several seconds. Long exposures are used with weak natural light sources or in the technical and artistic field to show movement sequences.

Thematically there is a connection to available light photography, which is not limited to long exposures. The use of the available light in connection with shorter exposure times is also possible with highly sensitive films or image sensors and bright lenses, since the use of the tripod is undesirable or impossible. In the night photography long exposures are used, however, the application is universal.

The English term bulb is used internationally , as in earlier times the remote release was operated with a bellows. Accordingly, the long exposure camera function is usually marked with a “B”, which in German is sometimes used as a substitute for the term arbitrary . Long exposures are not limited to bulb mode, however, as cameras usually allow up to 30 seconds in other modes as well.

Long exposures show a section of time that we cannot perceive with moving subjects. In contrast to photographs with short exposure times, they do not capture a brief moment, they depict the subject in a longer process. Movements are blurred, they dissolve in time. Depending on the speed of movement, this effect occurs with comparatively short exposure times of less than one second.

The approx. Two-year exposure times from Potsdamer Platz by Michael Wesely show a horizon through the new buildings that could be seen before the development of the square. The paths of the sun also come to the fore as bright stripes.

The long exposure time results in a large amount of motion blur with moving objects , which can be used as a creative tool (see light painting ). Moving objects or people become blurred and can even "disappear" completely. B. architectural recordings can be used. In the dark, bright objects (e.g. vehicle headlights) leave streaks of light. Long-term recordings of a night sky (without influencing interfering light sources such as street lights) make the stars look like lines or segments of a circle due to the rotation of the earth.

The movement effect is also used for motifs with flowing water or cloud movement, for example, in order to make them soft and blurred. In such situations, a neutral density filter is typically used to enable sufficiently long exposure times.

In addition to movement effects, it also includes exposures, for example in architectural photography, since the priority for immobile objects is low noise (low ISO number) and sufficient sharpness (suitable aperture), but not the exposure time. 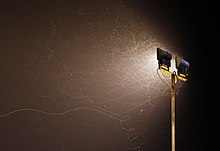 The long-term exposures are often in the range from five seconds to several minutes. The exposure time is hardly a limit up, so has Michael Wesely extremely long exposure times carried out by up to 26 months.

With some motifs and motif effects, such as light pendulum shots or experiments as part of a lomography , various means can be dispensed with. Correct exposure is decisive for the choice of medium.

If only a moving object is to be reproduced, but not the background shaky and blurred, the camera must protect against shaking e.g. B. be secured by a tripod . When using a tripod, it is often recommended to turn off the image stabilization systems. Otherwise you can lead to blurred images again through "overreactions".

Long exposure times can be set directly for cameras with manual exposure setting or time preselection. On most cameras, the function for individual long-term exposure is marked with a B , which in Germany occasionally stands for any , in the USA for bulb (bellows / ball). This is due to the fact that older cameras were triggered remotely with such a bellows device. With most electronically controlled cameras, however, the exposure time is limited by other factors, such as keeping the shutter open requires electricity. Cameras with a mechanical shutter allow (almost) unlimited exposure times; this also applies to cameras without a shutter, such as pinhole cameras . For the vibration-free operation of the closure is a cable release as available - - in modern cameras, a release cable or wireless remote release and mirror lock helpful, alternatively, the delay can self-timer can be used.

In the early days of photography, long exposure was not just a design tool, but a necessity. The reasons for this were the low sensitivity of the photo material and the low light intensity of the lenses used . Daytime shots of busy streets therefore often show no or only blurred people, for portraits aids such as neck supports were necessary.

It should be noted that, due to the Schwarzschild effect, longer exposure times are required for chemical film material than indicated by the exposure meter . This deviation depends on the film material.

This correction is not required with digital cameras, but a higher ISO number results in a clearer noise in the image sensor , which can be partially compensated for by means of "noise reduction processes" with loss of details. In addition, permanently glowing hot pixels can occur more frequently. Some digital cameras allow a picture with the shutter closed as a "noise pattern" after the long exposure and use this by subtracting it from the actual picture in order to reduce its errors such as noise or interfering pixels. The disadvantage of this method is that the dark exposure is recorded for as long as the actual image and the camera is not ready for use during this time.

Another method, which cannot be used if there are movement patterns in the image, is the multiple exposure method. The image is recorded several times with identical settings. Disturbances caused by random image noise can then be reduced by offsetting the images (averaging the brightness values ​​of the pixels using an aithmetic mean).