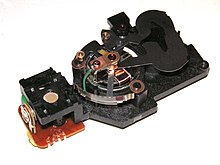 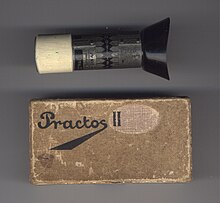 "Practos II", optical light meter; the exposure meter works purely optically, the exposure is determined on an optical scale, whereby the exposure value corresponds to the displayed value, which is just visible.

In photography or film photography, a light meter is a photometer that is either a stand-alone device ( handheld light meter ) or part of a camera (integrated or internal light meter ). With the exposure meter, the brightness of the subject is measured and from this the data for the exposure such as the f-number and exposure time are calculated or determined. It gives the measure of the incident luminous flux Φ per unit area in the unit lux (previously in phot ).

The first methods of determining the correct exposure of photographic material by measurement came from the 19th century and used photochemical processes in which the blackening of a material treated with a light-sensitive substance was observed with the eye and compared with a comparison scale, for example.

Early photographers are said to have used a cat's pupil to measure exposure.

As optical exposure meters, the step photometers such as the “Lucimeter” also came onto the market as early as the 19th century. In the case of these, the number of papers in which no light could penetrate the device was searched for by means of stacked papers or small glass plates; From the number, conclusions could then be drawn about the amount of incident light and thus the necessary exposure time.

Older light meters worked with a selenium cell , a photo element or a photo diode based on polycrystalline selenium . The selenium cell fed a moving-coil measuring mechanism directly ; therefore, such light meters do not require a battery. Since the photocurrent of the selenium cell, like other photodiodes, is linear to the illuminance , these light meters often had a range switch (electrical, gray filter or pinhole) to cover all brightnesses, or a setting wheel for calculating film sensitivity, exposure time value and aperture. The first electric light meter equipped with a selenium cell was brought onto the market by the Weston company in the USA in 1932; a first German device was also the result of a collaboration between Dr. Bruno Lange with the P. Gossen company in Erlangen and was available from spring 1933.

Newer devices and light meters in cameras often work with a cadmium sulfide (CdS) photo resistor; they therefore need a battery as an energy source, often in the form of a button cell . The resistance curve of photo resistors is strongly non-linear, so that often no range switching is necessary.

Both selenium cells and CdS photo resistors have almost the same spectral sensitivity as the eye and therefore do not need a color filter. A daylight filter , on the other hand, must be placed in front of a silicon photodiode in order to adapt it to the spectral sensitivity or to compensate for its higher sensitivity in the red and infrared range.

Flash exposure meters do not measure the illuminance, but the amount of light that hits them by taking the integral of the illuminance during the time of the flash. You therefore need synchronization with the flash unit: either they synchronize themselves when the flash starts, or they have a synchro connection to trigger the flash via a cable.

Single lens reflex cameras with internal measurement have a photo receiver in the beam path behind the screen. You can therefore measure the lighting independently of the lens. They have a center display with light-emitting diodes or a pointer overlaid in the viewfinder image, corrected for the exposure time and the film speed.

Automatic cameras can also often control the flash energy during the exposure based on the amount of light reflected from the object. They stop the flash when enough light has bounced back.

CCD and CMOS cameras do not need a separate exposure meter, as they can determine the illuminance using their image sensors. 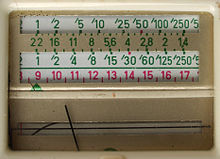 Scale of an older handheld light meter. In order to determine the correct time / aperture combination, a wheel must be turned until the pointer, the horizontal black line and the curve on a rotating cylinder intersect at one point. This is not yet the case in the illustration, the curve is still to the left of the pointer.

A light meter is a part of almost all cameras today . It is essentially responsible for the correct exposure of a picture, since it calculates the correct relationship between exposure time and aperture (depending on the sensitivity of the film). The calculated exposure time and / or aperture are then set either by the camera independently (automatic) or manually by the photographer (by means of tracking measurement or via read EV / LW / aperture / time values).

Viewfinder cameras often have an exposure meter that is installed next to the lens or in the camera housing. With close-ups, this arrangement can lead to incorrect measurements due to the parallax. Individual camera designs also use the light reflected from the film during exposure for exposure control.

As a separate accessory, the handheld exposure meter is mainly used in photo studios or for professional work. The integrated light meter is often overwhelmed here, as several artificial light sources are usually used.

When using daughter flash units, the integrated exposure meter of a camera with a built-in flash cannot control the exact amount of light, as the light from the other flash sources only adds up when the flash is triggered, which leads to overexposure. In these situations, only a separate light meter can measure the exact amount of light. The data obtained from this can then be set on the camera so that correct exposure is guaranteed.

The measurement takes place either from the camera position or directly on the object or a gray card . Special spot light meters are used to measure individual image sections.

With the help of a special filter (cap), instead of the reflected light, with many handheld exposure meters, the light that is supplied by the light source and falls on the object can be measured. The filter is either pushed in front of the sensor or folded.