Blue hour at the Dreiländerbrücke . You can see the redness caused by the setting sun.

The Brandenburg Gate in the blue hour

The Hildesheim Cathedral in the blue hour

The Palace of Westminster at the blue hour 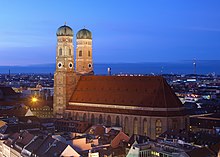 The Munich Frauenkirche in the blue hour

The term blue hour refers to the special coloring of the sky during the time of twilight after sunset and before the onset of nighttime darkness , while the sun is about 4 to 8 degrees below the horizon. The term was particularly coined by writers and poets who often associate it with melancholy feelings. The same coloration can also be seen at dawn, although the term is used less often in this context. The blue of the sky has a different spectral composition because it is due to a different physical cause than during the day. During the blue hour, this deep blue sky has about the same brightness as the artificial light from building and street lighting. Not least because of this, the blue hour plays a special role in photography .

Physical explanation of the coloring

The sky blue during the day is caused by Rayleigh scattering , due to which more light of shorter wavelength - i.e. blue light - is scattered. If, however, the sunlight falls more and more obliquely in the course of twilight and takes a longer path through the earth's atmosphere, more and more light is already scattered out before it can reach the sky above the place of twilight. Since this applies in particular to the blue light, it would mean that the sky at the zenith after sunset would be more yellowish or greenish. With the inclined incidence of light, the light also has a longer path through the ozone layer at an altitude of 15 to 30 kilometers, which is why the Chappuis absorption comes into play, which is not noticeable during the day because it is significantly weaker than the Rayleigh scattering .

As early as 1880, the French chemist James Chappuis had recognized that ozone colors visible light blue because it absorbs light in the yellow, orange and red spectrum, which means that the blue light is left over, so to speak. However, it was considered that the blue of the sky was already perfectly explained by the Rayleigh scattering known at the time, so that no importance was attached to this effect in this regard. It was not until 1952 that the American geophysicist Edward Hulburt (1890–1982) recognized this connection. He came across it when he measured the intensity and color of the light during twilight and compared it with the theoretically predicted values. Due to the magnitude of the deviations, measurement errors could be excluded. It was not until Hulburt, who was aware of the absorption effect of ozone, that the Chappuis absorption was included in his calculations, that theory and experimental data could be reconciled.

As the path through the earth's atmosphere becomes longer and longer at dusk, the importance of Rayleigh scattering for the coloring of the sky at the zenith decreases, while the importance of Chappuis absorption increases. At sunset, only one third of the coloration is due to Rayleigh scattering and two thirds to Chappuis absorption; in the later course of twilight, the latter becomes the only significant effect.

Hulburt himself was amazed at the discovery of this seemingly completely coincidental harmonic interplay of two very different physical effects and expressed this in a letter of thanks for an award he received for his research.

The unsuspecting observer lying on his back and looking upward at the clear sky during sunset sees only that the overhead sky which was blue before, remains the same luminous blue color during sunset and throughout the darkening period of twilight. He is not aware that in order to produce this apparently simple and satisfactory result nature has dipped quite freely into her best bag of optical tricks.

“The unsuspecting observer, lying on his back at the clear sky during sunset, sees only that the sky above him, which was blue before sunset, maintains the same brilliant blue as the sun sets and then during dusk getting darker and darker. He is not aware that nature, in order to produce this apparently so obvious and obvious result, has quite generously reached deep into its optical bag of tricks. "

The duration in Central Europe is between 30 ( equinox ) and 50 minutes ( solstice ). The length of twilight in relation to the latitude plays an important role. The length of the apparition is 20 minutes in the tropics and up to five hours in the white nights . At the poles, the blue hour lasts (theoretically) two weeks.

The blue hour in photography

In photography , the blue hour is used for available-light shots and night photography . Compared to recordings in complete darkness, the surroundings are still slightly brighter and more visible at this time. In the image obtained, the contrasts between light and dark are softened and the images have a special mood. The lighting inside buildings comes in the same photographic contrast range of the non-artificially illuminated facade and surroundings and the color contrast to street lighting and building lighting provide photographic incentives. The different color temperatures (blue of the sky, orange of the light bulbs, turquoise of the fluorescent tubes) make such photos unusually colorful. The color temperature of the sky is between 9000 K and 12000 K. It corresponds roughly to that of the daytime sky seen from the shade, so the different spectral composition due to the Chappuis absorption is not significantly noticeable in the color temperature.

The blue hour in literature

The blue hour in music