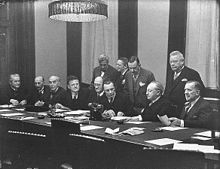 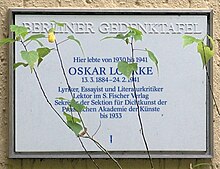 Berlin memorial plaque on the house at Kreuzritterstrasse 8, in Berlin-Frohnau 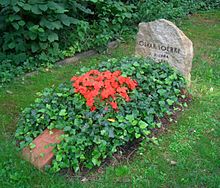 Honorary grave of the city of Berlin in the Frohnau cemetery , Hainbuchenstrasse 64–75

Oskar Loerke, born in Junge (West Prussia) in 1884, studied history, German, philosophy and music in Berlin from 1903. In 1906 he broke off his studies, in the same year he met his future partner Clara Westphal . Between 1908 and 1912 he made long journeys in Germany and France. He documented his experiences in detailed travel diaries. In 1909 he first met Moritz Heimann , editor at S. Fischer Verlag .

As a writer, he first emerged with the story Vineta (1907). In 1911 his first volume of poetry was published. Loerke paved the way for natural poetry with his strict form, intense imagery, musicality and mythical features . At the age of 29 he received the Kleist Prize in 1913 (together with Hermann Essig ). The prize money enabled him to travel to Italy and Algiers.

From 1910 to 1917 Loerke was a member of the Berlin “Thursday Society”, a meeting point of the artistically and intellectually progressive Berlin, where literature, music and painting were discussed.

From 1917 Loerke worked as an editor at " S. Fischer Verlag " and got to know the publishers' authors, especially Thomas Mann . After the First World War he became an enthusiastic supporter of Max Herrmann-Neiße and Walter Rheiner .

Between 1920 and 1928 numerous articles and reviews penned by Loerkes were published in the Berlin Börsen-Courier . Between 1929 and 1932 he also contributed to the literary magazine Die Kolonne , which was open to nature poetry.

In 1926 he became a member of the Prussian Academy of the Arts . Two years later he was given a paid position there as secretary of the “Poetry Section”.

In 1926 he gave a series of lectures on problems of form in poetry . In the years from 1931 to 1937 he organized reading evenings in the Berlin publishing house Rabenpresse .

His love for music was reflected in two writings on Johann Sebastian Bach and in 1938 on Anton Bruckner .

Loerke retired to his house in Berlin-Frohnau and remained chief editor of the “S. Fischer Verlag ”, which he tried to defend against ever new repression and censorship measures. His volumes of poetry, Der Silberdistelwald (1934), Der Wald der Welt (1936) and Der Steinpfad (1938), which were published in the 1930s, established his reputation as a poet of " inner emigration " and representative of the so-called "natural magic school".

A few months before his death, he wrote an obituary for the Silesian poet and National Socialist Hermann Stehr , who died in the autumn of 1940 and with whom he had once been friends, which was published in the magazine Das Reich , which was controlled by Joseph Goebbels , which later led to irritations led because Loerke was mistakenly believed to be one of the authors of this propaganda magazine.

Oskar Loerke died in Berlin-Frohnau in 1941 . His remains are buried in the Frohnau cemetery. The grave is dedicated to the city of Berlin as an honor grave .

Loerke viewed his books of poetry, published by S. Fischer Verlag during his lifetime, as a seven-fold unit, planned as a "book of seven". The individual volumes published between 1911 and 1936 are in turn divided into cycles.

Selected poems or poems from the estate

Complete edition of the poems

"Loerke is one of the most important German-speaking poets of the epoch that followed Rilke, Hofmannsthal and George between 1920 and 1945."