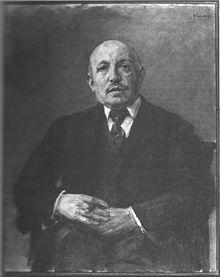 Memorial plaque on the house at Erdener Strasse 8, in Berlin-Grunewald

Samuel Fischer (born December 24, 1859 in Liptó Szent Miklós / Hungary , today Liptovský Mikuláš / Slovakia , † October 15, 1934 in Berlin ) was one of the most important publishers in Germany . Like his colleague and competitor Leopold Ullstein, he was a Jew. In 1886 he founded the S. Fischer Verlag in Berlin, which is now based in Frankfurt am Main.

Samuel Fischer was the third of five children in a Jewish-Hungarian family. He was the son of the businessman Carl Fischer and his wife Minna, b. Ullmann. After his childhood and youth in Hungary, Fischer drove to Vienna almost penniless and alone to begin an apprenticeship as a bookseller there. He spent six years there, worked as a journalist and also acquired commercial knowledge in evening classes. In 1880 he moved to Berlin over and went as a bookseller assistant in the Central bookstore of Hugo Steinitz . In September 1883, Samuel Fischer became a partner in the Hugo Steinitz & Co. publishing bookstore on Friedrichstrasse . In 1886 he founded S. Fischer Verlag . In January 1887, Ibsen's play Rosmersholm was the first book to be delivered.

In the literary debate club Durch , Fischer had the opportunity to observe current literary trends. In this circle he could have looked for the leading figure of a future realistic literature in Germany. However, Fischer did not do that and instead initially published a foreign-language author such as Émile Zola, who was less famous than notorious at the time . He had works by Tolstoy (the drama The Power of Darkness, the social considerations money! ) And Dostoyevsky (the novels The Eternal Husband, The Gambler and The Idiot ) translated, whose authors, as Russians, were not protected by copyright due to the legal situation at the time . Fischer thus made a decisive contribution to establishing the status of this literature in the German-speaking area. From 1887 to 1889, Fischer also relied more and more on the theater. He actively supported the establishment of the Free Stage Association , which opened up new perspectives for the publishing house.

In Berlin in 1893 he married Hedwig Landshoff (1871–1952), daughter of a wealthy merchant family. In 1894 their son Gerhart was born, who died of typhus in 1913 shortly after his 19th birthday . Brigitte († 1991) followed in 1905 , who continued the publishing house with her husband Gottfried Bermann Fischer (1897–1995) after her father's death . The second (illegitimate) daughter Hildegard (1916–2005) emigrated with Brigitte during the war years to Sweden, then to the USA, where she worked as the private secretary of the conductor Fritz Busch .

In 1895 the Fischer signet, drawn by Otto Eckmann, was used with the net for the first time . It was supposed to convey Fischer's self-image as a publisher in a powerful way: not just to distribute literature recognized and recognized as high-ranking across the market, but to first “catch up” with it from the creative potential of peoples and generations. From 1898, all of Ibsen's works appeared in ten volumes. Fischer had already got to know the author personally in 1889 and published Ibsen's other works in the following years.

The authors of these first two decades also include, among many others, Gerhart Hauptmann , Arthur Schnitzler , Peter Altenberg , Herman Bang , Jakob Wassermann , Thomas Mann , Hugo von Hofmannsthal and Hermann Hesse . The publisher had high hopes for Thomas Mann. He was asked to send in additional manuscripts. His first works were combined in a volume of novels. The real success, however, came with the novel Buddenbrooks . Fischer initially had doubts about publishing this novel because it seemed too long to him. However, Thomas Mann must have appealed to Fischer's literary conscience so that he finally agreed to publish the novel in 1901. Fischer's fears initially seemed to be confirmed; However, when the second, one-volume edition appeared in 1903, the success was there.

A direct consequence of the beginning of the First World War was the breaking off of the publisher's international relations. Fischer was forced to cut production. Like most authors, he hoped for a German victory. Of a total of 176 titles published by Fischer between 1915 and 1918, almost a third were war literature . In the 1920s the question arose as to who should take over the legacy of the publishing director, who is soon to be seventy. The answer was found in Gottfried Bermann; he joined the publishing house on October 1, 1925 and in 1927 married the older daughter Brigitte. Thus the threatened sale of the publisher was averted. The successor's competence was steadily expanded, and in 1928 Fischer appointed Bermann as managing director.

After the seizure of power , the National Socialists confiscated unwanted printed matter and restricted the freedom of the press. The question of the future of the publishing house arose. At first this depended on the will of Samuel Fischer. Although he had completely handed over the practical management to Bermann Fischer , his approval was required in some areas of the business. Fischer was not convinced of the political endangerment of the publishing house and the seriousness of the anti-Semitic statements.

Samuel Fischer died on October 15, 1934 in Berlin and was buried in the Jewish cemetery in Berlin-Weißensee . After Samuel Fischer's death, the publishing house was divided in the course of Aryanization . Bermann Fischer left Germany with the rights and the already printed works of unwanted authors, the rest of the work continued in Berlin under the old name and new management. Bermann Fischer first emigrated to Vienna, then to Stockholm and finally to New York.

At Erdener Strasse 8 in the Berlin district of Grunewald , Fischer's home since 1905, there is a marble plaque with a relief portrait of the publisher.

At the house at Bülowstrasse 90 in the Berlin district of Schöneberg , the house of the S. Fischer publishing house , there is a Berlin memorial plaque .

He had acquired the property in 1904 from the banker Hermann Rosenberg, an uncle of Katia Mann . The architect of the villa was Hermann Muthesius .

Samuel Fischer's grave of honor is on the Jewish cemetery in Berlin-Weißensee in field J4.