Peter Altenberg (born March 9, 1859 in Vienna ; † January 8, 1919 there ; actually Richard Engländer ) was an Austrian writer . He chose his pseudonym after the nickname "Peter" of his childhood sweetheart Berta Lecher, who lived in Altenberg an der Donau (today part of the community of St. Andrä-Wierter ).

Richard Engländer was the son of Moritz Engländer, a Jewish merchant, and his wife Pauline, b. Schweinburg. He first studied law, then medicine, but broke off his studies and started an apprenticeship as a bookseller at the court bookstore Julius Weise in Stuttgart . He broke this off as well as another attempt to study law. In 1895 he wrote his first literary works, and through his contact with Karl Kraus , publications began in 1896 (sketch book Wie ich seeh eshees ). In March and April 1900 he resigned from “the Israelite religious community ”, then remained without a denomination for ten years and was finally baptized in 1910 in the Karlskirche . His godfather was the architect Adolf Loos . Altenberg, who had returned to Vienna after a short time in Munich, was already a well-known figure there during his lifetime, around whom the legends entwined. In 1904 he advised Marie Lang's eighteen-year-old son Heinz , who had turned to him because his lover Lina Loos had ended their mutual affair, that he should kill himself, which he then did. Arthur Schnitzler processed the incident in the unfinished "PA piece" "The Word" .

After several unsuccessful attempts to start a normal professional life, a doctor certified that he was unable to pursue a job because of “hypersensitivity of the nervous system”. He has since led the life of a bohemian , spending most of his time in coffee houses .

Despite its success, Altenberg remained dependent on donations, which his friends - including Karl Kraus and Adolf Loos - called for. For the last six years of his life he lived in a room in the Graben Hotel on Dorotheergasse in the city center. After he had often been to alcohol deprivation and mental hospitals in the last ten years of his life , he died on the morning of January 8, 1919 at the III. Medical clinic (see: Franz Chvostek junior ) of the Vienna General Hospital . He was buried on January 11, 1919 in the Vienna Central Cemetery in a grave later dedicated by the city administration in honor of the city (group 0, row 1, number 84). Karl Kraus concluded his funeral speech with the words: "Woe to the descendants who fail to recognize you!" 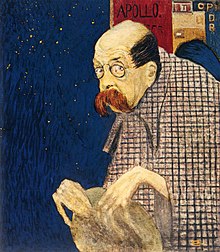 Portrayed by Gustav Jagerspacher in 1909

The Peter Altenberg's work consists solely of short prose, mostly as prose sketches or prose poems are categorized. These are snapshots of an occasional artist - fleeting impressions and encounters as well as conversations overheard by chance, which sketch the social life of Viennese modernism as so-called coffee house literature.

Altenberg himself described the process of creating these texts in a letter to Arthur Schnitzler as follows:

"How do I write ?!
Completely free, completely without hesitation. I never know my topic beforehand, I never think about it. I take paper and write. I even write the title that way and hope that something will come up that is related to the title. You have to rely on yourself, don't do violence to yourself, let yourself be horribly free, fly there -. What comes out of it is surely what was really and deeply within me. If nothing comes out, then nothing was really and deep in it and that doesn't matter. "

Peter Altenberg's art consists in suggesting a whole network of relationships with a few “literary brushstrokes” and sometimes “between the lines”. He does not try to reduce life to an ideological denominator, but rather shows it in its often contradicting diversity. Sensual impressions such as colors and smells play an important role in the sketches. Altenberg is one of the most important representatives of impressionism .

Some of the short texts are suitable for the stage. Altenberg dedicated the scene “Masks” for nine speakers and their choir, comprising only two book pages, to the architect Josef Hoffmann ; it was performed in the cabaret Fledermaus in 1907 , the designs for the set and costumes came from Carl Otto Czeschka . The writer Egon Friedell , who was a friend of Altenberg and also worked as a cabaret artist and conférencier , repeatedly read texts by Altenberg. Parts of Friedell's conversations with Altenberg later appeared as anecdotes , with Friedell claiming sole authorship. Friedell also gave Das Altenbergbuch with texts by Altenberg, Hugo von Hofmannsthal , Alfred Polgar and others. a. as well as correspondence from, to and about Altenberg.

Some of Altenberg's texts were set to music by Alban Berg and Hanns Eisler . 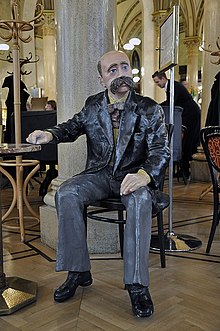 In 1929 in Vienna in Döbling (19th district) the Peter-Altenberg-Gasse was named after him.

In the Viennese Café Central he was set up as a life-size figure sitting at a coffee house table. (The figure was once made for the Wiener Festwochen .) In the office of the mayor of Vienna there is a similar figure: Peter Altenberg reads the newspaper.