The Nile Delta ( ancient Egyptian Ta-Mehet ) ( Arabic دلتا النيل) represents the delta of the mouth of the African Nile . This river delta is located in Lower Egypt directly to the north (seen from the river perspective below) of Cairo on the coast of the southeastern Mediterranean .

The Nile covers 5588 km from Lake Victoria to its mouth ; from its most distant source at Luvironza in Burundi it is a total of 6852 km.

The Nile Delta is probably the best-known estuary delta, because it was also known as "Delta" because it has the characteristic triangular shape derived from the Greek letter Delta (Δ).

About 25 km north of Cairo, the Nile fans out to form the 24,000 km² Nile Delta, after which the Nile finally flows into the Mediterranean . Today there are only two estuary arms left: the western rosette arm and the eastern Damietta arm. They were named after the cities of Rosette and Damietta , which are located at their mouths. This most fertile region in North Africa has a population of around 60 million. In antiquity, the name was given both after the estuary cities (Canopus, Bobitine, Pelusion) and after major cities that were further south in the delta on the respective arms (Sais, Sebennytos, Mendes, Tanis).

According to the Greek historian Herodotus , in antiquity in the 6th and 5th centuries BC there were BC five natural mouth arms (Historien, 2. Book 17). At that time, the Nile split into three main arms near the city of Katadupa :

Further arms branched off from the central Sebennytic estuary:

Pliny the Elder and Strabo (Geographie, 801) agree on a Phatnic and a Tanitic mouth arm, but know neither a Saitic nor a Bucolic arm. The Saitic arm, on which Sais lies, corresponds to the Bolbitinian arm, the bucolic arm to the Phatnic arm. He mentioned a total of seven arms (from east to west), the Pelusi (Aki) s, Tanitic, Mendesi, Phatn (it) si (or Phatmetic), Sebennytic, Bolbitin and Canopian (Canobe or Heracleotide) arm or Nile. It should be noted that Pliny and Strabo lived about 400 years after Herodotus, and names changed over time. In addition, the Nile Delta was subject to constant change due to the annual floods and the associated mud flood. 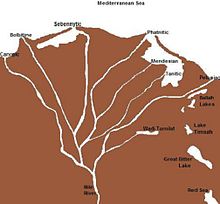 Old map of the Nile Delta

So in Roman times there were seven main arms, from west to east, they were:

The siltation began in antiquity and was largely complete in Islamic times.

The Aswan Dam and its impact on the Nile Delta

As a result of the conversion of the irrigation methods on the Nile from seasonal irrigation in flood basins to year-round canal irrigation and the delta barrages built for this purpose, as well as the construction of the Aswan dam , the Asyut, which Muhammad Ali Pascha began during his rule over Egypt from 1805 to 1848 Dam and the Zifta weir (all completed in 1902), the agriculturally built and irrigated areas were considerably enlarged. As a result, less and less water and thus less suspended matter and sediments got into the Mediterranean. As a result of the Aswan Dam , which was built between 1960 and 1971, the sediments (which had not previously been retained by the Sannar Dam and Roseires Dam ) settled in the Lake Nasser , which it dammed .

As a result, no more sediments are fed into the Nile Delta and it no longer pushes itself further into the sea, but is slowly carried away by the surf .

Places in or on the Nile Delta (downstream)

A possible rise in the sea level of the Mediterranean, which could be caused by global warming , can have fatal consequences for the Nile Delta in a very short time. A rise in the sea of ​​less than a meter can cost many millions of people their living space.