The title of this article is ambiguous. Further meanings are listed under Heliopolis (disambiguation) . 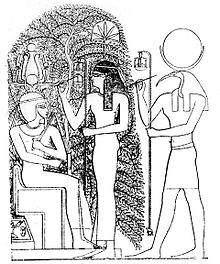 The sacred tree of Heliopolis with Thoth and Seschat

Heliopolis ( ancient Greek Ἡλιούπολις Hēlioúpolis "Sun City"; ancient Egyptian Iunu ; Old Testament On ) was since the early Old Kingdom an ancient Egyptian town in Lower Egypt northeast of present-day Cairo , in which the major Atum- and re-Harachte Temple and the "House of Benu " was standing. The god of creation Hu was worshiped as the "Lord of Heliopolis" .

From the pyramid  text 477 it emerges that, according to the Osiris myth, that mythological trial took place in the princely house of Heliopolis in which Seth was charged with the murder of Osiris and found guilty by the divine judges. Today Heliopolis is a field of ruins and an archaeological excavation site. 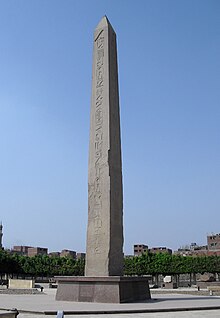 Obelisk of Sesostris I in Heliopolis (20th century BC)

According to Egyptian mythology , Heliopolis was the primeval hill that emerged first from the primeval flood , and this is where the gods came into being. The Egyptian creation myth had monumental consequences: the largest temple district in Egypt was built on the "primeval hill". Enclosing walls up to 17 meters thick and more than ten meters high finally enclosed an area of ​​one square kilometer. World-famous obelisks from around 1400 to 1300 BC BC from London, Rome and New York come from here.

The sun god Re is not archaeologically attested in Heliopolis before the 6th dynasty . The fragments of the "Djoser Chapel" show an older temple, but they are the remains of a small shrine or box for the worship of a cult statuette of Djoser . The accompanying text does not refer to Re either, but represents the speech of a community of gods; probably the ninth of Heliopolis as gods responsible for conferring royal sedfests . The fragment of an obelisk that was erected by King Teti II comes from the 6th dynasty . From the first interim originate some grave sites and from the Middle Kingdom (of the first still standing today Obelisk I. Sesostris ). Numerous remains date to the New Kingdom , including some parts of temples and tombs of important people. A particularly large number of richly furnished tombs date from the late period .

With its theological concept of the Ninth of Heliopolis, the "sun city" belonged to the religious centers of the Egyptian Empire until the late period, often in competition with the Upper Egyptian Thebes (Upper Egyptian Iunu ).

According to the tradition of Genesis , Joseph is said to have married the daughter of the high priest of Heliopolis. According to Flavius ​​Josephus , the pharaoh gave Jacob and his sons Heliopolis as a residence "where the king's shepherds also had pastures".

Pythagoras , Plato , Eudoxus of Knidos and other Greeks are said to have studied here.

In late antiquity the city was an early Christian diocese , from which the titular diocese of Heliopolis in Augustamnica of the Roman Catholic Church became. It belonged to the ecclesiastical province of Leontopolis .

Heliopolis is currently a research focus of the DAI . In 2006, the team of Egyptian and German archaeologists led by Dietrich Raue from the Cairo department discovered numerous inscription and relief fragments from the Amarna period (approx. 1350 BC) in the ruins of the Sun Temple . This proves that the old sun temple from the Old Kingdom (approx. 2650 BC) was still in function in the Amarna period.

Ramses II even had the temple significantly expanded, used the existing building material for his purposes and had u. a. erect the sanctuary and numerous statues of gods. Since Alexander the Great , the Greek rulers from Alexandria tried to support the cult, which was alien to them, but the city lost its importance. Under Cleopatra , the removal of obelisks and sphinxes began on a large scale. Augustus had an obelisk fetched from Heliopolis and placed it on the field of Mars . Two other obelisks were brought to the Caesarium in Alexandria under Augustus and are known as the needles of Cleopatra . In early Christian times the stones were used for the city fortifications of Cairo.

Today, the site no longer plays a role in the visit program of travelers to Egypt, because the temple district of Heliopolis is located under the northeastern district of Matariya in northeastern Cairo. Unimagined amounts of ancient Egyptian evidence are still lying between the rising water table and the wild buildings. An open-air museum with some excavation finds and information boards has been set up around the obelisk Sesostris I. All the greater is the contrast to the present, where garbage dumps up to 13 meters high are piling up in this place. Every day, the garbage and rubble in the metropolis of Cairo are dumped in Matariya. In a race against time and further development, the Egyptian Ministry of Antiquities and archaeologists from the Leipzig Egyptian Museum-Georg Steindorff brought the newly found cultural assets to the Obelisk Museum in Matariya. The modern Cairo district " Heliopolis ", built by the Belgian entrepreneur Empain from 1904, is located a little south of the historical site of the ancient Heliopolis.

The obelisk that can be found today in St. Peter's Square in Rome comes from Heliopolis . It was first brought to Alexandria by Gaius Cornelius Gallus , the first Roman prefect of Egypt under Augustus , and erected there. Later Emperor Caligula had it brought to Rome, where the obelisk was placed in the middle of the Circus des Caligula, which he had built on the slope of the Vatican Hill . The obelisk is 25 meters high and weighs 330 tons and consists of a single block of granite . Another obelisk from Heliopolis is in Rome in front of the Palazzo di Montecitorio .