Sesostris I is the Greek name of an ancient Egyptian king ( Pharaoh ) of the 12th dynasty ( Middle Kingdom ), who initially worked with Amenemhet I from around 1975 to 1965 BC. Ruled together. After the death of his father, he was sole ruler until his 43rd year in power. The remaining two years he ruled from 1932 to 1930 BC. Together with his son Amenemhet II.

A total of 45 years of government are recorded in the Royal Papyrus of Turin . He is considered to be one of the most important rulers of the Middle Kingdom and ancient Egypt.

Sesostris I was the son of Amenemhet I and Neferetyatenen . The mother's name is only passed down as an inscription on a statue and only survived in a copy from the 19th century. The name is unusual and so there are doubts about the authenticity of this inscription and the name.

His main wife was Neferu , who was his sister or half-sister. Itakayt was a daughter.

Today Sesostris I is considered to be one of the great kings (pharaohs) of the Middle Kingdom. In his 18th year of reign he led a campaign against Lower Nubia , in the course of which the area was conquered up to the second cataract . Various fortresses were built there to secure the new areas. This is the first time in Egyptian history that a large area outside of Egypt has come under permanent control. In the 25th year of his reign there was a famine that is mentioned in several texts. As a result of this there may have been riots: An inscription from el-Tod seems to indicate that the temple there was looted.

The vizier at the beginning of the reign was Antefiqer , who had a tomb near the pyramid of Amenemhet I in El-Lisht , is known from a number of documents and apparently was in office for a long time. His successor was probably a certain Sesostris . Sobekhotep and after him Mentuhotep are occupied as treasurers in the 22nd year . Mentuhotep seems to have been an extraordinary personality, who apparently directed several building projects by Sesostris I, including the expansion of the temple of Amun in Karnak. Several stewards are known, above all Hor , who led an expedition of the ruler, and Nacht , who had a grave in Lisht and who was involved in the construction of the pyramids of Sesostris I.

The king seems to have installed various officials in the provinces.

A rock inscription near the port of Ain Suchna on the Gulf of Suez reports that in the 9th year of Sesostris I's reign an official was sent to the mines on the Sinai Peninsula .

The end of his father

In the 20th year of his reign and ten years before his death, Amenemhet I appointed his son Sesostris I co-ruler. The father was primarily responsible for domestic politics and the reassurance of the still powerful Gau princes, while Sesostris I personally led campaigns to Nubia and Libya . After ten years of joint reign, he received news of the murder of his father on a campaign in Libya and immediately hurried back to maintain his claims to the throne.

The description given in the preceding paragraph of the end of the reign of Amenemhet I is doubted by some Egyptologists. It is pointed out that the double dates on steles and graffiti (year x of A. and year y of S.) are controversial because of their preservation and their form. They are no longer recognized as proof of co-sponsorship.

The transition from Amenemhet to Sesostris is therefore one of the most controversial issues in Egyptology . According to the " doctrine of Amenemhet ", Amenemhet I died in an assassination attempt in the harem. Sesostris was on a campaign in Libya at the time and after a dispatch returned to the palace without his troops in order to assert his claim to the throne (or to punish the putschists). It is doubted that he was co-regent at the time. In the teaching of Amenemhet and in the Sinuhe narrative he is called u. a. "Eldest son", so called heir to the throne. Whether Amenemhet really died that night was debated for a long time and asserted or disputed on the basis of grammatical criteria. It is argued that - when Amenemhet I died - the doctrine of Amenemhet was a legitimation document for Sesostris I, which was possibly read out in the palace the following day. In this scripture the deceased father from the hereafter speaks to his son.

The Sesostris I pyramid

The simply constructed pyramid of Sesostris I is located in El-Lisht and consists of star-shaped, right-angled and diagonally intersecting stone ribs that divide the building into 16 cavities. These were filled with rubble and sand and covered with limestone slabs. Over the millennia, the plates slipped and the sand in the chambers ran out. The pyramid was 105 meters square and was originally 61 meters high. The pyramid district was surrounded by a double wall and included a secondary pyramid and nine smaller pyramids for the royal family. The grave pyramids of the wives Neferu and Itakayt could be identified, whereby the second lady could also have been one of his daughters. 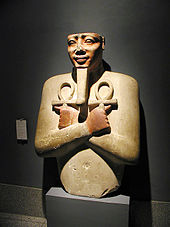 Osiris pillar of the ruler from Karnak

Sesostris I built various temples across the country. He is the first king who systematically rebuilt all temples in the country and converted them into stone temples. From the third year of his reign there is a copy of an inscription that reports on the construction of the temple in Heliopolis (Iunu). The oldest surviving obelisk in Egypt also comes from Sesostris I. It is made of Aswan granite , is 20 m high and is still in Heliopolis today. Originally it was probably there with a second obelisk in front of the entrance pylon of the temple there.

One of the oldest structures in the Temple of Amun in Karnak is the " White Chapel " of Sesostris I. Pharaoh Amenophis III. ( 18th Dynasty ) had the chapel removed and used its alabaster stones as filling material for the 3rd pylon of the Karnak Temple, where it was completely found and rebuilt. Today the White Chapel is considered to be the most beautiful and oldest surviving structure in the Middle Kingdom. The names of the Egyptian districts with their capitals are on the base of the chapel .

Another important temple was built in Abydos, which inscriptions from the 13th Dynasty refer to as the temple of this ruler. The postulated construction activity of Sesostris I at the Month Temple of Death, south of Luxor , cannot be proven in writing.

Reconstruction of the fortress of Buhen

At Buhen , between the 1st and 2nd cataracts, Sesostris I had a border fortress built. An inscription says that "no southerner should set foot on Egyptian territory uncontrollably". The structure disappeared in Lake Nasser today .

Commons : Sesostris I.  - Collection of images, videos and audio files