In ancient Egypt, the Gaue were administrative districts along the Nile that were valid for thousands of years and encompassed the entire heartland. It is the translation of the Greek word nomos , which was used in ancient sources for the ancient Egyptian administrative units.

The districts arose from local principalities of the Neolithic . In the Old Kingdom there were still 38 districts, which were later supplemented by four more. In the course of Egypt's long history, the Gaue and their rulers ( Gaufürsten ) were more or less independent of the central power of the king ( Pharaoh ). The texts of the diagonal star clocks show that each of the deans symbolized an ancient Egyptian district and that the deity of the respective dean was assigned to a district.

The amalgamation of families, hordes and tribes to form Gau had a decisive influence on the formation of the faith, first for the lower spirits and demons, later also for the deities. Almost every Gau had its own coat of arms in the form of a standard and a local deity with its own myth , which was especially venerated and granted its protection.

The oldest preserved " Gauliste " is at the " White Chapel " of Sesostris I in Karnak .

In Greco-Roman times , the old district division was essentially retained. Each Gau (Nomos) was subordinate to a strategist . The Fayum as Nomos Arsinoites was added as further administrative districts , which was divided into the four sub-areas (Meris) of Herakleides, Themistus, Polemon and the capital Arsinoe. In addition, in the western desert the districts Oasis Magna ( Charga and Dachla ), Oasis Parva ( Bahariyya ) and Ammoniake ( Oasis Siwa ), and in the east Sinai and Ethiopia on the Red Sea. Alexandria was an independent district outside the Gaus system. 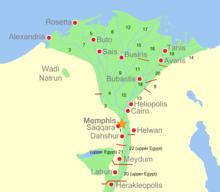