Sekhmet is a redirect to this article. For the asteroid see (5381) Sekhmet .

Sekhmet , also Sechmet , is a lion-shaped goddess in the mythology of ancient Egypt .

Her name translates as "the mighty one" and one of her epithets is "the lady of the trembling". With the ancient Egyptians she was the goddess of war but also of protection against diseases and healing.

She also embodied the eye of Re and was also associated with the dangerous uraeus serpent of the king. In Memphis , Sachmet was considered the companion of Ptah and for the pharaohs she was a symbol of their own courage to fight. 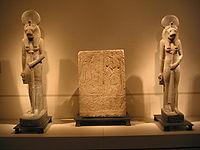 Statues by Sekhmet in the Egyptian Museum Berlin

This goddess was depicted as a seated or standing woman with a lion's head. Since the Middle Kingdom , she has been wearing the solar disk with the Uraeus on her head and the serpent spits fire on everyone whom the goddess wants to punish. In her hands she usually holds the sign of life ( Ankh ) and the papyrus scepter . Occasional representations also show Sachmet with ram or cow horns. But there are also pictures in which she wears the eye of Re instead of her head and how Min holds a knife with her arm raised. Very rare images also show them as complete lions. Often it cannot be distinguished from Bastet or Schesemtet in its depiction , but only through the hieroglyphic inscriptions. 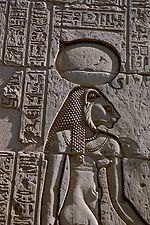 Sublime relief of the Sekhmet in the temple of Kom Ombo

Seat statues in the Temple of Karnak

Sekhmet was venerated in Memphis , Letopolis , Bubastis , Karnak, Esna and all the great temples in Nubia . In Memphis she formed a trinity with her husband Ptah and son Nefertem since the New Kingdom .

Amenhotep III had around 700 statues of Sekhmet erected in the Temple of Mut in Karnak , where both deities are depicted as lions-headed as they merge into Mut-Sachmet.

According to some researchers, the statues served the cult of the goddess over the course of the year: In front of each statue, prayers were said to appease the goddess on the individual days of the year; there was at least one prayer for each day.

Other researchers are of the opinion that this temple served to ward off a great danger and suspect the plague behind it . As evidence of this assumption they used the hastily buried dead bodies and plague prayers of the neighboring peoples, in which sick Egyptians were described.

Ten of these statues are now in the Louvre in Paris . But Sakmet was also venerated in his mortuary temple in West Thebes , of which only the Colossi of Memnon have survived today. 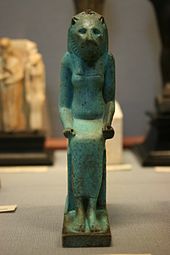 In Egyptian mythology she is the daughter of the sun god Re , the wife of Ptah and the mother of the lotus god Nefertem .

In the myth, Sachmet destroyed the opponents of Re. She also supported the king ( Pharaoh ) in the fight against the enemies of the country. In addition to her lion-like protective power, the goddess was also seen as the patron saint of healing and the doctors, who are variously documented as priests of priests. In the myth "The annihilation of mankind" Re is disappointed with the wickedness of people and sends Sachmet to kill the bad people. However, Sachmet falls into a bloodlust and kills more and more people. By a Thoth plan, Sekhmet is made drunk to stop her, and while she sleeps, Re turns her into Hathor .