Hathor is a goddess in Egyptian mythology . In her beginnings she assumed the rank of local goddess and then appeared in the form of a cow. Hathor later rose to become the sky goddess of the west and became an all-embracing mother goddess. She was also the goddess of the dead and goddess of love , peace, beauty, dance, art and music.

At least since the 1st dynasty , Hathor has been documented as a cow-shaped goddess under Narmer . On an ivory tablet from the grave of Djer in Umm el-Qaab near Abydos , she can be seen as a lying cow in front of the Serech as "Hathor in the swamps of King Djers city ​​Dep ". Her iconographic representation differs only slightly from the older sky goddess Bat . Images on vessel fragments show only a small difference in appearance of the goddess Hathor to Bat: The horn tips of the Hathor run outwards, in contrast to Bat.

On the group of statues of Mykerinos from the 4th Dynasty , Hathor is depicted on the left side of Mykerinos with the Bat emblem, while Hathor appears on his right side in her capacity as personification of the seventh Upper Egyptian Gaus . The horns of the Hathor with the sun disk in between , which has a slight curve to the outside, is clearly recognizable , while the Bat emblem shows the inwardly inclined winding of the horns of the Bat. The background of a different horn shape is likely to be seen in two different species of bovid . From the 11th dynasty , the goddess Bat completely merged with Hathor.

Her name means "House of Hor" or "House of Horus ", whereby the part of the name "house" is derived from the meaning "mother's womb", which surrounds Horus. The ideogram therefore mostly represents a Horus falcon in the “womb”. As the later wife of Re and mother of Horus, she formed the enclosing womb from which Horus sprang as her son.

Mythological connection to the sun god Re

Her mythological beginnings with Re are described as follows: Re opens his eyes inside the lotus at the moment when he left the primal chaos . A liquid formed in his eyes that fell to the ground: She transformed into a beautiful woman, who was given the name "Gold of the Gods, Hathor the Great, Lady of Dendera ". In one myth, Hathor keeps Re in her womb overnight and gives birth to him every morning. In other myths, Hathor is the eye of Re itself.

In the New Kingdom, Re is named accordingly with the epithet Kamutef as "his mother's bull", who "was conceived by Hathor". Hathor thus represents the feminine element of divine kingship and thus enables the cyclical rebirth of the king as originally ruling Horus .

In the myth "The annihilation of mankind" Re is disappointed with the wickedness of people and sends Sachmet to kill the bad people. However, Sachmet falls into a bloodlust and kills more and more people. By a Thoth plan , Sekhmet is made drunk to stop her, and while she sleeps, Re turns her into Hathor.

As one of the oldest ancient Egyptian goddesses, she later ceded some of her symbols and functions to the younger Isis . Her close connection to Isis consists in the similarities as mother and death goddess. Since the New Kingdom , Hathor can only be distinguished from Isis by the hieroglyphic inscription. 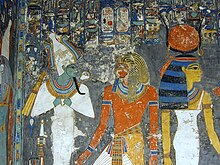 Depiction of Hathor in the tomb of the Haremhab

Among other things, jrp (irep) - wine in jugs - was sacrificed to the goddess Hathor, as this alcoholic drink was considered a symbol of blood and the power of resurrection after death. So Hathor was also called "mistress of drunkenness".

Hathor was worshiped in many places in Ancient Egypt , including Thebes , Memphis , Sais, and Abu Simbel , with Dendera being her main place of worship since the Old Kingdom . On Sinai, where she was venerated as the "mistress of turquoise", the temple of Sarabit al-Chadim was dedicated to her. But the goddess was also worshiped abroad: in Byblos , Lebanon and Timna . Together with Horus von Edfu and the sons Ihi (Sistrum god) and Harsomtus (union of the two countries), Hathor forms a family in Dendera. In Thebes she belonged to the local gods unity. In Kom Ombo , Hathor formed a triad with Sobek and her son Chons .

In the Interpretatio Graeca , Hathor was identified with Aphrodite . 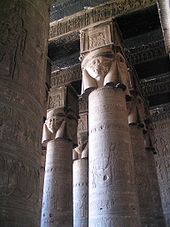 Hathor Column in the Temple of Dendera

The Hathor column , which is also called Sistrum column , is a drum-shaped column with a Hathor capital , with the face of the goddess Hathor under a block-shaped top ( sistrum ) shown on two opposite or all four sides .

The second temple in Abu Simbel , built by Ramses II for his wife Nefertari , was dedicated to this goddess, as was the temple of Dendera . The small temple of Deir el-Medina was also mainly dedicated to Hathor.

The priestesses of the Hathor were called " Hathore ". Hathors were dancers, singers and musicians and this term later referred to prophetic women and prophets. For example, a Hathore , the Hathor and Neith priestess Hetepheres , also served the pharaoh Cheops as a personal prophetess .

Hathor of Dendera is the name of a minor form of the ancient Egyptian goddess Hathor that has been rarely documented since the Greco-Roman times .

Iconographic representations are not available. Her name appeared in two priestly titles, including Philae . An inscription by Edfu says that the Pharaoh had the Mammisi built for her in the form of mistress of Dendera , which is why the Pharaoh is loved by her.