This article covers the Old Kingdom in Egypt. Old Kingdom is also a name for the Holy Roman Empire from the early modern period.

The Old Empire lasted roughly from 2700 to 2200 BC. And is the oldest of the three classical periods of Ancient Egypt . It followed the Thinite Age , which led to the formation of the Egyptian state, and included the 3rd to 6th dynasties . The first interim period that followed led to unstable political conditions in the country.

The ancient Egyptians themselves saw the epoch as the golden age and the high point of their culture. De facto , the time was marked by extremely long-lasting political stability and the internal order of the country was not endangered by any external threats. The centralization of the state, which had already begun in the age of the Thins, and the slowly increasing prosperity in the population led to considerable architectural and artistic achievements. It came to the emergence of the first major genres of classical Egyptian literature , the canonization of painting and sculpture , but also to numerous new product launches in the administration were to endure for nearly three millennia.

The Old Kingdom is the age of the great pyramids that emerged in the area of ​​the then capital Memphis : first the step pyramid of Pharaoh Djoser in Saqqara , then later the three monumental pyramids on the plateau of Giza (of Cheops , Chephren and Mykerinos ), which count among the seven wonders of the ancient world . The pyramids impressively reflect the central position of the rulers in society and their power, which thereafter remained unmatched in ancient Egyptian history . At the same time, they make clear the further development of the administrative apparatus and its ability to mobilize material and human resources. But they also show the considerable advances in architecture and art and reveal the central role that the cult of the dead and belief in the afterlife played at this time.

The main source for the Old Kingdom are the pyramids and their temples , but the latter are often badly damaged. In the pyramid burial chambers of the 6th dynasty in particular , texts were found that represent an extensive source of belief in the dead of the epoch.

Next to the pyramids there are extensive cemeteries of the highest officials , whose graves are often richly decorated with reliefs and inscriptions. So far, necropolises in the provinces have received little attention in research. After all, there are some important decorated tombs of local dignitaries from the late Old Kingdom.

Settlements from the Old Kingdom have hardly been excavated so far. The pyramid city of Giza has recently become an exception . Only a few temples from this period have been examined so far. In contrast to later eras, they seem to have been rather small and undecorated. Two sanctuaries for the cult of the sun and the king are an exception . There are only a few papyri from the Old Kingdom, the most important ones were found in Abusir and represent administrative documents for a pyramid temple. 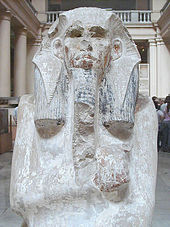 The 3rd dynasty (2700 to 2620 BC) followed the Thinite period , which led to the unification of the empire and the formation of the first Egyptian state. The dynasty is commonly assigned to the Old Kingdom, as it marked the beginning of the pyramid construction that was decisive for this era . Some researchers prefer to put them in direct continuity with the 1st and 2nd Dynasties , which have many similarities in terms of political organization and cultural aspects. The transition from the 2nd to the 3rd dynasty does not represent a real change of dynasty, as the first rulers of the 3rd dynasty descend in a direct line from the royal house of the previous dynasty.

There is some uncertainty about the number and sequence of the kings of the 3rd dynasty. Problems are caused by the fact that the birth names handed down almost exclusively in later lists can only rarely be brought into line with the Horus names occurring at the time. Of the five or six Horus names handed down from this period, only Netjeri-chet can be clearly assigned to King Djoser . The order of the next three rulers, Sechemchet , Chaba and Sanacht, on the other hand, is uncertain. The presumably last ruler Huni was tentatively identified with the Horus name Qahedjet , but this assignment is not certain. The figures for the duration of the 3rd dynasty vary between 50 and 75 years.

King Djoser is regarded as the most important ruler of the 3rd dynasty, as he had the first step pyramid and the first monumental stone structure in human history built with his pyramid complex in Saqqara . For the construction of the pyramid, which represents a high point of the early Egyptian stone construction, enormous advances in the logistic organization were necessary, which could only be achieved through a well-functioning, tightly organized administration . Imhotep is known as one of the most famous officials of this time , who worked as a consultant and builder for Djoser and was revered and even deified as a legendary inventor until the late period. Visible progress in the field of fine arts can best be seen in works from Djoser's reign, which in their execution clearly stand out from the previous epoch.

The 3rd Dynasty was marked by the strengthening of the central state, which was ruled from the new capital Memphis on the border between Upper and Lower Egypt . The high dignitaries no longer allowed themselves to be buried in cemeteries in the province as in the early days, but were given a place in the royal necropolis. The small pyramids built in many places in the empire towards the end of the dynasty underline the growing influence of the central government on the provinces. To procure building materials and other important raw materials, expeditions were sent to distant areas, for example to Wadi Maghara in the west of Sinai .

The three great pyramids on the Giza plateau , erected in the 4th Dynasty.

The 4th dynasty (2620-2500 BC) was founded by Sneferu , who may have been a son of Huni. In a period of about 100 years seven kings took turns, of which the four kings Sneferu, Cheops , Chephren and Mykerinos ruled a relatively long reign of between 18 and 30 years.

The dynasty was a heyday of Egypt and is remembered by posterity for the largest pyramids ever built in Egypt. Its founder Sneferu, who was considered the ideal of the just king, undertook distant expeditions to Nubia and Libya and had a border fortress built to protect the country; Furthermore, he had three large pyramids built one after the other in Meidum and Dahshur , which initiated the transition from the step pyramid to the real pyramid. His successor Cheops chose the Giza plateau as the building site for his pyramid , which with originally 146.59 meters is the highest in the world. Its enormous size prompted ancient authors to portray him, in contrast to his father, as a megalomaniac and tyrannical ruler, but in reality he still enjoyed an independent cultic veneration well into the late period. Two of his sons, Djedefre and Chephren, succeeded him on the throne. Djedefre was the first king to call himself “ Son of Re ”, and Chephren had another large pyramid built next to that of his father. Little is known of the subsequent King Bicheris . Only his successor Mykerinos had a third pyramid built in Giza. The last king of the dynasty was called Sheepseskaf . In Manetho a certain thamphthis has come down to us, but this cannot be confirmed by contemporary evidence.

The implementation of the large building projects of this dynasty required a much more complex and efficient administration than in the dynasty before. The administration was continuously expanded and finally included an “office for royal works”, which specifically took care of the erection of monuments. The tasks included the recruitment of workers, the construction of extensive workers' settlements for their supply and accommodation not far from the building sites, the implementation of large and technically demanding construction projects, the development of quarries that could be located outside the responsible administrative area ( Hatnub , Fayyum , Wadi Hammamat , Sinai) as well as the supply of raw materials to the Memphis region. All state power was concentrated in the person of the Pharaoh, whose divine character manifested itself more than ever before in his building projects. The highest office positions in the administration were mostly occupied by princes. It is known from some high court officials that they could occasionally be used as administrators in the provinces.

Expansion of the Egyptian Empire

The rulers of the 5th dynasty (2504 to 2347 BC) are better known than those of the previous dynasties, both through archaeological finds and traditional texts. Their time is marked by smaller pyramids, often located at Abusir , and temples of the sun god Re.

The kings (pharaohs) had to share their absolute power with the rising nobility and a growing bureaucracy. We owe much of the surviving texts to the latter.

The so-called pyramid texts were found for the first time in the Pyramid of Unas , which are the oldest religious texts in human history. The tradition of placing otherworldly literature in royal graves was continued in the Middle Kingdom with the coffin texts and in the New Kingdom with the various books on the underworld ( Amduat , Cave Book , Port Book, etc.). Papyri with the Book of the Dead were found in non-royal graves of the New Kingdom .

The 6th dynasty (2347 to 2216 BC) culturally continued the 5th dynasty. A decentralization of the administrative structures with administrators spread across the country created regional centers, which gained in importance as the rulers lost their influence. The central government lost more and more influence after military campaigns against Libya , Nubia and Palestine .

The latest research suggests that climate changes (see 4.2 kilo-year event ), with the absence of Nile floods, could have contributed to the decline of the Old Kingdom. The recent upheavals in Sumer and the Indus culture also speak for it.

The First Intermediate Period begins with the collapse of the central government .