Shepseskaf was the seventh and last known contemporary king ( pharaoh ) of the ancient Egyptian 4th dynasty in the Old Kingdom . He ruled from about 2510 to 2500 BC. There is very little evidence of his person. The only known events from his short reign are the completion of the temple complex of the Mykerinos pyramid and the construction of his own tomb in Saqqara- South.

The family circumstances of Schepseskaf are largely in the dark. Since a decree has proven that he had the mortuary temple of his predecessor Mykerinos completed, George Andrew Reisner assumed that he must be his son. However, this assumption cannot be considered certain as the decree does not contain any kinship information. The completion of the tomb by the successor of a deceased pharaoh does not depend on whether there is a family relationship.

Sheepseskaf's mother is unknown. The relationship with three other women is also unclear. Chamaat, who bears the title of a king's daughter, could either be a daughter of Sheepseskaf or of Userkaf , the first ruler of the 5th dynasty . Queen Bunefer , buried in Giza, could have been his wife or daughter, and the same applies to Chentkaus I.

Shepseskaf only ruled for a few years, but the exact length of his rule is uncertain. The Royal Papyrus Turin , which originated in the New Kingdom and is an important document on Egyptian chronology , gives four years and a few months, which was in the 3rd century BC. Living Egyptian priests Manetho names seven years. The highest contemporary documented date is a “year after the first count” (meaning a nationwide census of cattle for the purpose of tax collection), which corresponds to his second year in government. In Egyptology, a reign of four to five years is assumed by the majority in Egyptology, following the royal papyrus of Turin, but a longer reign of seven to eight years is also occasionally considered because of the size of his tomb.

His first year of reign is partly preserved on the Palermostein . Accordingly, he ascended the throne on Peret IV on 25th . The exact date could be determined from the calendar year regulation in the Egyptian administrative calendar , which was decisive for the reigns. The fragment also tells of the accession ceremonies during the celebration of the unification of the two countries , such as the appearance of the king of Upper and Lower Egypt and a parade around the wall. Birth of the Upuaut . In addition, the choice of the burial site seems to be noted, although the latter entry has been somewhat destroyed and another interpretation is possible. Qebeh Shepseskaf, the name of his tomb, is certainly mentioned there.

Apart from the information about the accession to the throne and his building activities, no events from Shepseskaf's reign have come down to us. The transition to the 5th dynasty after his death is still largely unclear. Between him and Userkaf a king seems to have ruled for only two years, whom Manetho calls Thamphthis , but who is not documented at the time. Chentkaus I is also partly considered as a short-term ruler or regent . 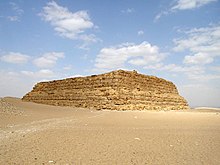 Sheepseskaf built his own tomb in Saqqara- South, halfway between the step pyramid of Djoser in Saqqara and the pyramids of the founder of the 4th dynasty Snofru in Dahshur . He deviated from the now established concept of the pyramid as a royal tomb and instead resorted to the older form of the mastaba . His tomb, known as Mastabat al-Fir'aun , consists of two steps at its core and is 99.6 m long, 74 m wide and around 18 m high. Served as a building material of red sandstone , the panel consisted originally of Tura - limestone and in the lowest layer of bricks from red granite .

When building the underground chamber system, however, he retained the concept used for the pyramids. The entrance is on the north side of the mastaba. The construction work on the chamber system has not been completed. The sarcophagus , which was probably made of greywacke or basalt , is only preserved in fragments. 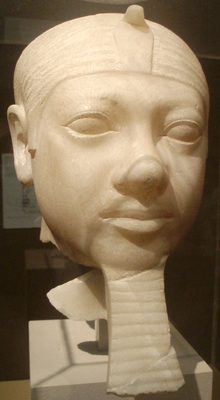 Head of an alabaster statue, which was previously attributed to Schepseskaf, but today mainly to Mykerinos; Museum of Fine Arts , Boston

There is no nearly completely preserved statue that shows the image of Sheepseskaf beyond any doubt. Only fragments of the lower half of a seated statue were found in the mortuary temple of his own tomb. These consist of dolerite and are now in the Egyptian Museum in Cairo (Cairo JE 40704). In the case of another piece it is unclear whether it depicts Sheepseskaf. It is an alabaster statue head , which is now in the Museum of Fine Arts in Boston (Boston 09.203) and which was discovered by George Andrew Reisner at the beginning of the 20th century in the valley temple of the Mykerinos pyramid. Since the find showed a very youthful face, Reisner considered the possibility that it might not be a portrait of Mykerinos, but of Schepseskaf. He was encouraged in this assumption, as he found other fragments of alabaster nearby, one of which bore the name of Shepseskaf. Today, however, it is predominantly assumed that the statue head actually represents Mykerinos, as the facial features are very similar to those of other statues of this king.

Sheepseskaf in memory of ancient Egypt

Sheepseskaf seems to have enjoyed only a very minor cult of the dead after his death, which is probably due to his very short reign. Only three priests of the dead and officials associated with the cult of the dead are recorded for him. This number is extremely small compared to the other rulers of the 4th dynasty, for example 73 for Cheops and 21 priests of the dead and officials for Mykerinos. The cult also seems to have died out faster than its predecessors. While the cult of his predecessors lasted until the 6th dynasty, for Sheepseskaf it can only be traced back to the 5th dynasty.

The economic importance of the cult also played only a minor role under Sheepseskaf. Numerous agricultural goods ( domains ) were usually created for the supply of offerings . A total of 60 domains can be found for Cheops, but only two for Sheepseskaf.

The only known mention of Shepseskaf in the Middle Kingdom comes from a relief that a butcher named Ptahhotep had installed in the courtyard of the mortuary temple of Mastabat al-Fir'aun. Apparently a priesthood for Sheepseskaf was established again in the early Middle Kingdom, because Ptahhotep speaks to his priest on the relief to make offerings to him (Ptahhotep). So he makes use of the reputation of the deceased king in order to secure his own sustenance in the afterlife.

In the New Kingdom , several simple graves were dug in the courtyard of the Mastabat al-Fir'aun during the 18th dynasty . In the 19th dynasty that followed, a nationwide restoration program took place under Ramses II , led by his son Chaemwaset . Repair work from this period is also recorded in inscriptions on Schepseskaf's tomb.