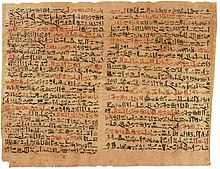 Edwin Smith papyrus in hieratic script (around 1550 BC)

The hieratic script (from ancient Greek ἱερατικός hieratikós 'consecrated', 'holy', also: 'priestly') is a script closely related to the hieroglyphics , which was used from the 3rd millennium BC onwards. Was used in Egypt and written with a brush or rush on papyrus (or similar suitable material such as ostraka made of limestone or clay). It was used until the 3rd century AD. Although it remained unchanged in its basic structure, there were great differences in form, which are linked to certain types of text and periods, so that Egyptology includes the subject of palaeography due to the hieratic .

The beginnings of the hieratic can already be seen in the predynastic period , whereby these are no coherent texts, but isolated testimonies and fragments. According to current knowledge, the hieratic was not derived from the hieroglyphs, but presumably arose simultaneously with them; in fact, the oldest known hieratic text fragments are older than the oldest known hieroglyphics. In the early days, the two scripts only differed in that the different writing material - stone or papyrus - required them.

From this early cursive script, which was very closely linked to the hieroglyphs , the ancient hieratic , which has been documented since the 4th dynasty and which still corresponds relatively directly to the hieroglyphic forms , arose . At that time the hieratic was written in vertical columns arranged from right to left on the papyrus sheet. The merging of two hieroglyphic characters in one hieratic character occurs for the first time ( ligatures ) . Ligatures only developed on characters that were often written one after the other, such as: B. n and t , m and ˁ or the like. They were a small, by no means dominant part of the written language.

This developed into the Middle Hieratic, which was used in the Middle Kingdom and the Second Intermediate Period, as well as in some cases in the New Kingdom . Here, the hieratic script is divided into two different types for the first time:

In the middle hierarchy the transition from columns to rows took place. The lines were always written from right to left, the lines were arranged from top to bottom on the sheet.

The new hieratic has been found since the 18th dynasty. Since the New Kingdom there has been an increasing separation between the literary-religious style ( unique ) and the chancellery script . The unique became more calligraphic, but there was also a proliferation of characters and lively fillings, which is partly related to the hieroglyphic writing of New Egyptian. The chancellery, on the other hand, became so shortened at the end of the New Kingdom that the style was sometimes referred to as abnormal hierarchy . Different styles can be identified, especially within the neo-hieratic, also within the unique and italics . After the 3rd interim period , the abnormality was given up.

In the Neo-Hieratic, differences between Thebes and Memphis can be highlighted for the first time .

From 660 BC It was gradually replaced by the demotic script, but remained as a sacred script for several centuries .

The discoverer of the hieratic is Jean-François Champollion ; In 1821, a year before the hieroglyphs were deciphered, he recognized the hieratic as a written language. Adolf Erman identified 17 different manuscripts in the fairy tales of the Westcar Papyrus and provided an impetus for Georg Möller's Hieratic Paleography . In 2001 Ursula Verhoeven coined the word hieratogram .

Parallels and differences to hieroglyphics

Hieroglyphic and hieratic script influenced each other; the connection was recognizable at all times. Almost all hieratic signs (except ligatures ) have a hieroglyphic equivalent. With some characters this can be proven at first glance (some animal hieroglyphs), with some the similarity lost in the course of development. The hieratic is however exclusively left-handed; the writing direction no longer adapts to images or the like. The orthography of the hieratic is stricter than that of the hieroglyphic script. Complicated characters are avoided or simplified; according to Sir Alan Gardiner, the hieroglyphic takes over from the hieratic. The hieratic knows verse points as well as highlighting of text passages in red color.

The arrangement of the characters (columns or lines) can limit the date of origin. An Egyptologist who specializes in hieratics can date based on the writing style.

The treatment of the document also provides information about its function: how often it is creased or folded, whether it is sealed or perforated, how many different manuscripts can be found on the manuscript and the like.

The translation into hieroglyphic requires some instinct, since paleography only exists for the most well-known documents . But even with these well-known characters can look strange, so you have to pay attention to features such as curvature, extensions, and the direction of the characters (from top to bottom or from left to right).

The transfer from the hieratic is the main reason why there are deviations in the transliteration in hieroglyphs in many literary texts: The hieratic signs have been assigned to different hieroglyphs.