The early dynastic period of Egypt ( 3100 - 2686 BC ), also known as the early period , the thinite period or the archaic period , is an epoch in ancient Egyptian history and follows on from the predynastic period . The 1st and 2nd dynasties of kings ( pharaohs ) belong to it , whereas the 3rd dynasty already belongs to the Old Kingdom .

The early dynastic period begins with the unification of Upper and Lower Egypt under Menes , whose life was handed down mythologically embellished. This is also where the origin of the almost 3000 year long government by kings, who were considered to be descended from gods, can be found.

Data obtained by using the radiocarbon method now lead researchers to the view that the chronology of the predynastic up to and including the 1st dynasty of the early dynastic period should be specified and corrected with regard to the timeline.

For the first dynasty, the historical succession of rulers is considered secure. The first king was Menes or Narmer , the last ruler was Qaa , a total of eight rulers are assigned to the dynasty. All these rulers were buried in Abydos . Until the end of the 1st Dynasty, it was a tradition that close relatives and high-ranking servants had to follow the king to his death. They were buried in small, almost square side graves directly at the royal grave.

Queen Meritneith played a special historical role at the beginning of the reign of King Den . Clay seals from the grave of this lady in Abydos as well as the extraordinarily large grave complex with its own cult area and its own grave stele of royal format allow the conclusion that she took over and directed the affairs of government for King Den for a time, as the latter was probably still too young for the royal office . So he shared the royal throne with his mother. Similar cases are also known for the queens Nofrusobek ( 12th dynasty ) and Hatshepsut ( 18th dynasty ).

The first dynasty was marked by numerous administrative innovations and introductions. For the first time, titles such as Hatia , Adj-mer and Iripat appear for high officials and members of the royal family. Under King Hor-Den the king's title Nisut-Biti is introduced, his successor Anedjib supplements this with the title Nebuj . Each ruler of the first dynasty had his own royal residences built. The foreign policy was of bartering with neighboring kingdoms such as Syria , the Levant and Nubia coined. Egypt repeatedly took military action against the neighboring kingdom of Libya to the west .

For the end of the first dynasty, Egyptologists such as Wolfgang Helck , Peter Kaplony and Dietrich Wildung suspect the chaos of the throne, during which the royal cemetery of Abydos was the victim of looters and arsonists . The names of obscure rulers such as Seneferka , Sechet and “Vogel” fall during this period . 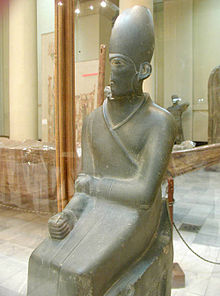 Statue of King Chasechemui in the Egyptian Museum in Cairo

At the beginning of the second dynasty, Egyptologists reliably assign three kings chronologically . The first regent was Hetepsechemui , followed by kings Nebre and Ninetjer . After the death of the third regent, there seems to have been another turmoil of the throne.

Egyptologists such as Wolfgang Helck , Walter Bryan Emery , Hermann A. Schlögl and Jürgen von Beckerath believe it is possible that an empire split during the 2nd Dynasty, during which the halves of Upper and Lower Egypt were separated into administratively independent empires. Kings like Sened , Seth-Peribsen and Sechemib-Perenmaat therefore only ruled in Upper Egypt, where they established their center of power in Abydos , while rulers like Seneferka , Neferkare / Aaka , Hudjefa and Neferkasokar resided in Lower Egypt and chose Memphis as their seat of government. The reason for the assumption is, among other things, clay seal inscriptions of the kings Peribsen and Sechemib, which show a clear separation between the administrative centers of Upper and Lower Egypt. Among the aforementioned kings, royal seals called themselves explicitly "sealers of the king of Upper Egypt" and high administrative officials called themselves "administrators of the king of Upper Egypt".

The real name of King Seth-Peribsen , who, contrary to previous traditions, replaced the Horus falcon with the Seth beast and thus indicated that he apparently came from the south and only ruled there, is seen as a further clue for a division of the empire . His empire extended to Elephantine .

A third clue that possibly points to a division of the country is the list of kings of Saqqara and the Turin royal papyrus , in which a conspicuously large number of cartouche names are listed for the second dynasty . While some of them can be assigned to certain rulers, names remain for which no contemporary inscription or no contemporary Horus or Nebtin name can be used. Either these kings are to be regarded as purely fictional , the result of accidental duplication of names or their contemporary bearers have yet to be discovered.

The reason for the split in Egypt could have been state-religious conflicts . This assumption is nourished by Peribsen's decision to place the Seth beast above his Serech, but the name of King Nebre also gives rise to speculation , as he was the first Egyptian ruler to integrate the solar disk of the (later) god Re into his name. So far, however, there is no evidence of conflicts between priestly castes as the cause of a formal division of the empire and the individual theses are not uncontested. Another motivation for such a double regency could in the rapid expansion of the managed districts are established and the growing population during the second dynasty. The constant increase in goods and state domains to be supplied made the introduction of new offices necessary, because internal political tensions and increasing economic grievances could have arisen, whereupon a - purely formal - division of the empire was seen as necessary.

King Chasechemui , last ruler of the second dynasty, was able to reunite the administrative centers and was therefore able to rule as sole ruler over a reunited Egypt.

The Old Kingdom follows on from the Early Dynastic Period .