The Museum of Fine Arts, Boston (German: Museum der Schönen Künste ) is an art museum in Boston , Massachusetts , United States, and is one of the largest museums in the country.

As early as 1807, the Boston Athenæum was the first institution to be used as a museum in Boston. This institution, founded by merchants, writers and politicians, housed a library as well as gallery rooms for a rapidly growing art collection. In 1870 the Museum of Fine Arts was founded, which was able to open its first own museum building on July 4, 1876 for the 100th anniversary of the USA. The basis of the collection was taken from the holdings of the Athenæum.

In 1949, the director of the Museum of Fine Arts, George H. Edgell, commissioned the Frankfurt art historian Georg Swarzenski, who had emigrated in 1938 , to set up the museum's medieval department as curator. Swarzenski, a friend of Max Beckmann , was director of the Städelsche Kunstinstitut in Frankfurt am Main until 1938 . His exhibition "Arts of the Middle Ages 1000-1400" caused a sensation in 1940 and brought the Middle Ages into the focus of a large public in the USA. The medieval collection in Boston is now the third largest of its kind in the United States. Georg Swarzenski retired in 1956, and his successor in the museum was his son Hanns Swarzenski , also a respected art historian. Through his close acquaintance with Max Beckmann, Alexander Calder and Henry Moore , he was able to convey some important works to the department for contemporary sculpture. 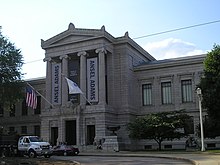 The first museum building was built according to plans by the architects John Sturgis and Charles Brigham in neo-Gothic style in Copley Square in Boston. The building, inaugurated in 1876, had to be expanded in 1879 and 1890 to accommodate the museum's rapidly growing collections. In 1899, the museum management decided to build a new museum building on Huntington Avenue, as there were no further expansion options at the previous location. The Fairmont Copley Plaza Hotel is located on the site of the old museum building .

In 1907, the architect Guy Lowell was commissioned to build the new museum building, which represents the core of today's museum complex. The building, designed in the classicism style, was inaugurated in 1909 with a first construction phase. It was financed through donations from the Boston population. Just two years later, Maria Antoinette Hunt (Mrs. Robert Dawson Evans) donated over one million dollars to build another wing of the museum. This building, also designed by Lowell, was inaugurated in 1915 and, in addition to further exhibition rooms, also contains an auditorium. Between 1982 and 1986 this area of ​​the museum was redesigned by Ieoh Ming Pei .

The painter John Singer Sargent was commissioned in 1916 to design the rotunda of the museum building. Between 1921 and 1925 a total work of art consisting of painting, sculpture and architectural ornaments was created here. The School of the Museum of Fine Arts, which is part of the museum , was able to move into an extension also designed by Lowell in 1927. In addition to a large lecture hall, library, classrooms, studios and exhibition rooms, there is also a café here. The opening of the decorative arts wing took place the following year. In addition to more than 50 exhibition rooms on three floors, a large inner courtyard and sculpture garden were also created here.

With the Forsyth Wickes extension (1968) and the George Robert White wing (1970), the architect Hugh Stubbins added other buildings to the museum. In 1981 the west wing of the architect Ieoh Ming Pei was opened, which is mainly used for temporary exhibitions. In 1999 the Norman Foster architecture firm was commissioned to draw up a master plan for future museum design. The ambitious project to renovate and expand the museum has a volume of $ 500 million and is financed by donations alone.

The new West Wing ( Art of the Americas Wing ) was opened to the public on November 20, 2010 and attracted more than 13,500 visitors on this festival day, which Mayor Thomas Menino proclaimed "Museum of Fine Arts Day".

Art from Africa, Asia and Oceania

The Africa collection shows masks, sculptures, utensils and jewelry mainly from West and Central Africa. The outstanding examples include wood carvings from the Congo and Nigeria .

The Oceanian Art Collection includes works of art from the end of the 19th to the middle of the 20th century. The focus here is on the islands of Melanesia, including Papua New Guinea . In addition, works from Polynesia , the Marquesas and the Māori from New Zealand are shown. 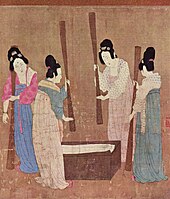 The Art from Southeast Asia section shows art objects from the first millennium BC to the 19th century. Impressive sculptures from Java and Vietnamese ceramics should be emphasized .

The art of Korea is represented in the museum by jewelry and ceramics from the period of the three kingdoms (approx. Birth of Christ - 668), green glazed ceramics, gold-plated silver vessels and other Buddhist objects, which were used for the court and the nobility during the Goryeo era ( 918–1392) as well as other works from the Joseon Dynasty (1392–1910).

The collections of Chinese art are particularly extensive . The objects on display range from the Neolithic to the present day. Numerous examples of Chinese ceramics, bronzes, paintings, calligraphy, textiles, stone sculptures as well as lacquer and jade work can be seen.

Another focus of this department is the art of Japan . With over 100,000 works of art, the Boston Museum of Fine Arts has the largest collection of Japanese art outside of Japan. These include Buddhist art from before the eighth century, medieval scrolls, masks from the Nō theater , samurai swords , screens, textiles, woodcuts and prints, as well as paintings from the 15th to the 19th centuries.

The museum also has one of the largest collections in the United States of Indian art . In addition to numerous sculptures, paintings and decorative art, artefacts from the Hindu valley, early Buddhist sculptures and miniature painting should be mentioned here. 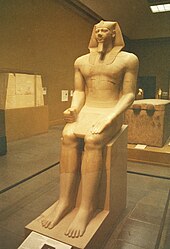 This section shows works of art from 7,000 years of cultural history from Nubia, Egypt, the Middle East, Asia Minor, Greece and Italy. In addition to architectural fragments, sculptures, paintings, vases and decorative art, the collection also includes over 8,000 ancient coins.

The museum shows numerous archaeological finds from Mesopotamia and Persia , a bust of Gudea von Lagasch , a silver vessel of the Hittite king Tudḫaliya II in the form of a clenched fist, a group of reliefs from the Assyrian palaces of Nineveh and a walking lion made of glazed bricks from the Processional Street of Babylon .

The 45,000-object collection of Egyptian art focuses on the art of the Old Kingdom . Here the museum has one of the largest collections outside of Egypt and carried out excavations in the Giza necropolis for over 30 years at the beginning of the 20th century . The museum also has extensive holdings from the Middle Kingdom , the New Kingdom and the Greco-Roman era. Sculptures, sarcophagi, architectural fragments as well as papyri and objects of cabaret can be seen.

In addition, numerous objects from the Nubian Empire of Kush are shown, which come from the museum's own excavations in southern Egypt and Sudan. These include colossal statues of the kings Aspelta and Anlamani as well as ushabtis from the tomb of the pharaoh Taharqa .

The collection of Etruscan art includes numerous ceramics, gold jewelry, bronze mirrors, colored terracotta bricks and two stone sarcophagi. Greek art is also represented with numerous objects in the museum. These include vases, sculptures, coins and jewelry from mainland Greece, Crete and Cyprus. Marble sculptures, coins, gems and cabaret belong to the holdings of the collection of Roman art .

The scope of this department includes 24,000 objects of decorative art and sculptures as well as more than 1,600 paintings from the Renaissance to the present day.

From the extensive collection of decorative art, the department for English silver work is particularly noteworthy, represented by artists such as Robert Adam and William Kent . In addition, the museum exhibits a wide variety of European porcelain and French decorative art from the 18th century.

The masterpieces of European sculpture from the 11th century to the present include artists such as Donatello , Jean-Antoine Houdon , Edgar Degas , Auguste Rodin and Henry Moore .

The collection of 19th century French paintings is of outstanding size and quality. Both the Barbizon School and the Impressionist and Late Impressionist painters are represented with top works. The museum has the world's largest collection of works by the painter Jean-François Millet and the largest collection of Claude Monet's works outside of France. There are also pictures by Jean-Baptiste Camille Corot , Gustave Courbet , Édouard Manet , Edgar Degas , Paul Cézanne , Pierre-Auguste Renoir , Paul Gauguin and Vincent van Gogh .

The collection area of ​​this department begins with gold work from pre-Columbian times and ceramics from the Maya . The art of the United States is particularly rich. There is furniture, paintings and silver work from colonial times. In so-called period rooms , individual rooms from the respective American era are set up as examples. In the field of handicrafts, objects from Tiffany's workshop should be highlighted. In addition to the painters from the Hudson River School , the artists John Singleton Copley , John Singer Sargent , Mary Cassatt and Winslow Homer can be seen with large groups of works in the museum. In particular, the collection of 19th century art comes to a large extent from the art collector Maxim Karolik .

The more than 27,000 objects in this department include African textiles, tapestries , rugs from the Middle East, European and American haute couture fashion , Persian silk work and Indonesian batik work. There are also textile works from pre-Columbian times and from Japan as well as numerous accessories such as fans, hats and shoes.

Images of works of art in the museum