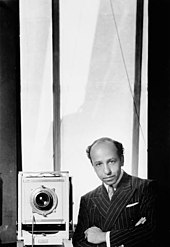 Yousuf Karsh (born December 23, 1908 in Mardin , Ottoman Empire as Howsep Karshian , † July 13, 2002 in Boston , USA ) was a Canadian photographer of Armenian origin. He was one of the most important portrait photographers of the 20th century.

Karsh was born in southeastern Turkey. At the age of 14, he and his family had to flee to Syria to avoid persecution following the Armenian genocide . Two years later, his parents sent him to live with his uncle George Nakash, a photographer in Sherbrooke , in the province of Quebec , Canada . After a short school visit he assisted his uncle in his studio. Nakash noticed his nephew's talent and sent him to Boston, USA for training with the portrait photographer John Garo.

Four years later, Karsh returned to Canada. He founded his own studio on Spark Street in Ottawa , the Canadian seat of government. The Canadian Prime Minister William Lyon Mackenzie King became aware of him and arranged numerous portrait sessions with Canadian dignitaries. As a result, he also photographed personalities from show business, but he achieved international fame with his portrait of Winston Churchill , who visited Canada in 1941.

The only photographer and the only Canadian, Karsh was named to the list of the One Hundred Most Influential Personalities of the 20th Century by the International Who is Who 2000. He had portrayed more than half of the other chosen ones on this list.

Karsh died in 2002. He was buried in Notre Dame Cemetery in Ottawa .

In the studio, Karsh was a master of lighting. A special feature of his work was the separate illumination of the hands of those portrayed. He photographed many of the important and celebrated personalities of his generation. The journalist George Perry wrote in the London “Sunday Times”: “ When the famous start to think about their immortality, they turn to Yousuf Karsh ”.

Karsh had a remarkable talent for capturing the characteristics of a person in his recordings. He himself wrote in 1967: “There is a secret hidden in every human being and as a photographer it is my job to reveal this according to my abilities. This revelation, if it succeeds, will reveal itself in a split second in an unconscious gesture, a shimmer of the eye, a brief lifting of the mask that all people wear to hide their very self from the world. At this moment of possibility, the photographer has to act or he will gamble away his chance. "

" When one sees the residuum of greatness before one's camera, one must recognize it in a flash. There is a brief moment when all that there is in a man's mind and soul and spirit may be reflected through his eyes, his hands, his attitude . This is the moment to record. This is the elusive moment of truth ".