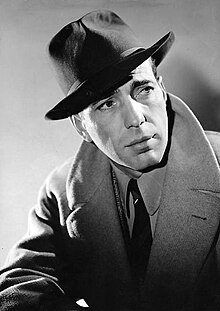 Humphrey DeForest Bogart (born December 25, 1899 in New York , † January 14, 1957 in Los Angeles ) was an American film actor . In 1999 the American Film Institute voted him "Greatest Male American Film Star of All Time". With his representations of tough, experienced, often cynical and consequently an inner moral code of characters, he became an acting icon of the 20th century .

After he started his acting career in the theater, came Bogart end of the 1920s with the sound film to Hollywood. During the 1930s, he was best known as a supporting actor in gangster roles, including The Petrified Forest and Chicago, Angels with Dirty Faces . At the beginning of the 1940s, he made his big breakthrough as a film star. In particular , he shaped the film noir with films like The Trace of the Falcon , Dead Sleeping Firmly and Gangsters in Key Largo like no other actor. His most famous role is the cafe owner Rick Blaine in the 1942 cult film Casablanca . He received the Oscar for Best Actor for his appearance in the adventure film African Queen (1951).

Bogart was born as the son of the surgeon Dr. Belmont DeForest Bogart (1867–1934) and the illustrator Maude Cecil Humphrey (1868–1940) were born into a wealthy family. He was raised primarily by an Irish nanny. His lisp - caused by a badly healed lip injury - brought him a lot of ridicule as a child. Bogart was sent to good schools, but showed poor performance and an aversion to authorities. Because he was expelled from Phillips Academy in 1918 for bad behavior , Bogart did not graduate from high school .

Bogart was the spring of 1918 to the Navy , but was no longer in the First World War used. Essentially, his ship was used to transport troops. The frequently encountered claim that his lip injury was caused by a shrapnel when his ship was shot at has been rejected by Bogart's close friend David Niven in his memoirs. In the early 1920s, Humphrey Bogart was in charge of the New York theater company and the small film studio of a family friend and began working as a theater actor on Broadway . In 1920 he also had a tiny role in a film made in New York. From 1930 he made his first films in Hollywood . He had his actual film debut at the side of Joan Blondell in the short film Broadway's Like That . However, a breakthrough was not in sight either in front of the camera or on stage. Bogart accepted the acting, but the meaningless roles he had to play did not satisfy him. During this time Bogart met his lifelong friend Spencer Tracy , whom he admired and who was the first to nickname him "Bogie" in 1930.

In 1935, Humphrey Bogart was offered a role that was rather unusual for him at the time: in the play The Petrified Forest , he played the gangster "Duke Mantee" on the run alongside leading actor Leslie Howard . With 197 performances, the piece was a great success. Warner Bros. bought the film rights to the material and also wanted to take on the then famous film star Leslie Howard, but the role of Duke Mantee was to get Warner's gangster actor number 1, Edward G. Robinson . Howard insisted on his stage partner's engagement, and the studio eventually gave way. The film The Petrified Forest was very successful and made Bogart a recognized film actor overnight. He got a multi-year contract with Warner Bros. and never forgot who he owed his breakthrough to. Leslie Howard died in the European theater of war in 1943 when his plane was shot down while on a troop support tour. Bogart later named his daughter Leslie Howard in thanks .

Bogart's success as a gangster cast led to numerous other roles of the same kind. He was shot many times, and ended up in prison or on death row. Jack Warner continuously employed Bogart, but showed no interest in making him a star and awarded the most interesting bets as heavy to colleagues such as Edward G. Robinson, James Cagney , Paul Muni or George Raft . A qualitative step forward for Bogart was the tragic lead role of the gangster in the film Decision in the Sierra by Raoul Walsh in 1941 ; here, too, Muni and Raft would have been first or second choice, but both had refused the role. Bogart also met John Huston , who wrote the script, while the film was being set. From then on, the two had a lifelong friendship.

The role of private detective "Sam Spade" in the film adaptation of Dashiell Hammett's crime thriller The Maltese Falcon was rejected by both James Cagney and George Raft. So in 1941 John Huston turned to Bogart for his film director debut . The trail of the falcon became style-defining and is considered the first representative of film noir . Success made Huston and Bogart stars of their guilds. For the actor, the hardened detective, who on the surface can hardly be distinguished from the gangsters, was an ideal transition from villain to hero. His opponents were Sydney Greenstreet , Peter Lorre and Elisha Cook Jr. , whereby the first two appeared several times in the following years in this constellation at Bogart.

In the following year, Bogart's first assignment as the protagonist of a romantic love story followed in Casablanca, which eventually became a cult film , at the side of Ingrid Bergman . Casablanca won the Oscar for “Best Picture” in 1943 , and Bogart received his first Oscar nomination.

In his roles, Bogart often played a chain smoker who usually put the cigarette out after a few puffs; the band Fraternity of Man referred to it in the 1968 song Don't Bogart (Me) .

Bogart then played alongside numerous routine productions in a number of classics, such as the Hemingway film version Have and Have Not (1944), the Chandler film version Big Sleep (1946), the Treasure of the Sierra Madre (1948) and in the same year - in addition to his old rival Edward G. Robinson - the opponent of the gangsters in Key Largo .

In 1949 he was able to make himself independent from Warners and founded his film company Santana Pictures Corporation . Seven full-length feature films were made by 1953. He did not act in two films himself.

Towards the end of his life, Bogart found great character roles in lavish productions. In 1952 he received the Oscar for best actor for his role in John Huston's classic adventure film African Queen alongside Katharine Hepburn. 1955 was followed by his final nomination for the portrayal of the psychotic captain in The Caine Was Fate .

In 1954 he was allowed to outdo his brother William Holden in Billy Wilder's romantic comedy Sabrina in courting for Audrey Hepburn, who was thirty years his junior . In 1955 Bogart was a - albeit a false - priest in The Left Hand of God . In the same year he took on a gangster role again for A day like everyone else . The drama Dirty Laurel (1956) about corruption in boxing was Bogart's last film.

Bogart was diagnosed with esophageal cancer in the mid-1950s . A major operation in January 1956 only had a palliative effect. Humphrey Bogart died on January 14, 1957 at the age of 57, emaciated to 36 kg. Bogart's ashes were to be scattered on the sea - according to his wishes - but this was not permitted. He was buried in the Forest Lawn Memorial Park in Glendale , California .

While Bogart was already a recognized character actor during his lifetime, from the 1960s onwards he gradually advanced to become a figure in global pop culture , which also appealed to subsequent generations of viewers. The character embodied by him of the lonely cynic in a trench coat, who steadfastly follows his moral code, acquired an iconic dimension - similar to the blonde embodied by Marilyn Monroe . In 1999 the American Film Institute voted Humphrey Bogart ahead of Cary Grant , James Stewart and Marlon Brando as the “greatest male American film star of all time”, thus confirming the actor's prominent importance in film history.

Numerous pop cultural allusions and references refer to Humphrey Bogart. In his comedy Mach's once again, Sam (1972), Woody Allen played a clumsy film critic who would like the coolness and masculinity of Bogart and who has hallucinatory "conversations" with him. The Austrian artist Gottfried Helnwein created a version of the famous painting Nighthawks by Edward Hopper , in which the nameless characters in the nightly bar were replaced by the pop culture icons Humphrey Bogart, Marilyn Monroe, James Dean and Elvis Presley .

After a marriage of little more than a year from 1926 to 1927 with the stage actress Helen Menken (1901-1966), Bogart married her colleague Mary Philips (1901-1975) in 1928 . The spirited actress Mary Philips, who, like Bogart, was not averse to alcohol, was not ready to give up her Broadway career and move to Hollywood with him after her husband's film success. The marriage ended in divorce in 1938.

In the same year Bogart married his colleague Mayo Methot (1904–1951), a soberly friendly woman who was drunk and tended to outbursts of anger and jealousy. The couple soon became known in Hollywood as the "arguing Bogarts". By the time of the divorce in 1945, they had been estranged for years.

In 1944 Bogart fell in love with his partner, Lauren Bacall (1924–2014), who was almost 25 years his junior while filming On To Have and Not . The two married in 1945. Bogart and Bacall had a marriage that is considered exemplary in Hollywood to this day. The couple also appeared together in four films. At the age of 49, Bogart first had a son, Stephen (* 1949), daughter Leslie followed in 1952.

Verita Thompson published a book in 1982 with the confession that she had been Bogart's lover for a few years. Thompson was his personal assistant for several years and also his hairstylist for some films (in the last years of his life, Bogart usually wore a toupee in films ).

The enthusiastic sailor found relaxation and distance - professionally and privately - on board his sailing yacht Santana . He named his film company Santana Pictures Corporation, founded in 1949, after her . 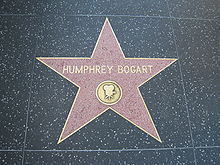 Humphrey Bogart's star on the Walk of Fame

In many of the German synchronized versions produced since the 1970s - including numerous re-dubbing - Humphrey Bogart was mostly spoken by Joachim Kemmer ; for example in Casablanca , decision in the Sierra or to have and not to have . In earlier dubbed versions of his films, Bogart was also featured by Wolfgang Lukschy ( e.g. Sabrina ), Paul Klinger (e.g. the first German dubbed version of Casablanca , Schach dem Teufel ), Erwin Linder (e.g. Die Maske runter ), Erich Ebert ( Black Legion secret society ) or OE Hasse (for example The Caine was her destiny ).