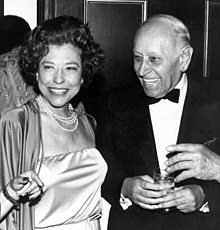 George Raft (born September 26, 1901 in New York City as George Ranft , † November 24, 1980 in Los Angeles , California ) was an American actor of German descent. He was one of the big stars of the gangster film of the 1930s and played in Scarface , Night Out and Some Like It Hot , among others . In keeping with his gangster characters on screen, he was also friends with New York bullies like Bugsy Siegel .

George Raft was born in 1901 - other sources also state in 1895 - as George Ranft in Washington Heights as the son of the German emigrants Eva Glockner and Conrad Ranft. His parents worked as dancers in New York nightclubs under poor conditions. George Raft spoke fluent German, which he had learned from his parents.

In his childhood he made friends with the later bullies Bugsy Siegel and Owney Madden , who grew up in the same criminal neighborhoods as him. The friendship between Siegel and Raft lasted a lifetime, so Raft made acquaintances in Hollywood and supported him with his popularity in court cases. In the 1950s, Raft opened the Capri Casino in Havana , together with Cosa Nostra head Meyer Lansky and mafia boss Santo Trafficante , which was initially financially successful. However, he lost it in 1959 due to the revolution in Cuba. In 1965, Raft was charged with tax evasion over financial problems. However, he got away with a suspended sentence because he pleaded guilty. In 1967, Great Britain banned him from entering the country because of his Mafia contacts.

In 1923 Raft married Grace Mulrooney, with whom he was married until her death in 1970. In fact, the marriage was broken long before her death, as Raft had affairs with other movie stars such as Betty Grable , Marlene Dietrich , Mae West and Norma Shearer . However, his wife was a strict Catholic and did not want to get a divorce, so the marriage lasted.

George Raft died of leukemia at the age of 79 and was buried in Forest Lawn Memorial Park .

Raft ran away from home at the age of 13. At a young age he tried his hand at boxing, nightclub dancer and taxi driver. In 1928 the relatively thin but handsome Raft went to Hollywood to try his luck in the film metropolis. In the first few years, however, he only got smaller roles. He made his breakthrough in 1932 with a major role in the classic film Scarface . In this film he played Guino Rinaldo, the aspiring gangster partner of Paul Muni , who is ultimately killed by this because of an affair with his sister. After Scarface, Raft cemented his reputation as a film star in the 1930s with crime and gangster films such as The Glass Key (1935), Fear of Death at Every Twilight (1939), and Night Out (1940), his position as a film star. In 1938 he played the leading male role in You and Me , directed by Fritz Lang . Raft was in the 1930s next to James Cagney and Edward G. Robinson as the most popular gangster actor in Hollywood.

Raft was described by colleagues as a very professional worker who knew his lines by heart before any other actor. After a misunderstanding when terminating a contract and because rumors said that he had his scripts read to him while studying, he was said to be illiterate . From a film-historical point of view, however, he missed numerous larger roles: He was initially the favorite for the leading roles in The Trail of the Falcon and Casablanca , rather by chance Raft's long-time co-star Humphrey Bogart , who achieved world fame through these roles, was hired. Raft also turned down the main role in Woman Without a Conscience .

From 1945 his popularity waned and from then on he was mostly seen as the leading actor in B-films , which were staged in the style of film noir . He also took on leading roles in several film projects in Europe. From the 1950s onwards he worked intensively as an actor on US television, in the meantime he even had his own TV series I'm the Law , which was discontinued after a short time. He made one of his still best-known film appearances in 1959 in Billy Wilder's classic comedy Some Like It Hot , where he parody of his usual roles as gang boss “Legaschen-Colombo”. Some like it hot one of Raft's last major film appearances became. In the 1960s and 1970s, the old star mostly had to be content with smaller roles in the style of cameo appearances . Raft's last film, Sam Marlow, Private Investigator , was released the year he died and was a tribute to his co-star Humphrey Bogart.

For his work, Raft received a star on the Hollywood Walk of Fame for his achievements in film (6150 Hollywood Boulevard) and another star for his career in television (1500 Vine St.).

In 1991 the biographical film Bugsy appeared on Bugsy Siegel, in which Joe Mantegna played George Raft in a supporting role. As early as 1962, with Raft's permission, the B-film The George Raft Story (known in Germany as: The Dancing Gangster ) came into the cinemas, which also processed his acquaintances with gangsters. In this film, directed by Joseph M. Newman , he was portrayed by Ray Danton , the female lead was played by Jayne Mansfield .