Edith Norma Shearer was born in Canada , after her siblings Douglas Shearer and Athole, as the youngest child of Andrew Shearer and Edith Fisher Shearer. In the early 1920s, Norma returned to America. The first contact with show business was made through a brother of the mother, who was the manager of a theater company and had connections to New York . The attempt to appear in the Ziegfield Follies of the Florenz Ziegfeld Jr. failed. Instead, Shearer occasionally worked as a model, for example as Miss Lotta Miles in a campaign for the Kelly-Springfield car tire brand. In later years this nickname for Shearer would take root among those in the film society who were not necessarily well-disposed towards her. Soon Norma Shearer played minor roles in films and quickly became a popular supporting actress. Encouraged by the success, she went to Hollywood in the early 1920s .

Producer Irving Thalberg saw Norma Shearer in her early recordings and introduced her to Louis B. Mayer , who gave her a five-year contract with the old metro studios in 1923. She starred in numerous films and quickly rose to become one of the stars of society. The actress grew in popularity especially after the surprise success of He Who Gets Slapped , where she appeared alongside Lon Chaney and John Gilbert under the direction of Victor Sjöström . In the internal hierarchy at MGM , to which Metro was merged with other companies in 1924, it was directly in third place after Marion Davies and Lillian Gish . The meteoric rise of Greta Garbo overshadowed Norma Shearer's ever-growing popularity.

In 1927 she married Irving Thalberg, who was then head of production at MGM, and her studio career took off. That was shown when the actress starred in the prestigious production of The Student Prince alongside Ramón Novarro , directed by Ernst Lubitsch . The studio wanted to build on the success of The Merry Widow with Mae Murray and John Gilbert , directed by Erich von Stroheim and La Boheme from the following year with Lillian Gish and John Gilbert, directed by King Vidor , which were previously available for full cinemas had taken care of.

With the beginning of the sound film era , the real heyday of the actress began. Irving Thalberg made sure that Shearer got the best roles and she soon carried the title Queen of MGM . Notorious for her ambition, she personally oversaw every detail while filming. With an iron discipline she got used to squinting in front of the camera and worked with the best cameramen in the studio on a special skylight that gave her flat face more contours. A make-up that was specially developed for her became famous, with which her skin looked almost alabaster-colored on the screen and was so light that it made special demands on the illumination of the other players. At the same time, she had every single still photo that was to be published of her personally presented for approval. Since Shearer thought she was not in a good shape, she was careful to cover her legs. During this time, Joan Crawford's bitterness over favoring Shearer also grew . When asked why Norma had become a star, even though she squinted so badly and had short legs and very broad hips, Crawford replied: Well, she sleeps with the boss .

Shearer, who in the silent film era had mostly played ladies of better society, was increasingly dissatisfied with her image with the rise of the talkie and also wanted to play in romantic melodramas like those with which Greta Garbo and Marlene Dietrich became famous. On the advice of Ramon Novarro, Shearer had himself photographed by the then completely unknown photographer George Hurrell in a series of lascivious and provocative poses. She was able to convince Thalberg to give her the role in The Woman for All , the film adaptation of a rather revealing novel about a newly divorced woman who has numerous affairs. Shearer won the Academy Award for Best Actress and then played mostly confident women with their own ideas about love and marriage. However, the actress made sure that she was not locked into one type of role. So she shot the film adaptation of Noël Coward's salon comedy Private Lives , the remake of Liebesleid , a sentimental love story that takes place on different time levels, and the adaptation of Eugene O'Neill's Strange Interlude . After Thalberg, whose poor health forced him to take a cure in Europe, returned to MGM in 1934, he gave his wife mostly roles in opulently filmed stage classics such as The Barretts of Wimpole Street , the greatest success of Broadway legend Katharine Cornell , or Romeo and Juliet . The film adaptation, however, did not meet the approval of the critics, who complained that Shearer was a bit mature for the role at 36 and that her partner Leslie Howard had already passed a critical age at 42.

Irving Thalberg died in 1936. In the following months, the actress was embroiled in a bitter dispute with Louis B. Mayer over the financial arrangements in Thalberg's will. The agreement came after a lot of negative publicity and provided, among other things, that the actress should make six more films for $ 150,000 each. In addition, she was entitled to a percentage of the income from the last Thalberg productions. 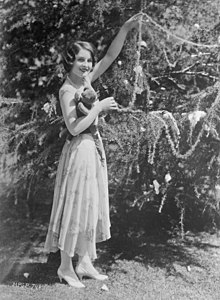 Norma Shearer then turned to her favorite production, the lavishly detailed biography of Marie-Antoinette , which was rented in 1938 and made less money than it had cost. Her most famous film today is The Women of 1939, the film adaptation of the Broadway hit of the same name and the second most commercially successful film of the year. Shearer and Joan Crawford didn't get along well, but this gives the scenes together an extra level of authenticity. Most critics disliked the portrayal of Miss Shearer and even compared her role to the roles that Ann Harding had always played. In the following, the actress turned down leading roles in Gone With the Wind , Susan and God and Mrs. Miniver and left the screen in 1942 after two financially unsuccessful comedies We Were Dancing and Her Cardboard Lover . She turned down offers for a long-term contract with Warner Brothers , which the actress wanted to use alongside Bette Davis in In Friendship . Contrary to popular rumors, the role of Norma Desmond in Sunset Boulevard was not based on Norma Shearer, but took on basic features of the character of Norma Talmadge .

In 1942 she met the ski instructor Marti Arrougé in Sun Valley . They married that same year and Norma Shearer retired from the big screen for good. She looked after her small family with the two children from her marriage to Irving Thalberg. Shearer remained in contact with MGM. So she discovered Janet Leigh while on a skiing holiday , for whom she arranged screen tests, which led to a contract with MGM.

A star on the Hollywood Walk of Fame at 6638 Hollywood Blvd.

According to the Academy's statutes, actors could be nominated for one or more films during the first three awards. In the case of Norma Shearer, however, the Oscar was only awarded for one film.