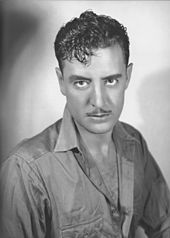 John Gilbert (actually John Cecil Pringle ; born July 10, 1897 in Logan , Utah , † January 9, 1936 in Los Angeles , California ) was an American film actor . He was one of the greatest stars of the late silent film era at the end of the 1920s , especially alongside Greta Garbo .

John Gilbert was the son of English traveling actors. He spent his childhood touring with his parents. He later attended a military school in California. In the 1910s he came to film and in 1915 received a job as an extra at the Triangle film company from Thomas Harper Ince . He made his film debut in 1916. At the same time he was also active as a writer and was hired by Maurice Tourneur as an actor, assistant director and screenwriter in 1919 . In 1921 Gilbert went to the Fox Film Corporation from William Fox and preferred to take on the roles of romantic lovers who shaped his image until the end of his career.

After moving to Metro Pictures Corporation , which merged into MGM a short time later , his rise to one of the most successful actors of the silent movie era began. His first big hit for the newly founded studio was in Victor Sjöström's He Who Gets Slapped , in which he appeared alongside Norma Shearer in 1924 . In the following year he had leading roles in two of the financially most successful productions of the decade: as Prince Danilo in The Merry Widow , where the leading actress Mae Murray and director Erich von Stroheim fought twelve weeks of volcanic outbursts of temperament during the shooting . An even bigger hit was King Vidor's World War I drama The Great Parade . In 1926 he played in Vidors La Bohème on the side of Lillian Gish and Lars Hanson . His popularity rose the following year when he first appeared with Greta Garbo in It Was by Clarence Brown . Gilbert and Garbo's collaboration continued in Anna Karenina , directed by Edmund Goulding, and in A Shameless Woman from the following year. Along with Ronald Colman / Vilma Bánky and Janet Gaynor / Charles Farrell , the two were one of the big screen couples of the era. At the height of his career, Gilbert was hailed as the successor to Valentino. Gilbert and Garbo also had a love affair in their private lives during this time.

Contrary to the rumors still circulating today, John Gilbert made the transition to sound film relatively easily. The actor negotiated a new contract in 1930 that earned him $ 250,000 each for four films, making Gilbert one of the highest paid stars alongside Constance Bennett and Al Jolson . What was fatal for him in the long run, however, were his sometimes violent differences of opinion with MGM boss Louis B. Mayer , which ultimately led to artistically less and less satisfying roles. Audience tastes had also changed, and with Clark Gable and Robert Montgomery the studio had two new top stars. Gilbert's best-known film today is Queen Christine from 1933, directed by Rouben Mamoulian , where he plays alongside Garbo, who expressly campaigned for his cast in the studio. In the following year he shot his last film. John Gilbert succumbed to a heart attack in 1936, presumably as a result of his longstanding excessive alcohol consumption. At the time it was planned to use him alongside Marlene Dietrich and Gary Cooper in Perlen, fortunately . After his death, his role was cast with John Halliday .