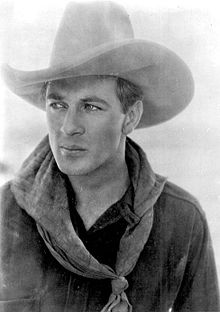 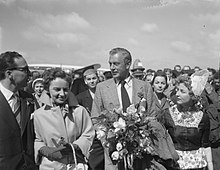 Frank James Cooper (born May 7, 1901 in Helena , Montana , USA , † May 13, 1961 in Beverly Hills , California ) was an American film actor . As a performer of straightforward, silent hero characters, Cooper was one of the most popular Hollywood stars from the 1930s until his death. He won the Oscar for Best Actor for the films Sergeant York (1941) and Noon (1952), in the latter western classic, he played perhaps his best-known role as Town Marshal Will Kane.

Gary Cooper first grew up in Montana, where his family belonged to the upper class . His parents were from England . The mother was the actress Alice Cooper (1873-1967), the father Charles Henry Cooper (1865-1946) was a judge at the Supreme Court of the US state of Montana, the Montana Supreme Court , and large farmers. For the purpose of social polish and higher education, the young Gary was sent to England with his older brother Arthur, where they attended Dunstable Grammar School in Bedfordshire from 1910 to 1913 . He himself said that he was beaten up in England for his American pronunciation and in the United States for his English accent. After returning to America, he attended Gallatin Valley High School in Bozeman and initially wanted to be a painter or caricaturist , which is why he took art courses at Montana State University at times . In a car accident at the age of 15, he broke his hip, which, especially in old age, gave him severe discomfort and the associated gait. He was advised to ride in order to hasten his recovery, which he perfected on the ranch at home.

Cooper graduated from Grinnell College in Iowa in the early 1920s . While he had some academic success as a painter, he was rejected by the university theater troupe. During his studies in the summer months of 1922 and 1923, he worked as a tourist guide in Yellowstone National Park . In February 1924 he suddenly dropped out of his art studies and returned to his native Montana, where he ran his parents' ranch and worked as a cartoonist for a local newspaper. In the fall of 1924, Cooper's father, who had finished his work on the Supreme Court, moved with his wife to Los Angeles, where he worked as an asset manager . Cooper followed his parents but couldn't find a lucrative job. He eventually met some film extras who told him about the Hollywood film industry .

Cooper made his first film in 1925, while the movie was still silent . He initially hired himself as an extra for five dollars a day , including in westerns with Jack Holt and Tom Mix . He played one of these unnamed roles as a Roman soldier in Ben Hur . Cooper made twice as much extra work - ten dollars a day - for his work as a stuntman in adventure films and westerns , but it was also far more dangerous. Cooper later described working as a stuntman as "hard and cruel". Eventually he took acting classes so he could leave the dangerous job of a stuntman behind and move on to the more lucrative acting jobs. Casting director Nan Collins, his agent, changed his client's name from Frank Cooper to Gary Cooper - other, more established actors also worked under the name Frank Cooper.

Collins 'and Cooper's efforts showed initial success, so that this first received more substantial roles - including in tricks as a film villain and in the short film Lightnin' Wins . In 1926, the tall, above-average-looking young actor was signed by producer Samuel Goldwyn , and in the same year he was mentioned for the first time in the credits for his appearance in The Winning of Barbara Worth . Cooper gained immediate popularity with the public and was signed by Paramount in 1926 , where he was seen in the Oscar-winning aviator film Wings Made of Steel . Cooper was able to establish himself as a new star as early as the late 1920s and was particularly popular in westerns. Many of his films have been huge box office hits. He played alongside Fay Wray in 1928 in The Legion of the Condemned and The First Kiss . By the end of the silent movie era, he was making almost $ 3,000 a week. Cooper is also mentioned in the lyrics of the song Puttin 'on the Ritz , published in 1929 .

At the end of the 1920s, there was a transition from silent film to sound film , which led to unprecedented upheavals in Hollywood: many silent film actors could not cope with the new sound film and quickly lost their popularity. Cooper, on the other hand, became even more popular because of its comparatively minimalist, realistic representation, which had nothing in common with the dramatic, gestural play of the silent film mimes. He kept his style of acting and used it effectively in western and adventure films in which he played silent, lonely heroes.

Cooper celebrated his breakthrough as a top star in Hollywood in 1929 in Victor Fleming's western The Man from Virginia . The man from Virginia , also Cooper's first sound film, was a great success at the time and had a lasting influence on the western genre. In the following year, Paramount Pictures used Cooper in many westerns and war films for commercial reasons, including: Only the Brave with Mary Brian , The Texan - again with Fay Wray, and The Spoilers with Kay Johnson . His 1930 best-known film is Josef von Sternberg's love drama Morocco , in which Cooper played a Foreign Legionnaire in France alongside Marlene Dietrich . For this performance he received - despite conflicts with the authoritarian director Sternberg - some of the best reviews of his acting career to date and increasingly he also shot in other genres, such as the romances I Take This Woman (1931) with Carole Lombard and His Woman (1931) with Claudette Colbert .

After starring ten film roles in two years, Cooper suffered from poor health and felt isolated from his sudden fame. From May 1931 he took a break and lived for a year in Algiers and later in Italy . He even took part in a ten-week big game hunt in the Mount Kenya massif in East Africa. During this time he lived with his befriended Princess Dorothy di Vrasso in the Villa Madama .

In 1932 Cooper returned to Paramount Pictures, but signed a new contract that provided for only two films a year - instead of five - 4,000 US dollars a week and extensive freedom in choosing roles. He was able to quickly build on his old successes with the war drama In Another Land (1932), a film adaptation of the novel of the same name by Ernest Hemingway (it was the first ever film adaptation of a Hemingway story). In what was perhaps his most ambitious role to date, he played a US soldier in Italy who lost his great love ( Helen Hayes ) in the turmoil of the First World War . In another country , it became one of the biggest film hits of the year with both audiences and critics. The following films - including Howard Hawks ' drama Today We Live and Ernst Lubitsch's comedy Serenade for Three - received only mixed popularity. It wasn't until 1934 that he was able to achieve success again with Now and Forever alongside child star Shirley Temple .

In 1935, Cooper was signed by producer Samuel Goldwyn , where he had one of his more demanding roles as an alcoholic writer in the drama The Wedding Night . The film, with the alleged "new Garbo " Anna Sten , was not a success. More satisfactory were his other films of the year, Peter Ibbetson and Bengali - both directed by Henry Hathaway . Bengali received six Oscar nominations and featured Cooper as a British officer defending his camp against Indian rebels. In 1936 he played the title role in Frank Capra's comedy Mr. Deeds Goes to Town . Cooper embodied the role of the naive greeting card writer Longfellow Deeds, who inherited a fortune in the millions and thus became the focus of intrigue. This film earned Cooper his first Oscar nomination and established his image as an American folk hero full of honesty and courage. His other films of the year were also successful, including the western The Hero of the Prairie , his first of four collaborations with star director Cecil B. DeMille . In the following years he played in lavish productions such as Shipwreck of Souls (1937) and The Adventures of Marco Polo (1938), and he also played an eccentric and married millionaire in Ernst Lubitsch's Bluebeard's Eighth Wife (1938).

After several financial failures, Cooper returned to westerns and war films in the late 1930s, for example with William A. Wellman's Three Foreign Legionaries (1939), which showed Cooper as a member of the French Foreign Legion. The following year, he starred in The Westerner , directed by William Wyler, as a cowboy cleaning up a corrupt small town. In 1941 Cooper worked again with director Capra on the film Here is John Doe , where he played a worn-out ex-athlete who, by chance, suddenly becomes America's folk hero. Cooper had an even greater success with the title role in the war drama Sergeant York , where he played the title role of the highly decorated soldier Alvin C. York . He received brilliant reviews for this performance and was awarded his first Oscar for Best Actor . His third success in 1941 was the screwball comedy The Strange Taming of the Gangster Bride Sugarpuss, starring Barbara Stanwyck , where he was directed by Howard Hawks as in Sergeant York . With the title role in Sam Wood's biopic The Great Throwing Over the Short Life of Baseball Star Lou Gehrig , Cooper's contract with producer Goldwyn ended in 1942.

Cooper was one of the most popular Hollywood stars until his death and was regularly successful at the box office. He made 110 films and has become an icon of American popular culture throughout his career . For many viewers, he embodied, in addition to his performance as an actor, the ideal image of the upright, honest , heroic American. 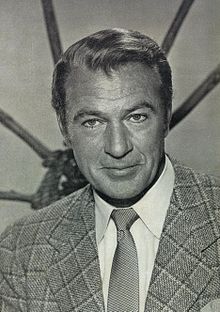 Cooper was awarded the Oscar three times : in 1942 for Sergeant York and in 1953 for twelve noon (High Noon) . He could no longer accept the honorary Oscar for his life's work (1961) because of his cancer , so that his friend James Stewart did it for him.

Gary Cooper was married from 1933 to Veronica "Rocky" Balfe (1913-2000) from New York High Society , with whom he had a daughter. Balfe had been an actress for a short time in the early 1930s under the pseudonym Sandra Shaw and was rudely tossed around by King Kong in King Kong and the white woman , among others . The mother and daughter were strictly Catholic , and the daughter initially wanted to become a nun . Cooper converted to the Catholic faith and for the sake of the two also visited the Pope towards the end of his life . Cooper was close friends with the writer Ernest Hemingway, who is said to have written the main character of his novel Whom the Hour Strikes for him.

During the filming of The Gallows Tree , he only got into the saddle with pain. With difficulty he was able to finish. They came to Cordura and who do not fear death . The diagnosis was prostate cancer , so that another collaboration with Fred Zinnemann in The Endless Horizon was out of the question. In the spring of 1960 he underwent two cancer operations. For the first time since the beginning of his career, no new films of his were shown in cinemas in 1960. After a brief recovery he began A man goes his way . However, the complaints returned.

Gary Cooper died in 1961 of complications from prostate cancer, which had now spread to the colon, lungs and bones. He is buried in the Sacred Hearts of Jesus & Mary Cemetery in Southampton on Long Island near New York . 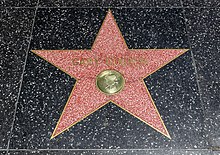 Gary Cooper's star on the Hollywood Walk of Fame