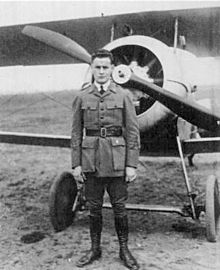 William A. Wellman during his war service in 1917

William Augustus Wellman (born February 29, 1896 in Brookline , Massachusetts , USA , † December 9, 1975 in Los Angeles , California ) was an American film director . From the 1920s to 1958 he directed a total of over 80 films, some of which are still considered classics today.

William Wellman came from a traditional East Coast family that goes back to the founders of the United States. One of his great-great-grandfathers was a signatory to the Declaration of Independence . After an eventful youth, during which he was even sentenced to a suspended sentence for theft, he joined the French Foreign Legion in the First World War . When the USA entered the war in 1917, he joined the American Air Force as a pilot and became a member of the legendary Lafayette Escadrille . After a crash and serious injuries, Wellman retired from the army. It was highly decorated and received, among other things, the Croix de Guerre and numerous other awards. After the war he hired himself as an aerobatic pilot and thus came into contact with the Hollywood film industry . He became a stunt flyer in Hollywood . His entry into the film business was strange: Wellman crashed his private plane into a barn on Douglas Fairbanks senior's ranch . from. He made his first film as an actor in 1919, but soon he was acting as a director for his first silent films .

Wellman first made some cheaply produced westerns with Buck Jones and the comedy The Boob with Joan Crawford in a supporting role, before hiring Paramount Pictures in 1927 for his experience with Wings , a story of daredevil aviators, two comrades and an amoral nurse. The film won the Academy Award for Best Picture at the 1929 Academy Awards . Roy Pomeroy also won in the "Best Technical Effects" category, which was only awarded this once, for staging the aerial combat scenes that set standards for the next few decades. Several pilots were killed during the shooting.

Wellman was now one of the first ranks of Hollywood directors and moved to Warner Brothers in 1931 , where he directed The Public Enemy with James Cagney and Jean Harlow , a classic of the gangster film . The scene in which Cagney Mae Clarke pushes half a grapefruit in the face became particularly popular. He first shot with Barbara Stanwyck later that year . Night Nurse showed Clark Gable as a gangster who hits Stanwyck directly in the face in one scene- With Stanwyck he should have other, partly successful films, including So Big and Lady of Burlesque , but partly artistically disappointing productions such as The Purchase Price . One of the most interesting films from the time is the melodrama Safe in Hell , a brutal story about a prostitute, played by silent film star Dorothy Mackaill , who assumes the guilt for a murder for her lover on a prison island with its own code of honor and is therefore executed in close-up. The film got a lot of trouble with the censor because of its open portrayal of violence and abuse, but it is now considered a good example of the Warner Brothers house style and of the “ pre-code ” film during the Great Depression. After the gangster film The Hatchet Man , which showed Edward G. Robinson as a murderous Chinese man who is almost destroyed by his love for Loretta Young , and two moderately successful films with Ruth Chatterton , Frisco Jenny and Lilly Turner , Wellman made some routine productions. With the exception of Gold Fever , which he shot on location in Alaska with Clark Gable and Loretta Young, his career was on the wane.

He did not make a comeback until 1937 when David O. Selznick gave him the direction of Ein Stern geht auf with Janet Gaynor and Fredric March . Wellman won the Oscar for Best Original Story and was also nominated for Best Director. That same year he was responsible for Whose Nothing Sacred , a screwball comedy starring Fredric March and Carole Lombard , which received over $ 18,000 a week for filming. In 1939 he had his most successful film to date, Beau Geste, on distribution. After a few artistically less successful films, Wellman returned in 1943 with Ritt zum Ox-Bow , a then thematically revolutionary western with Henry Fonda about lynching and a parable about fascist ways of thinking in the USA. Because of the commercially unpromising subject, Wellmann found it difficult to finance this dream project for a long time. The film was unsuccessful at the box office, but it earned the director widespread respect from the critics. His war film Schlachtgewitter am Monte Cassino made Robert Mitchum a star in 1945, and Kesselschlacht from 1949 gave MGM one of the biggest financial hits of the year. Wellman received his second nomination for best director for the gripping drama about GIs in a hopeless situation. He made five films with John Wayne in the 1950s , including Day Again , for which Wellman was nominated for the third Oscar for Best Director . Wellman's last film was Lafayette Escadrille from 1958, in which he celebrated his squadron from the First World War.

Wellman was notorious for his outbursts of anger on set and his arguments with Hollywood stars. For example, in 1933 he had a fist fight with Spencer Tracy over Loretta Young , whom Wellman had fallen in love with, but who was with Tracy. His skirmishes with Janet Gaynor overshadowed the filming of Small Town Girl, and Wellman was nicknamed Wild Bill Wellman for good reason . Wellman was their fourth marriage in 1933 to 18-year-old Dorothy Coonan, who had starred in his film Wild Boys of the Road that same year . The couple had seven children. The actress Louise Brooks wrote in her collection of essays Lulu in Hollywood very kindly and respectfully about the filming with Wellman on the silent film Beggars of Life .

Wellman wrote his memoir A Short Time for Insanity in 1947 and published a second volume of Memoirs Growing Old Disgracefully shortly before his death .