Carole Lombard (* 6. October 1908 as Jane Alice Peters in Fort Wayne , Indiana ; † 16th January 1942 at Potosi Mountain , Nevada ) was an American actress . She became famous for her roles in screwball comedies in the 1930s . When she died in a plane crash, she was one of Hollywood's biggest and highest-paid stars. The American Film Institute named Lombard one of America's 25 Greatest Female Film Legends.

Carole Lombard was born as the youngest of three children of Frederick Christian Peters (1875-1935) and Elizabeth Jayne (Knight) Peters (1876-1942) in affluent circumstances. When she was eight years old, her parents separated. She moved to the Los Angeles area with her siblings and mother. While attending high school, Lombard, who also proved herself to be a talented athlete during her school days, was discovered by film director Allan Dwan . Dwan gave her a role in his 1921 film A Perfect Crime . Initially mainly used in smaller roles, she signed a studio contract with Fox Film Corporation in 1924 at the age of 16 , where Lombard quickly rose to become the leading lady . After a car accident left a scar on Lombard, her expiring contract with Fox was not renewed. So she moved to Studio Pathé Exchange, where she appeared in 15 short films between September 1927 and March 1929 and was also able to demonstrate her comedic talent.

The transition from silent film to sound film did not cause her any problems. She starred alongside Warner Baxter in The Arizona Kid in 1930 and was signed to Paramount Pictures that same year . There she was first cast alongside Charles Rogers in the comedy Safety in Numbers . In the following years, Lombard embodied a wide variety of roles, from society women to prostitutes and college students to adulteresses, but without making the breakthrough into the series of top stars. William Powell was her partner in Man of the World and Ladies' Man , among others, and the two married in June 1931. Powell and Lombard remained on friendly terms after their divorce in 1933. Lombard met her second husband in 1932 when she appeared alongside Clark Gable in No Man of Her Own . Her appearance at the side of George Raft in Bolero in 1934 put Lombard's dancing skills in the foreground. She made her breakthrough into the ranks of leading Hollywood stars at Columbia Pictures in Napoleon from Broadway , the film adaptation of a Broadway hit, in which she appeared alongside John Barrymore in the role of an aspiring Hollywood star. In the following years , Carole Lombard established himself as a star in numerous screwball comedies , including Mitchell Leisen's Love in the blink of an eye from 1935 and William K. Howard's A Princess for America from the following year. In both films she played alongside Fred MacMurray , with whom she was to make a total of four films.

In her comedies, Lombard specialized in the portrayal of neurotic, unconventional and spirited women, for example as the spoiled daughter of a wealthy family in Gregory La Cava's comedy Mein Mann Godfrey , where she was used alongside William Powell. At the 1937 Academy Awards , Lombard received her only Academy Award nomination for Best Actress for My Husband Godfrey . After her studio contract with Paramount expired, Lombard decided, following the example of Irene Dunne and Janet Gaynor , not to enter into long-term contractual relationships with a single studio and was subsequently able to conclude financially lucrative contracts, thanks to which she had an annual income of over 465,000 US dollars in 1937 highest paid female actress in the country. They demanded and received per film to $ 150,000 salary, including for her appearance in of David O. Selznick produced comedy Nothing Sacred 1937, in the Lombard next to Fredric March , directed by William A. Wellman as allegedly terminally ill woman appeared whose fate is cannibalized by newspapers as a media sensation. The film was shot in 3-color Technicolor , which was still new at the time . However, Lombard increasingly wanted to be perceived as a dramatic actress and tried from 1939 to change into more demanding roles. At the side of Cary Grant and her good friend Kay Francis , she took on the lead role of a widow in 1939 Nur in Name . Other films with Lombard in more serious roles during this period included her appearance alongside James Stewart in John Cromwell's drama An Ideal Couple , which was also released in 1939, and her role as a nurse in Vigil in the Night of 1940.

In 1939 she married Clark Gable, whom she had known since the joint film No Man of Her Own . The marriage ended in 1942 with Lombard's death. The actress had a long friendship with the director Alfred Hitchcock and his wife Alma . In response to Hitchcock's sarcastic remark that actors are actually like cattle, she had three cows marched on the set with the names of the three main characters on them while filming Mr. and Mrs. Smith in 1941 . The comedy marriage of Mr. and Mrs. Smith marked Lombard's return to the screwball genre. Her last film, To Be or Not to Be , directed by Ernst Lubitsch and alongside Jack Benny , was a satire about National Socialism and the Second World War. It was posthumously distributed and initially received mixed reviews, but is now considered one of Lubitsch's best films. Shortly before her death, she was earmarked for One Kiss Too Many. The role was later taken on by Joan Crawford .

The actress was killed in an accident on January 16, 1942 at the age of 33 in the crash of Transcontinental and Western Air Flight 3 . She had been on a tour that also advertised war bonds, totaling more than $ 2 million. The machine, which was almost seven miles off course, crashed into a mountain flank 25 meters below the summit of Potosi Mountain, one of the highest mountains in Nevada, that evening. It slipped into a ravine, broke, and went up in flames. All 22 people on board were killed, including Lombard, her mother and her press agent. The investigation report stated that the cause of the accident was a pilot's error. The plane crash, but in particular Lombard's death, caused a sensation. On the occasion of her death, US President Franklin D. Roosevelt said:

“She brought great joy to everyone who knew her and to millions who only knew her as a great artist. She selflessly gave time and talent to serve her government in peace and war. She loved her country. She is and will always be a star that we should never forget and always be grateful for. "

The actress, who adopted the Baha'i faith in 1938 and was childless, was buried with her mother in the Forest Lawn Memorial Park in Glendale . Clark Gable was deeply shaken by the death of his wife, and although he later married twice, he was buried next to Lombard at his request in 1960. 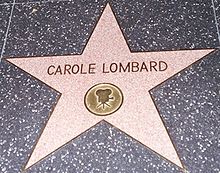 Carole Lombard's star on the Hollywood Walk of Fame

At the turn of the millennium, the American Film Institute voted her the 23rd greatest female American film star of all time. Shortly after her death, the Liberty freighter SS Carole Lombard was named after her, and there is also the Carole Lombard Memorial Bridge in her native Fort Wayne.