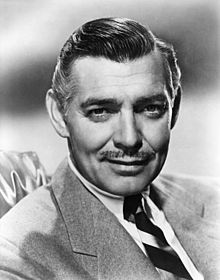 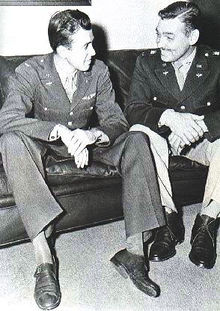 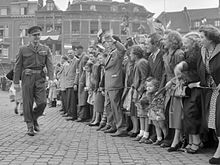 Clark Gable in Holland in 1953 ( betrayed during the filming )

Clark Gable was born to Henry “Will” Gable (1870–1948) and his wife Adeline Hershelman (1869–1901). After his mother's early death, he grew up with relatives in Pennsylvania. He was expelled from high school at sixteen and got by doing odd jobs until he saw a touring theater performance. After this impression, Gable decided to become an actor. The theater manager Josephine Dillon, who later became his first wife, finally brought him to Hollywood in 1924 , where he initially hired himself as an extra.

Gable had one of his first appearances in 1925 in The Merry Widow by Erich von Stroheim . In the following years, however, he had to be content with small roles.

His rise in film began in early 1931 in a supporting role in the western The Painted Desert with William Boyd and Helen Twelvetrees ; in the same year Gable got a studio contract with MGM . He appeared in eight other films in 1931 and by the end of the year was already one of Hollywood's ten biggest box office stars. In this early phase, Gable was mostly seen as a daredevil or gangster who treated women roughly, sometimes brutally: In Night Nurse he hits Barbara Stanwyck in the face, Norma Shearer is treated badly by Gable in Der Mut zum Glück as a well-behaved daughter of better society and in Helga's fall and rise he threw a prostitute down the stairs.

In 1932 he appeared for the second time alongside Jean Harlow after the two had supporting roles in the twisting gangster flick The Secret Six the previous year. The two were a profitable duo in the film Jungle in the Storm , which was originally to be filmed with Greta Garbo in the lead role. When Harlow became embroiled in a scandal while filming, MGM briefly considered replacing her with Tallulah Bankhead . Gable starred eight times with Joan Crawford and seven times with Myrna Loy during the 1930s . He played twice each alongside Helen Hayes , Constance Bennett , Marion Davies and a total of three times alongside Norma Shearer. In 1934 he was loaned to Columbia Pictures, not entirely of his own volition, to star in the troubled production of a runaway heiress and a bus. He played there alongside Claudette Colbert , who had also only accepted the role by doubling her fee, in Frank Capra's It Happened in One Night . Gable received the Oscar for Best Actor at the 1935 Academy Awards . At the Academy Awards in 1936 he was nominated again for the Oscar for Best Actor for his impersonation of the naval officer Fletcher Christian in Mutiny on the Bounty . In 1937 he was voted "King of Hollywood" by listeners to a popular radio show, with Myrna Loy as "Queen".

Clark Gable as a member of the 8th Air Force in Great Britain, 1943

In 1939, Gable took on the role of Rhett Butler in Gone With the Wind . According to consensus, Gable was one of the initiators for the replacement of George Cukor as the responsible director and his replacement by Victor Fleming after a third of the shooting. The film won ten Academy Awards, and at the end of the film Gable utters the famous line Frankly, my dear, I Don't Give a Damn , which was voted the most important US film quote ever by the American Film Institute . Gable himself was nominated for Best Leading Role, but lost to Robert Donat in Goodbye, Mr. Chips . After the death of his third wife, Carole Lombard, Gable signed up for service with the 8th Air Force of the United States Army Air Forces in Great Britain, where he participated in five missions as an observer / gunner in a B-17 . He stayed there until the end of the war in 1945 and left the USAAF with the rank of major .

After returning to the MGM, he made a number of minor films. Man without a Heart showed him at the side of Greer Garson in a melodrama about a librarian, a girl with an easy lifestyle and a die-hard reporter. Despite the slogan Gable's back and Garson got him , the film fell short of expectations at the box office. For a long time Gable could not build on his old successes. At the time, he was often seen alongside Ava Gardner or Lana Turner in unsuccessful attempts to duplicate the chemistry of the Gable-Harlow team. In 1954, after a change of director, he left the MGM studio and worked as a freelance actor. The best-known films of this time include the financially successful 1955 western Drei Rivalen and the 1958 Doris Day comedy Reporter der Liebe .

In 1960 his career reached a final climax with the film Misfits - Not Sociable . Gable starred here alongside Marilyn Monroe , directed by John Huston based on a book by Monroe's husband, the writer Arthur Miller . During the chaotic filming with constant script changes, the actor, who was in principle precisely prepared for his role, often complained to his long-time friend Joan Crawford about the major mental problems caused by the depressive moods of Monroe and Montgomery Clift , which meant that both were either delayed or not appeared on the set, and the resulting waiting times of hours and days. Gable himself considered his portrayal of an aging cowboy in the film to be his best performance since Gone With the Wind .

His German dubbing voice was often Siegfried Schürenberg , including in Gone with the Wind .

Clark Gable was hospitalized shortly after finishing work on Misfits , which came posthumously in November 1960, after a serious heart attack , where he suffered a second heart attack, from which he died. He was 59 years old.

From 1924 to 1930 he was married to the actress Josephine Dillon (1884–1971), who also gave him acting lessons and helped him to get his first roles. In 1931 he married Maria Langham, with whom he remained married until 1939. In the same year he married his third wife, the actress Carole Lombard , who died in a plane crash in 1942 while on a tour to sell war bonds. From 1949 to 1952 he was married to the British society lady Sylvia Ashley (1904–1977). In 1955 he married the actress Kay Spreckels (1916–1983), his fifth and last wife. His son John Clark Gable from his marriage to Kay Spreckels was born after his death in March 1961. His daughter Judy Lewis from a relationship with Loretta Young was never officially recognized by him and only found out years later who her birth father was.

Gable was buried next to his third wife, Carole Lombard , in the Great Mausoleum in Forest Lawn Memorial Park . A star on the Hollywood Walk of Fame at 1610 Vine Street commemorates him. Gable was a member of the Freemasons Association (Beverly Hills Lodge No. 528).