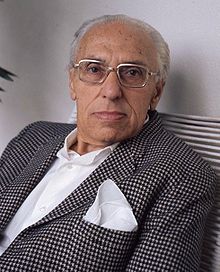 George Cukor was born in New York in 1899 to Victor and Helen Cukor, Jewish - Hungarian immigrants. Named after the well-known US Admiral George Dewey , he grew up with his older sister Elise in his hometown and was fascinated by the theater from an early age. After graduating from De Witt Clinton High School in 1916 and a year in the Students Army Training Corps, he began his career in 1918 as an assistant director at a theater in Chicago. In the 1920s he was a successful Broadway director and he invented the out-of-town try-outs , with Broadway productions first tried out in front of audiences in other cities and only then premiered on Broadway. During this time he also made the acquaintance of the then still unknown Bette Davis , who did not forgive him throughout her life for not hiring her for a production in the touring theater for the benefit of Miriam Hopkins (English: "summer stock"). Cukor worked with stage stars like Jeanne Eagels , Laurette Taylor and Ethel Barrymore .

In 1929 he joined the caravan of Broadway actors who were given new opportunities in Hollywood with the rise of talkies . He got his first engagement as a language teacher for the actors of In the West nothing new , only to take over the co-direction of three films shortly afterwards. At that time he made the acquaintance of David O. Selznick , who helped him get a contract with Paramount . He made his director's debut in Tarnished Lady with Tallulah Bankhead . His collaboration with Kay Francis in Girls About Town is now considered one of the best pre-code films with its daring dialogues and ambiguous situations. A year later, while filming One Hour with Dir, he fell out with Ernst Lubitsch , who ultimately took over the direction and thus not only saved the career of Maurice Chevalier , but also brought musicals back into fashion after an oversupply of the genre on one The low point of audience approval had dropped. It was again Selznick who got Cukor a new contract with RKO , where Selznick worked as executive producer. Within a year, Cukor became one of the industry's best-known directors after not only singing Constance Bennett for her best performance in What Price Hollywood? The original version for all subsequent A-Star-is-Born remakes, but also Katharine Hepburn in her debut A Divorce . The film dealt sensitively with the issue of birth control and mental illness. John Barrymore offered one of his best portrayals as a man who had lived in a mental hospital for years and reappeared with the family a few days before his former wife's second wedding.

Cukor became well known in the following year when he not only saved RKO from bankruptcy with the literary film Four Sisters , but also set the trend for filming classics for the next decade. The history of the known novel by Louisa May Alcott about a family during the American Civil War, contained a famous Katherine Hepburn's characters. Later that year, Cukor and Selznick went to MGM , where he was immediately given the task of filming a successor to the previous year's success of Menschen im Hotel . Based on a well-known Broadway play, Dinner at eight became one of the studio's greatest financial achievements in a year when the Great Depression was at its height. Over the next few years, Cukor was a specialist in elaborately produced, but mostly somewhat stiff adaptations of classics. While David Copperfield was still being praised by the critics, opinions on Romeo and Juliet were divided, which was probably also due to the fact that the leading actors were already 42 ( Leslie Howard ) and 36 years ( Norma Shearer ). However, the film adaptation of The Lady of the Camellias , which was based on Alexandre Dumas ' play of the same name , was an unqualified success, which was primarily due to Greta Garbo , who gave her best and most controlled performance here. In 1938, Cukor shot The Bride's Sister , based on a company piece by Philip Barry , his first screwball comedy , which was popular with critics and rather unsuccessful with audiences.

Selznick, who had meanwhile founded his own production company, Selznick International , commissioned Cukor to direct Gone With the Wind in 1939 , but Selznick was not satisfied with the finished samples, although these scenes were later used in the finished film. In addition, Cukor did not get along with Clark Gable , who ended up getting his friend Victor Fleming through as a director. However, during the filming, Cukor is said to have continued to exchange ideas with the leading actresses Vivien Leigh and Olivia de Havilland about the conception of their roles. Immediately after being kicked out of Selznick, MGM gave Cukor the direction of The Women and had to deal with the arguments between rival stars Norma Shearer and Joan Crawford . The film became one of MGM's most expensive productions, but it ended up grossing almost as much as Gone with the Wind . Cukor's reputation for getting good performances out of women in particular was confirmed again with the next few films. The critically acclaimed comedy Night Before the Wedding (1940) turned out to be one of his greatest hits, saving Katharine Hepburn's film career and earning James Stewart an Oscar. He also succeeded in revitalizing Joan Crawford's stagnant career with two substantial roles: in Susan und der liebe Gott , Crawford played an exalted matron and mother of an adolescent daughter. A year later, she was in The Woman with the Scar , the remake of the film En Kvinnas Ansktionen with Ingrid Bergman , as a woman with a scar on her face who hates the world. Crawford admitted that not being nominated for an Oscar for the role was the biggest disappointment of her life . His subsequent films The Woman with Two Faces and Her Cardboard Lover were financial failures that also ended the careers of their leading actresses Greta Garbo and Norma Shearer forever. In the 1940s, Cukor turned increasingly to psychological subjects. Under his direction, Ingrid Bergman won in 1945 for her appearance in the claustrophobic Das Haus der Lady Alquist as the seemingly insane wife of Charles Boyer and Ronald Colman as the murderous theater actor in Ein Doppelleben 1948 each the Oscar for best actress and leading actor. From the late 1940s onwards, Cukor made some of the best films by Judy Holliday , who won an Oscar for best actress in 1951 with Die ist nicht von Yesterday, a complete surprise. 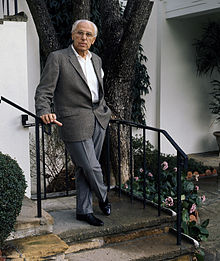 In 1954 he turned A New Star in the Sky with Judy Garland in the lead role, which was a great success, but left Cukor rather dissatisfied because the film studio had significantly shortened its original version. In the following years the success of Cukor's film projects changed. While the musical Die Girls was well received in 1957, the unusual western The Lady and the Killer - Cukor's only production in this genre - and the Marilyn Monroe comedy Let's Make It Love To Flops developed in 1960 . In 1962, Cukor shot again with Monroe on the comedy Something's Got to Give , a remake of My Favorite Woman from 1940. However, Monroe's private problems prevented it from being completed, so the film remained unfinished. A later high point in his career was the film adaptation of My Fair Lady with Audrey Hepburn and Rex Harrison , which won no fewer than eight Academy Awards, one of which Cukor received for Best Director . He then reduced his shooting workload. In his late work he shot the comedy Traveling with My Aunt with Maggie Smith and two award-winning television films with his old friend Katharine Hepburn. In 1976 he directed the fairy tale film The Blue Bird , the first and only co-production between the USA and the Soviet Union during the Cold War.

His last film, Die Wildeichen, starring Jacqueline Bisset and Candice Bergen , appeared in 1981 at the age of 82 . George Cukor died of a heart attack in January 1983. A star on the Hollywood Walk of Fame (6378 Hollywood Boulevard) commemorates the director .

In the US television series Hollywood from 2020 about homophobia , racism and sexism in the dream factory in the 1940s, which, however, reserves a number of artistic freedoms, Cukor is embodied in a supporting role by actor Daniel London .

Right from the start, Cukor had a reputation for getting the actors to control and mature performances. Ingrid Bergman ( Lady Alquist's House ), Ronald Colman ( A Double Life ) and Judy Holliday ( She's not from yesterday ) won Oscars under his direction and many other actors were nominated. Most of his productions were closely related to the theater and almost all of his material was based on stage plays, and he almost never realized any original scripts. For Cukor, the dialogues and the actors were the most important factors for a successful film. The statics show themselves well in Das Haus der Lady Alquist and Ein Doppelleben , both of which stay very close to the stage models. Cukor only rarely used special techniques; the camera work is often static and not very mobile. He also preferred studio recordings that met his preference for long takes, i.e. recordings. Cukor made this aware: In his conversations with Peter Bogdanovich he said that a discreet camera work that was as unconscious as possible for the viewer was the best.

During his time at MGM, he was the leading women director alongside Clarence Brown and Robert Z. Leonard . The explanation given for Cukor's good working relationship with actresses is the fact that he was homosexual . He is said to have identified with the actresses and their roles, and in addition, there was no climate of sexual coercion at the filming locations. Louise Brooks, however, vehemently denies this theory in her collection of essays Lulu in Hollywood , citing Victor Fleming as a counter-example , whom she considered to be the more talented “woman director”.