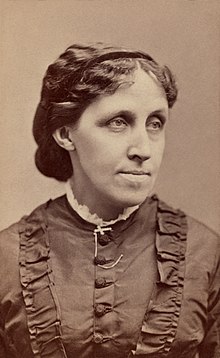 Louisa May Alcott (born November 29, 1832 in Germantown , Pennsylvania , † March 6, 1888 in Roxbury , Massachusetts ) was an American writer . She became famous worldwide as the author of the children's book tetralogy Little Women , which is based on childhood experiences with her three sisters.

Lousia May Alcott's parents were Abigail May Alcott, who campaigned for the abolition of slavery , and Amos Bronson Alcott , educator and avowed transcendentalist . She was born in Germantown in 1832, the second of four daughters . In 1834 the Alcotts moved to Boston , where Elizabeth Sewall Alcott, the third daughter of the family, was born. Amos Bronson helped found the experimental Temple School there and joined the Transcendental Club with Ralph Waldo Emerson and Henry David Thoreau .

Louisa Alcott lived in poverty from early childhood, on the one hand because it was in line with her father's anti-materialist attitudes, but also because he could not handle money. As a result of the failure of Amos' school model, the family had to move again in 1840, this time to Concord , Massachusetts . In 1843 the family was temporarily housed in Fruitlands , a transcendental institution. After another stop in rented rooms, the Alcotts finally bought a house in Concord from their mother's inheritance and with the help of Emerson, who became a good friend of the family.

Amos taught his daughters at home, but the children learned a lot from the family's many friends, such as Emerson, whose library they were allowed to rummage through, Thoreau, with whom they explored nature and the surrounding area, Nathaniel Hawthorne and Margaret Fuller . Louisa recorded the experiences of the Fruitlands period in Transcendental Wild Oats , published in Silver Pitchers , 1876.

Louisa developed a passion for writing at an early age. She regularly turned her imagination into melodramatic plays, which she staged for friends with her sisters. Louisa herself especially liked to play the wild roles - bandits, villains, robbers - like her heroine Jo from Little Women .

Dissatisfied with the poor living conditions of her family, Louisa vowed to get rich at the age of 15. Since society did not offer women looking for work many opportunities, she took every job and worked, among other things, as a teacher, housekeeper and seamstress, experiences that she processed in Work: A Story of Experience in 1873 . Her career as a writer was also based on her will to be able to support her family financially. At first, poems and short stories appeared in popular magazines, then in 1854 she published her first book, Flower Fabels , which contained fairy tales for Emerson's daughter Ellen.

1856 was a year of change for the family. First Louisa's younger sister Elizabeth, the model for the character of Beth in Little Women , died of scarlet fever , then her older sister Anna married. Some time later, Louisa began for The Atlantic Monthly to write and went in 1862 volunteered as a nurse in the Civil War to Georgetown . Since she contracted typhus there , she had to quit her job after just six weeks. The consequences of her treatment with mercury accompanied her until the end of her life. Her letters from this period form the basis of her work, Hospital Sketches , published in 1863, which Louisa first introduced to a wider audience.

She also published various horror and horror novels under the pseudonym A. M. Barnard , such as A Long Fatal Love Chase or Pauline's Passion and Punishment . This side of Louisa can also be found in Jo from Little Women .

Like her mother, she began campaigning for women's rights and the right to vote and was committed to the abolition of slavery .

The writer's home in Concord (Mass.) 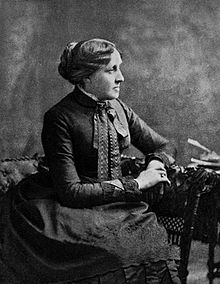 At the suggestion of her editor Thomas Niles, Louisa May Alcott published the first volume of Little Women in 1868 , with which she achieved her big breakthrough. The novel is based on experiences with her sisters during their childhood in Concord. Good Wives , the second novel about the girls of the March family, followed in 1869 . Over the years, Little Men and Jo's Boys added to the March family saga . Little Men is based on her experiences with her nephews, who lived with her at Orchard House in Concord. Her other novels and stories also followed the style of Little Women and were widely received.

Louisa's mother Abigail died in 1877 and her youngest sister May married a year later. May's daughter Louisa “Lulu” May had lived with Louisa May Alcott in Boston since her mother's death in 1879, where she, among others, Jo's Boys , Lulu's Library and A Garland for Girls composed. Along with Elizabeth Drew Stoddard , Rebecca Harding Davis and Anne Moncure Crane, she was a member of a group of women writers who campaigned for women's rights during the Gilded Age . She was also the first woman to register as a voter in Concord.

Despite her deteriorating health from mercury poisoning, she never stopped writing. Two days after visiting her father on his deathbed, she herself died of a stroke on March 6, 1888, at the age of 55.

The Little Women books, in which Alcott wrote about the lives of sisters Jo, Beth, Meg and Amy March, are among the most successful books for young people in English-language literature . They have been translated into 27 languages ​​and have been reissued continuously to this day. Little Women (German title: Betty and her sisters) was the first literature for adolescent girls in the English-speaking world. In these books Alcott glorifies family life and the “female desires” for husband and family, but at the same time she managed to convey her own, more liberal attitude and desire for independence. In the last volume of the tetralogy, Jo's Boys , she explicitly advocates the possibility for women not to marry and pursue a permanent job, which was quite unusual for the 19th century.

In addition to her children's books, Alcott also wrote adult entertainment novels and poetry. In newspaper articles and essays, she presented the situation of women in the United States of the 19th century in an unadulterated and objective manner and criticized not only the attitudes but also the sexual morals of the time.

Under the lilac bush

From the world of boys