John Barrymore (actually John Sidney Blyth ; born February 14, 1882 in Philadelphia , Pennsylvania , † May 29, 1942 in Los Angeles , California ) was an American actor who in the first decades of the 20th century was one of the most successful and respected US actors mattered. After gaining fame as a stage actor on Broadway , he became a Hollywood star in the 1920s and 1930s.

John Barrymore was the third son of the American theater actor couple Maurice Barrymore (actually: John Sidney Blyth) and Georgie Drew. After his brother Lionel Barrymore (1878-1954) and his sister Ethel Barrymore (1879-1959) he was the youngest of the famous Fabulous Barrymore . All three siblings were to become well-known stage and film actors.

John Barrymore made his theatrical debut in 1903 in the play Magda . He soon became one of the most famous stage actors of his time thanks to successes in plays such as The Affairs of Anatol , Peter Ibbetson and Redemption . He reached the peak of his stage career in the early 1920s with appearances in Richard III. and as Hamlet by William Shakespeare . He was then known as the Perfect Profile and was considered the man with the most beautiful voice in the world. His nickname, The Great Lover , referred to both his success as a performer of romantic heroes and his countless affairs. Barrymore had already appeared in a film for the first time in 1913 and had a great success in Dr. Jekyll and Mr. Hyde directed by John S. Robertson celebrate. In the middle of the decade he signed a very lucrative contract with Warner Brothers , who for the first time in 1926 put individual passages of the film on an extra sound carrier with dialogues for his film Don Juan . The success of the project led to further investments by the studio in the development of the sound film . The advent of the new medium helped the actor to start a new career, as he was now able to use his famous sonorous voice effectively. 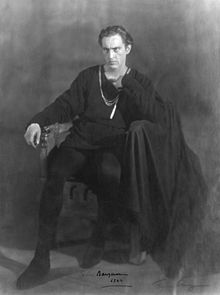 From this point on, Barrymore mainly worked as a film actor. Irving Thalberg lured the actor to MGM for a fee of up to 150,000 dollars and managed to get all three siblings in front of the camera for the drama Rasputin: The Demon of Russia in 1932 . That same year, Barrymore appeared alongside Greta Garbo , Joan Crawford, and Wallace Beery in People at the Hotel , the first production with a star cast . In late 1932, John Barrymore starred alongside Katharine Hepburn in A Divorce , where Hepburn made her screen debut. Barrymore plays a man who spends years in the sanatorium due to a mental illness and reappears on his daughter's wedding day. He had a completely different role in Topaze as a charming cheater who plans a coup with his lover, played by Myrna Loy . David O. Selznick , the producer of Topaze , gave Barrymore two good roles the following year; on the one hand in dinner at eight next to Marie Dressler and Jean Harlow and in Nachtflug , where he worked alongside Clark Gable and Helen Hayes . In 1934, John Barrymore made one of the earliest screwball comedies with Napoleon from Broadway, directed by Howard Hawks .

John Barrymore was then mainly seen in supporting roles, so he worked in 1936 in George Cukor's Romeo and Juliet as Mercutio and in 1938 in Marie-Antoinette as Louis XV. With. In the years that followed, Barrymore's longstanding alcoholism made itself felt more and more professionally, so that his roles became increasingly difficult. After appearing as the eccentric count in the 1939 comedy Unveiling at Midnight , his last A-production, John Barrymore only played in second-rate films like The Great Profile (1940) and Playmates (1941), which exploited his former fame, until his death and mostly portrayed him as a caricature of himself. This is one of the reasons why he turned increasingly to the theater again in his life.

John Barrymore died of a heart attack in 1942 at the age of 60 while preparing to make a self-deprecating appearance on a Rudy Vallée radio show . At this point, Barrymore's public image was at a low point and his tumultuous personal life was frequently the subject of gossip magazines. The actor was married four times: from 1910 to 1917 with the actress Katherine Corri Harris (1890-1927), from 1920 to 1928 with the actress and author Blanche Oelrichs , from 1928 to 1934 with the equally famous film actress Dolores Costello and from 1936 to 1940 with actress Elaine Barrie (1915–2003). All marriages ended in divorce. He had three children: Diana Barrymore (1921-1960), Dolores Ethel Mae Barrymore (* 1930) and John Drew Barrymore (1932-2004), whose daughter - and thus John Barrymore's granddaughter - Drew Barrymore is also an actress. 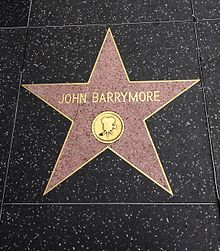 John Barrymore's star on the Hollywood Walk of Fame

His daughter Diana Barrymore , who suffered from alcoholism herself, described her father in her own biography Too Much, Too Soon from 1957 as a manipulative, morbid egomaniac. In the film adaptation of the same name from 1958 (which came into the cinemas in Germany when your life was a scandal ), Errol Flynn , at that time already marked by alcohol addiction, took over the part of John Barrymore.

George Simon Kaufman parodied Barrymore in his very successful comedy The Royal Family (1927), in Paul Rudnick's play I Hate Hamlet (1991) the actor appears as a ghost. For his portrayal of old John Barrymore in William Luce's play Barrymore , Christopher Plummer won the 1997 Tony Award for Best Actor . Plummer played this role again in 2011 in the film adaptation of the play.