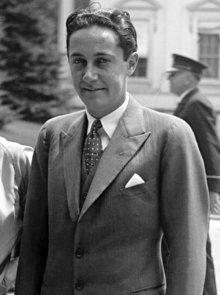 Irving Thalberg (born May 30, 1899 in Brooklyn , New York , † September 14, 1936 in Santa Monica , California ) was an American film producer , who in his short life worked for many commercially and artistically successful productions at Metro-Goldwyn-Mayer was responsible.

Thalberg was born in Brooklyn, New York, as the son of German-Jewish immigrants. His life was marked by a heart failure that was diagnosed early on. He dropped out of college early and went to Hollywood , where he was promoted to executive producer at Carl Laemmle's Universal Studios at the age of 20 . The two Stroheim films Foolish Wives and Merry-Go-Round were completed under his supervision .

Thalberg left the studio for personal reasons after rejecting the studio boss's daughter's proposal and went to the newly founded MGM film studio in 1924 as Louis B. Mayer's deputy . The first problem that he had to solve there was already known to him: He had to steer Erich von Stroheim's eccentric, time-consuming and costly way of working in a sensible way. In this respect, the final version of the film Greed is largely due to Thalberg's influence. Thalberg was responsible for MGM's major prestige productions: The Big Parade , The Merry Widow and others. He also managed to get a grip on the major project Ben Hur , which had been in production for a number of years and whose exploding costs threatened to endanger the existence of the studio, and to complete the film.

Thalberg was a perfectionist who had the success of a film analyzed through so-called previews , test screenings. If the response was not good, whole passages were sometimes re-shot, such as in the Marie Dressler comedy Prosperity or in the Joan Crawford film Laughing Sinners , in which the previous male lead actor Johnny Mack Brown was replaced by Clark Gable . This approach justified the famous sentence: “At MGM they don't make pictures, they remake them.” Thalberg was very successful in discovering and reawakening stars. Lon Chaney , Norma Shearer , Jean Harlow and Myrna Loy largely owed their careers and their revitalization to him. In 1932 he retired from the film business for more than a year due to chronic heart problems and returned at the beginning of 1934, only to take over the production of individual films thereafter. During this time he mainly took care of the productions of his wife Norma Shearer, whom he married in 1927. This favoritism was a constant nuisance, especially for Joan Crawford , as she felt she would only be resigned to second rate melodramas and rejected Shearer projects. When asked why Norma was so successful, although she was cross-eyed, had short legs and almost no waist, Crawford replied: “She sleeps with the boss. She rides the studio on his balls. "

In 1936 Thalberg died of pneumonia at the age of 37. At his lavish funeral, Mayer and Crawford are said to have been the happiest mourners. The relationship between Thalberg and Mayer had been strained for years. Mayer thought more cost-oriented when it came to productions and had a completely different taste in film than Thalberg. In retrospect, this can also be seen in the fact that after 1936 mainly cheerful family series à la Andy Hardy , light musicals and operettas with Jeanette MacDonald or Eleanor Powell and sentimental stories such as B. And Life Goes On or The White Cliffs of Dover were in the foreground in the productions. After Thalberg's death there was almost inevitably violent quarrels between his widow Norma Shearer and Louis B. Mayer over the interpretation of the will, which Shearer was supposed to guarantee a percentage return on Thalberg's last films. After many public attacks, which culminated in Shearer's dramatic radio appeal to the nation: “I have to go to the poorhouse!”, Both parties finally agreed on a compromise.

The Academy of Motion Picture Arts and Sciences dedicated a prize to Thalberg as one of its 36 founders after his death, the Irving G. Thalberg Memorial Award , which is awarded at irregular intervals for special services to the film industry and to the respective award winner during the Oscar ceremony is presented.

F. Scott Fitzgerald processed Thalberg's fate in the novel The Last Taikun , which remained unfinished because of his death and was published posthumously. In 1976, the novel was Elia Kazan with Robert De Niro in the lead role filmed .

In the course of just 14 years, Irving Thalberg was directly or indirectly involved in the production of 83 films. Here is a selection: