The tragedy of King Richard III (Eng. The Tragedy of King Richard the Third ) is a five-act drama by William Shakespeare about the English King Richard III. The work, created around 1592, is one of Shakespeare's histories and follows Henry VI. (Part 1 - 3) . It is the last part of the York tetralogy . The first print version appeared in 1597 as a four-high edition ; by 1622 five further single editions followed in quarto format. In 1623 the work was published in the first complete folio edition ; two subsequent four-high editions show the continued great popularity of the piece during the Elizabethan theater era . 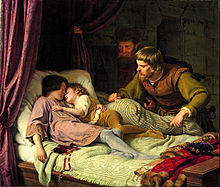 The murder of the sons of Edward IV , painting by Theodor Hildebrandt , 1835

Richard, Duke of Gloucester, discovers with no illusion that he is ugly and deformed: He is not suitable for an eloquent lover who taunts with the ladies at court to the sound of the noises: I, that am not shaped for sportive tricks, like him says (I.1, 14). He is so lame and crippled that dogs bark at him when they see him. It did not fit in with the boring times of peace that began with the victory of the House of York. He felt only hatred for the vain amusements of these days. Therefore, he decided to become a villain: And therefore, since I cannot prove a lover / to entertain these fair well-spoken days, / I am determined to prove a villain, / and hate the idle pleasures of these days. (I.1, 28 ff.)

To gain the crown, he must eliminate his two brothers, the reigning King Edward IV and George, the Duke of Clarence . Richard has no inhibitions as his rivals have also come to power through murder and violence. He slanders Clarence to the king, who locks the innocent in the tower . A little later Clarence is killed on Richard's orders and thrown into a barrel of Malvasia wine . Meanwhile, Richard is wooing Princess Anne, who reacts indignantly because she believes that Richard killed her husband, Prince Edward, and his father, King Henry VI. Although Richard had previously said this in a monologue with the words What the heck? (What though [I.1, 154]) has admitted, he proposes to Anne in the middle of the funeral procession for the murdered King Heinrich. To prove his love for her, Richard bares his chest and offers Anne his sword. She aims at him, but then drops the sword. Richard then accuses Queen Elizabeth of arranging for his brother Clarence to be captured. Heinrich's widow Margaret then cursed him that he should consider his friends traitors and traitors for his friends, and that he should no longer sleep soundly. Yet Richard thinks he has hidden his malice: And thus I clothe my naked villany / With odd old ends, stolen forth of Holy Writ, / And seem a saint when most I play the devil . (I.3, 334ff)

The sick King Edward, who in Richard's opinion has emaciated himself physically through fornication and mistresses, can once again restore peace to court. When Elisabeth asks him to accept his brother Clarence into his grace, Richard reveals that Clarence is dead. On this news, as Richard foreseen, Edward's health deteriorated, so that he died soon afterwards. Richard next has Elizabeth's brother Rivers and her first marriage son, Gray , arrested and executed. Elisabeth, seeing her family threatened, fled with her youngest son.

The youngest son is fetched back under a pretext and taken to the tower with his brother. One of the few who oppose the unscrupulous Richard is Lord Hastings : He does not want to allow the sons of the late king to be passed over in the line of succession; he is beheaded on Richard's orders. In consultation with Richard, his faithful, the Duke of Buckingham , is supposed to stir up a mood against the late king and his sons in London, but Buckingham's speech to the people is a failure. So they change their plan: Buckingham convinces the Mayor of London that Richard should become king according to the people's will. He lets Buckingham ask him to be crowned the next day. He initially refuses, claiming that he is so "humble" that he finally agrees with a "sigh".

Richard married Anne and was crowned king, but does not yet feel his power secured. Buckingham, who is therefore supposed to kill Edward's underage sons, shows scruples. So Richard hires a murderer to kill the two princes in the Tower. In order to maintain his rule, it would be better for Richard to marry the young Elizabeth , daughter of Edward IV. So he puts his wife Anne under house arrest, where she soon dies; at the same time he woos Elisabeth. But Richard's position has become uncertain because of his bloodshed. In France, under the leadership of Count Heinrich von Richmond from the House of Tudor, an opposing party has formed; numerous nobles take his side. Richmond goes to Wales , and Richard and his army meet him.

First of all, Buckingham, who fled and raised an army against Richard, but was caught by Richard's men, has to go under the ax. Meanwhile, Richmond is making headway : Thus far into the bowels of the land / Have we marched on without impediment (V.2, 3 f.). On the eve of the decisive battle at Bosworth , Richard meets in a dream the ghosts of Edward, King Henry and all others who have been murdered by him and prophesies his doom; But they encourage Richmond. The next morning the king's troops are put to flight, Richard's horse is killed: A Horse! A horse! My kingdom for a horse! (V.7, 7), he shouts desperately across the battlefield; he claims to have killed five people disguised as Richmond. Finally, Richmond and Richard meet in direct combat, Richard is killed. This ended the war between the Houses of Lancaster and York. Duke Henry will marry Elizabeth of York as King Henry VII and bring peace to England.

Comedies: Two Gentlemen from Verona  | The Taming of the Shrew  | The Comedy of Errors  | Lost labor of love  | A Midsummer Night's Dream  | The merchant of Venice  | The merry women of Windsor  | Much Ado About Nothing  | As you like it  | What you want  | Measure for measure  | All's well that ends well  | Pericles, prince of Tire  | The winter fairy tale  | Cymbeline  | The storm  | The two noble cousins .

Other works: sonnets  | Venus and Adonis  | Lucretia  | The pilgrim in love  | The phoenix and the turtledove  | Lovers' Lament  | Sir Thomas More .