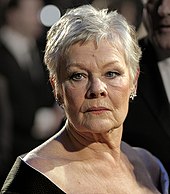 Dame Judith "Judi" Olivia Dench , CH , DBE , FRSA (born December 9, 1934 in York , North Yorkshire , England ) is a British actress . She has appeared in numerous Shakespeare productions and was a member of the Royal Shakespeare Company . In the James Bond film adaptations from GoldenEye (1995) to Specter (2015) Dench was seen in the role of " M ". She was also nominated six times for Oscar , including five times for Best Actress (1998 for Her Majesty Mrs. Brown , 2002 for Iris , 2006 for Lady Henderson , 2007 for Diary of a Scandal and 2014 for Philomena ) and won an Oscar in 1999 for best supporting actress for her portrayal of Elizabeth I in Shakespeare in Love . In 2016 she was honored with a Laurence Olivier Award for her role as Paulina in Shakespeare's A Winter's Tale at the Garrick Theater . It was her eighth overall award with this award, something that no actor has achieved before.

Born in York, Judi Dench grew up as the youngest child with four other siblings in Tyldesley, Greater Manchester. Her father Reginald Arthur Dench († 1964) worked as a doctor for the local theater. Her older brother is also an actor. Her mother, Eleanora Olive Jones, was from Dublin . As a Quaker, Judi Dench was raised in a strictly religious manner; According to her own words, her faith is still essential for her life and work today.

Judi Dench was married to actor Michael Williams since 1971 , who died of lung cancer in 2001 . Their daughter Tara (called Finty Williams ) was born on September 24, 1972 and later followed in her parents' footsteps. She has been dating environmentalist David Mills for a decade.

In an interview in February 2012, Dench stated that she suffered from macular degeneration , but would not lose her eyesight as a result.

Dench is an award-winning theater actress. She trained at the Central School of Speech and Drama in London and then played with the Old Vic Company . She toured the United States, Canada and Europe with the Royal Shakespeare Company . Her portrayal of "Juliet" in a production by Romeo and Juliet at the Old Vic brought her breakthrough at the age of 25. On stage she was mainly seen in classical pieces, for example as "Ophelia" in Hamlet , in the comedy Maß für Maß or the drama Heinrich V.

In 1968 she received various theater awards as "Sally Bowles" at the British premiere of the musical Cabaret . In the mid-1970s, she demonstrated her comic talent in Shakespeare's The Comedy of Errors and Much Ado About Nothing .

Dench was supposed to play "Grizabella" in the world premiere of Andrew Lloyd Webber's Musical Cats in 1981 , but had to leave the role to Elaine Paige due to an injury .

For her directorial debut she worked with the Renaissance Theater Company and directed Much Ado About Nothing for the 1988 season, starring Kenneth Branagh and Samantha Bond . This was followed by other directorial work such as Macbeth at the Central School of Speech and Drama and Romeo and Juliet.

Although the actress is also very successful with film and television appearances, she continues to perform regularly. In the 2009 season she appeared at Wyndham's Theater in a production of Mishima Yukio's Madame De Sade . In 2010 she was voted number one among the “best British theater actors of all time” in a poll by the British industry magazine The Stage .

Dench has appeared repeatedly on television since the 1960s. Most of them were Shakespeare or other literary adaptations. Her presence in these productions earned her multiple praise from critics and the BAFTA Television Award several times. In addition, she appeared for years in the television series A Fine Romance (1981-1984) and As Time Goes By (1992-2004).

Dench made her cinema debut in the film The Third Secret in 1964 . Since then, in addition to her work at the theater, she has regularly appeared in cinema and television films. In 1968 she played “Titania” in a film adaptation of A Midsummer Night's Dream , which she had already portrayed on stage. In 1974 she played Luther's wife Katharina von Bora in the film . For her role in the film adaptation of EM Forster's novel Zimmer mit Aussicht , Dench received the British Academy Film Award in 1987, as did her colleague Maggie Smith . Other literary adaptations such as Henry V or Hamlet followed .

In 1995, the actress played the role of "M" in the James Bond series. In 2012, she embodied in James Bond 007: Skyfall for the seventh and last time the head of the British secret service MI6 . In the same film, Ralph Fiennes was introduced as her successor. In the follow-up film James Bond 007: Specter (2015), she had a short appearance.

Dench was nominated for an Oscar in 1998 for her portrayal of Queen Victoria in Her Majesty Mrs. Brown , but lost to Helen Hunt at the award ceremony . The following year, at the 1999 Academy Awards , she was successful with her seven-minute appearance as " Elizabeth I " in Shakespeare in Love .

In 1999 the actress stood in front of the camera with her friend Maggie Smith and Cher , Lily Tomlin and Joan Plowright for Franco Zeffirelli in tea with Mussolini .

She played alongside Johnny Depp and Juliette Binoche in the film Chocolat - A small bite is enough for a diabetic who, against her daughter's advice, passes the time in the chocolaterie . In 2001 she worked again with the director Lasse Hallström in the drama Ship Reports .

In 2004 Dench starred again alongside Maggie Smith in The Scent of Lavender . The film received mixed reviews, but the performances of the two leading actresses received positive reviews. In the same year Judi Dench was the voice actress for the film The Cows Are Going , the spoken by her “Mrs. Caloway ”was dubbed in the German version by Christiane Hörbiger .

For her role as the history teacher "Barbara Covett" in The Diary of a Scandal , Dench was nominated for several film awards.

The German voice actress for Judi Dench was Gisela Fritsch until mid-2013 . Since Fritsch's death, Kerstin de Ahna has been dubbing Dench.

British fashion magazine Vogue put Dench on its cover in 2020 and made Dench the oldest cover girl ever to appear on the magazine's cover at the age of 85.