The Golden Raspberry ( English Golden Raspberry Award , shortly Razzie ) is a first time in 1981 award Negative - Film Award . The Razzie was created as a kind of anti- Oscar by the film buff John JB Wilson and is traditionally awarded in several, sometimes absurd categories for the worst performance of the film year on the evening before the Academy Awards. The winners trophy , almost worthless in material terms, consists of a plastic raspberry glued to a Super 8 film roll made of aluminum and coated with gold paint.

The award is named after the English phrase to blow a raspberry in the sense of "making a fart sound with the mouth" (literally "blowing a raspberry"). This originally comes from the Cockney rhyming slang , a London variety of English in which common words are replaced by rhyming words or phrases. So instead of fart (“fart”) it is called raspberry tart (“ raspberry tart ”), which in turn appears in abbreviated form to blow a raspberry . The gesture is considered an "expression of disapproval or contempt".

The award is backed by the Golden Raspberry Award Foundation (GRAF), which in 2007 included more than 750 film critics, journalists and filmmakers from 42 US states and more than twelve countries. The Munich Film Workshop nominates 50 people from Germany to take part in the vote.

The 38th Golden Raspberry Awards were on March 3, 2018 the eve of the Oscar ceremony , in California's Hollywood ( Los Angeles awarded). The 39th award ceremony took place on February 23, 2019. In 2020, the official award ceremony had to be canceled due to the COVID-19 pandemic . The winners were announced on March 16 on YouTube . 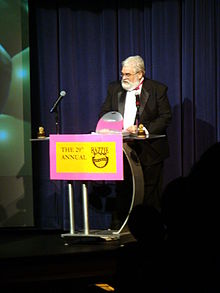 Categories awarded for a special occasion

Looking back over a decade, particularly bad films and filmmakers are awarded Golden Raspberries again, as happened in the 1980s , 1990s and 2000s . During the award ceremony for the Golden Raspberry 2000 , the worst actress and the worst actor of the century were chosen for the 20th century. On the occasion of the 25th anniversary of the Golden Raspberry, trophies for the worst in 25 years were presented at the 2005 awards ceremony . From 2015 the Razzie Redeemer Award ("Raspberry of Redemption") will be presented. This is awarded to an artist who was awarded the Golden Raspberry or was nominated for it and who later delivered a remarkable artistic achievement. It is not yet clear whether this category will be established permanently.

Awarding of the Golden Raspberry by category

Awarded the Golden Raspberry after years